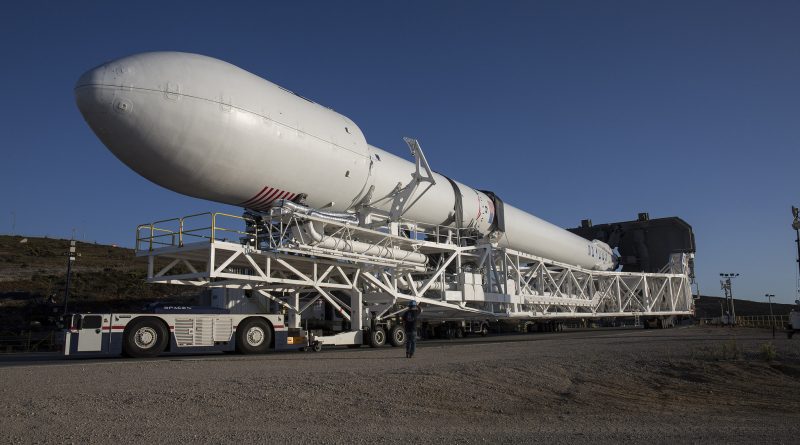 Iridium Communications announced on Thursday the company reached an agreement with SpaceX for the use of flight-proven Falcon 9 boosters on the next two launches supporting the Iridium-NEXT constellation in order to keep up the pace of their fleet replacement, planned to be complete by mid-2018.

Iridium-4, the first launch from Vandenberg of a previously flown Falcon 9, has received an updated launch date of December 22 and will mark the mid-point of the Iridium replacement effort, lifting satellites 31-40 and capping a busy year of four Iridium launches.

Iridium signed its original launch contract with SpaceX in June 2010 for a total of $492 million, covering the launch of 70 Iridium-NEXT satellites on seven Falcon 9 rockets. An eighth launch was added to the manifest in January 2017 that will carry five instead of ten satellites and share a ride with a pair of gravity-sensing satellites flying under the GRACE Follow-On Program, a joint U.S.-German mission. These launches will place a total of 75 Iridium-NEXT communications satellites into orbit, 66 of which will enter active service within the constellation while the others act as spares to go into service on short notice.

Iridium had previously emphasized their contracts are for factory-new Falcon 9 rockets and that extensive reviews of SpaceX’s re-use capabilities as well as financial incentives or schedule advances would be needed to convince them to switch to what SpaceX markets as ‘flight-proven’ first stages.


“Iridium has reached agreement with SpaceX to utilize flight-proven first stages for the next two Iridium launches,” the company said in a statement issued on Thursday. “Iridium conducted extensive due diligence work and is fully confident in the SpaceX booster refurbishment program.”

The agreement signed with SpaceX covers only the next two Iridium-NEXT missions, Iridium-4 on December 22 with satellites 31-40 and Iridium-5, working toward launch in early 2018, with Iridium-NEXT satellites 41-50.

“I believe that reusability is the future for satellite launches, and I think SpaceX has intelligently built their Falcon 9 program around this strategy,” Iridium CEO Matt Desch said in Thursday’s announcement. “With three successful flight-proven Falcon 9 launches already this year, we’re excited to show leadership towards the sustainable access to space while also making sure we maintain our cadence to complete the five remaining Iridium NEXT launches by the middle of next year.”


SpaceX successfully flew three re-use missions this year and demonstrated to potential customers as well as insurers that the company’s flight-proven rockets can reliably launch satellites into orbit. An important part of Thursday’s announcement was that the switch to used boosters will come at no additional insurance cost for Iridium, a major requirement for SpaceX’s vision of reducing launch costs through re-use.

“Iridium confirmed with its insurers that there is no increase in premium for the launch program as a result of the use of flight-proven Falcon 9 rockets, further supporting Iridium’s conclusion that the risk profile is unchanged,” the company’s statement said.

For its initial re-use flights earlier this year on the SES 10, BulgariaSat-1 and SES 11 missions, SpaceX worked extensively with customers and insurers to share data from the company’s re-use testing, the first batch of recovered boosters and lifetime analysis for the various components of Falcon 9’s first stage. This allowed the first re-use mission in March to launch with only a marginally higher insurance premium incurred by satellite operator SES.

The success of the first Falcon 9 re-use missions also prompted NASA to begin reviews into possibly using flight-proven rockets for SpaceX’s Commercial Resupply Services missions to the International Space Station. Per the latest, NASA finished the technical review process and management was expected to make a firm decision by November. This decision may or may not be in time for the Dragon SpX-13 mission, currently targeting a NET December 4 liftoff from Florida.

Beginning to gain traction in the commercial and government sectors, SpaceX’s re-use business is already helping the company deal with its packed manifest as each re-use mission aids in the major manufacturing bottleneck which has been the production of new first stage boosters. SpaceX hopes to make rapid and cost-effective re-flight a reality with the inauguration of the Falcon 9 Block 5 vehicle that will represent the final iteration of the workhorse launcher, optimized for performance and re-use.

With the continued migration of multiple operators to flight-proven first stages, SpaceX needed less than a year to make re-use a substantial part of its business with up to 25% of the company’s 2017 manifest flying re-used hardware – provided SpX-13 launches on a previously flown booster.

SpaceX and Iridium did not disclose potential discounts for the swap to flown boosters, but the decision was likely in part due to Iridium’s desire to keep to its planned deployment schedule which may not have been possible with the bottleneck of first stage production.


Which of SpaceX’s recovered first stages will be assigned to the Iridium-4 mission has not been disclosed yet. With the mission moving from a late November target to its new NET of December 22, the flight is looking at a post-sunset blastoff from Vandenberg’s SLC-4E at 5:26 p.m. Pacific Time, 1:26 UTC on December 23rd.

Per Iridium’s revised deployment plan, the Iridium-4 mission will be targeting Plane 2 of the six-plane constellation with eight satellites expected to go into service and two drifting over into Plane 1. Iridium-5, the second to fly with a used first stage, will target Plane 1. Whether future Iridium missions will also use flight-proven hardware was left open, but will largely depend on the success of the upcoming launches.