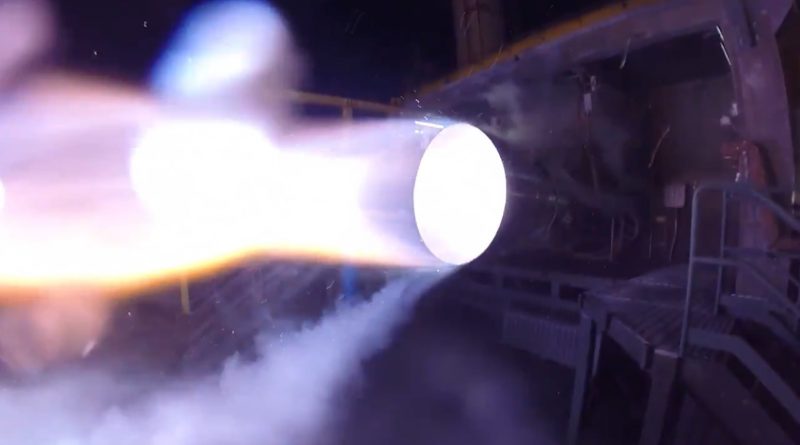 Blue Origin this week conducted the first hot fire test of the company’s BE-4 engine, hoped to become the future workhorse for Blue’s own New Glenn heavy-lift launch vehicle as well as United Launch Alliance’s upcoming Vulcan rocket. Wednesday’s brief test firing marked a major step towards certifying the engine for service before the end of the decade to support the company’s ambitious goals of becoming a major competitor on the commercial launch market.


Entering development at the start of the decade, BE-4 had a long path to the test stand including a fairly major re-design when United Launch Alliance opted for Blue’s engine as the prime candidate for Vulcan, requiring the engine to grow in size to deliver the thrust needed to lift the vehicle. Early in 2017, Blue Origin lost a set of powerpack hardware in a test anomaly, showcasing the inherent difficulties in developing a high-performance engine.

According to Ars Technica, Wednesday’s test at the company’s facility in West Texas operated the BE-4 engine at a 50-percent power setting [~1,200 Kilonewtons] and ran for three seconds. A Tweet from Blue Origin shows video from different angles that indicates a stable burn and shutdown sequence.

First hotfire of our BE-4 engine is a success #GradatimFerociter pic.twitter.com/xuotdzfDjF


New Space Company Blue Origin has found itself in competition on two fronts recently. While the competition between Blue Origin and SpaceX had been highly publicized, the actual competitor for BE-4 is not found in the New Space sector but in rocket propulsion giant Aerojet Rocketdyne. When announcing the Vulcan rocket as the eventual replacement for the expensive Delta IV and Russian-reliant Atlas V, United Launch Alliance emphasized it preferred Blue Origin’s BE-4 engine but also selected Aerojet’s proposed AR-1 as a fallback plan.

Aerojet Rocketdyne, having built most engines powering the U.S. space program to date, began a heavy lobbying campaign against BE-4, primarily hinging on Blue Origin’s inexperience when it comes to the design of such large, complex engines, citing the BE-4 was unproven at the required size and power. With Wednesday’s successful test, Blue Origin has made the first major step in delivering visible results and backing up claims that BE-4 is significantly ahead of AR-1 and in a position to support the in-service goal of ULA’s Vulcan rocket.

In contrast to AR-1 that has received $228 million in government funding, BE-4 was developed solely with private funding from Blue Origin and Amazon founder Jeff Bezos. SpaceX is also developing its engines with private money, having spent the last several years optimizing their Merlin engine to squeeze the maximum performance out of the company’s Falcon 9 vehicle to make first stage reusability a reality.

SpaceX has now turned attention toward their own Liquid Methane/Liquid Oxygen engine named Raptor – hoped to become the driving force behind the company’s interplanetary efforts. A sub-scale version of Raptor reached the test stand in 2016 and has since completed dozens of firings, though the final version of Raptor has been downsized from an initial thrust target of 3,050kN to 1,700kN as part of the natural design evolution of SpaceX’s ‘Big Falcon Rocket.’ This would make BE-4 the most powerful CH4/LOX engine once reaching its target thrust of 2,400 Kilonewtons.

Blue Origin has emphasized a step-wise approach to achieving ambitious goals, becoming evident in the company motto of “Gradatim Ferociter” – Latin for “Step by Step, Ferociously.” Initially, the company focused on development of the smaller, full cryogenic BE-3 engine and the New Shepard sub-orbital vehicle that is about to finish its test program before entering service for tourist and science flights to the edge of space and back. As design work on New Shepard finished, Blue Origin took the next step and initiated development of their New Glenn orbital vehicle.

Also, the company employs a hardware-rich development architecture compared to a design- and simulation-focused development – allowing for iterative changes to optimize designs for performance and cost.

As one of the largest methane-fueled engines ever built, BE-4 entered unknown territory when reaching the test stand as issues like combustion instability proved to be hard to model and were expected to be ironed out during an iterative testing phase. Wednesday’s test, although only of short duration, will have provided Blue Origin a wealth of valuable data on the engine’s start-up characteristics and potential transients as the combustion process stabilizes followed by a brief period of steady-state operation at the 50% thrust setting.

Vulcan will employ a pair of BE-4 engines on its first stage plus up to six GEM-63XL Solid Rocket Boosters that will be used to size the rocket to each payload’s specific requirements. The trusted Centaur upper stage will reprise its role in the first several years of the Vulcan program before ULA’s Advanced Cryogenic Evolved Stage (ACES) takes on the role of the upper stage in the second half of the 2020s.

Seven BE-4 engines will power Blue Origin’s New Glenn rocket, giving it a thrust of 17.1 Meganewtons – about half that of the mighty Saturn V. The rocket’s second stage will be powered by a vacuum-optimized version of the BE-4 sporting an extended nozzle.

The 82-meter tall two-stage vehicle will be used for heavy-lift missions to Low Earth Orbit while high-energy deliveries to GTO and Beyond Earth Orbit would be handled by a 95-meter tall version sporting a cryogenic third stage powered by a version of Blue’s BE-3 that is already flying on the New Shepard sub-orbital vehicle. According to remarks by Jeff Bezos earlier this year, New Glenn will be able to carry 45 metric tons into Low Earth Orbit and 13 metric tons to Geostationary Transfer Orbit.