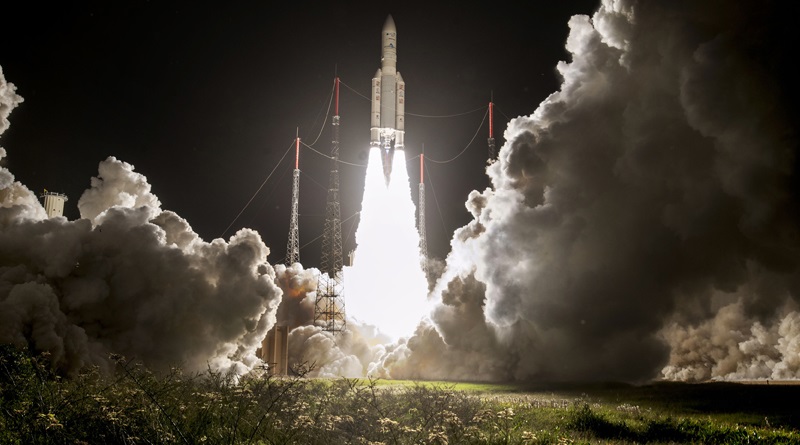 The Intelsat 29e satellite, launched atop an Ariane 5 rocket on Wednesday, received a smooth ride into Geostationary Transfer Orbit and finished its initial checkouts, now ready to begin the climb to Geostationary Orbit for a 15-year mission delivering high-capacity communications services to the Americas and the Trans-Atlantic flight route.

Intelsat opted for a single-payload mission on the Ariane 5, footing the bill for an entire Ariane 5 launcher instead of splitting the cost with another satellite operator placing a co-passenger atop the rocket. This decision was made to avoid a lengthy wait for a co-passenger in the three-metric-ton range as Intelsat needed the company’s first EpicNG satellite in orbit to begin offering services as part of Intelsat’s new communications architecture.

The Ariane 5 rocket carrying the 6,552-Kilogram satellite rumbled off from its Jungle Launch Pad at the Guiana Space Center at 23:20 UTC on Wednesday for a fast trip across the Atlantic Ocean, aiming for a low-inclination orbit. The rocket fired its two powerful boosters until T+2 minutes and 24 seconds before relying on the Vulcain 2 cryogenic main engine for another five and a half minutes. Handing off to the HM-7B engine of the second stage for a 16-minute burn, Ariane 5 finished boosting the satellite into orbit for spacecraft separation right at the T+30-minute mark.


Because Ariane 5 can lift over ten-metric tons into a standard GTO, this mission leveraged the excess performance for an additional reduction of inclination completed during the second stage burn. The VA228 mission aimed for an orbit of 249 by 35,546 Kilometers at an inclination of 0.5 degrees. Orbital tracking of the Intelsat 29e and the spent Ariane 5 ESC second stage showed the two objects in the following orbits:

After separation, the satellite stabilized its orientation and checked in with a ground station in South Korea just over an hour after launch, delivering good health data and confirming that the spacecraft was in good condition after its thundering liftoff and trip into orbit.

Intelsat 29e was up for three days of initial testing and reconfigurations to ready its propulsion system for the start of apogee-raising maneuvers on Saturday. Orbit-raising will continue until February 7 to place the satellite in a testing position in Geostationary Orbit for the deployment of the twin solar arrays and the antenna reflectors between February 8 and 10.

In-orbit testing, conducted by satellite manufacturer Boeing, will be completed by March 13 followed by the re-position of the satellite to 310°E in Geostationary Orbit from where the spacecraft will enter service on March 24. Intelsat 29e is set to be transitioned to operational use in the second quarter of 2016.

The satellite, designed with high service flexibility as a primary driver, combines high-throughout spot beams in the Americas to deliver telecommunications and enterprise connectivity, plus wide-beam coverage of the Atlantic Ocean and the Caribbean for airborne and maritime communications services.