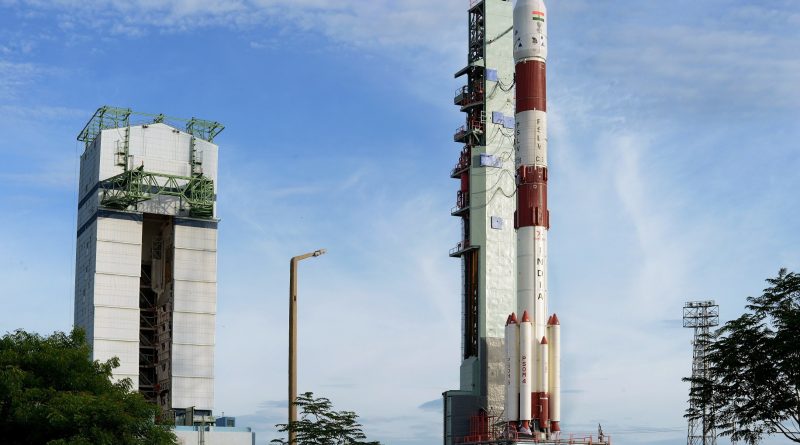 India’s Polar Satellite Launch Vehicle is set for its first multi-orbit mission on Monday, lifting a group of eight satellites into two different orbits for operators from India, the U.S., Canada and Algeria.

Liftoff from the Satish Dhawan Space Center is targeted for 3:42 UTC on Monday to mark PSLV’s fifth launch of 2016.

Monday’s launch will set a new record for PSLV that, to date, has not flown more than four times in a calendar year. The Indian Space Research Organization has continuously stepped up its game in recent years, establishing a steady launch pace using the PSLV and demonstrating the reliability of the larger GSLV rockets.

If occurring on schedule, PSLV-C35 will also mark the first time in ISRO’s history that two orbital launches were conducted in the same calendar month, coming on the heels of the successful GSLV F05 mission that lifted the INSAT-3DR weather satellite into a Geostationary Transfer Orbit.


India’s PSLV workhorse made its debut in 1993 and has since been established as a cost-effective and reliable launch vehicle, receiving regular international business and building the backbone of the Indian launch vehicle fleet while the heavy-lift GSLV variants slowly establish a regular flight rate.

However, while cost effective, PSLV was not able to support flexible mission designs and its payloads all needed to be compatible in their initial drop-off orbit.

Lifting satellites into different orbits requires multiple re-starts of the rocket’s upper stage – a capability that was not part of PSLV’s repertoire when designed to lift satellites into polar orbits.

On popular request by the customer base, ISRO engineers determined that re-starting the L-2-5 engines of the PSLV would be possible without any major changes to their design to enable multi-orbit deliveries.

Work went into designing new propellant handling techniques for the PS4 upper stage with particular focus on propellant settling prior to engine start-up to ensure the engines only ingest liquid propellants and no gas bubbles. Additional power margin was added to the PS4 and thermal control algorithms for extended coast periods in orbit were developed to allow PSLV to conduct missions of several hours.

The first test of re-starting the fourth stage of the PSLV came in December 2015 on the C29 mission, successfully achieving a stable five-second burn that provided valuable performance data needed to clear the PS4 for operational multi-burn missions. A second test performed in June was a complete dress rehearsal for a two-orbit mission including two PS4 re-starts spaced by half an orbit to verify the performance of the engine and also put the new management, control and guidance schemes to the test.

Monday’s flight will take the PSLV straight into a 730-Kilometer Sun Synchronous Orbit, following a standard ascent profile flown dozens of times on operational missions. The 17-minute climb into orbit will set up for the separation of the SCATSat-1 spacecraft that will be tasked with measuring ocean surface winds to deliver vital data for weather forecasting models.

With the 371-Kilogram main passenger on its way, PSLV will still have seven satellites on board, aiming for an orbit of 689 Kilometers at a slightly higher inclination.

To deliver the satellites to their target, PSLV will fire its engine again for two 20-second burns one hour, 22 minutes and two hours, 11 minutes after launch ahead of a rapid sequence to deliver three satellites for Algeria, a Canadian CubeSat, an American Earth Observation satellite, and two Indian tech demo satellites.

PSLV utilizes its Regular Version on Monday that has not flown in five years and fills a spot between the performance of the Core Alone version without boosters and the XL with its stretched boosters.

Standing 44.5-meters tall, PSLV-G has a launch mass of 295 metric tons and utilizes a combination of solid-rocket motors and liquid-fueled engines – taking advantage of the raw power of solids and the controllability of liquid rocket engines.

PSLV uses one of the world’s largest solid rocket motors as its first stage, holding 138 metric tons of propellant and generating a thrust of 4,860 Kilonewtons. It is supported by six Solid Rocket Boosters, four of which start on the ground while the remaining two ignite 25 seconds after liftoff and burn for 45 seconds, each generating 503kN of thrust.

Stage 2 burns a storable propellant combination, featuring a 799kN Vikas 2 engine that fires for two and a half minutes and burns nearly 41 metric tons of hypergolics. Sitting atop its another solid-fueled stage, designated PS3, holding 6,700 Kilograms of propellant for a 112-second burn to accelerate the stack almost to orbital velocity.

PS4, the main actor on Monday’s mission, hosts a pair of liquid-fueled engines that consume two metric tons of propellants over the course of their burns, generating 14.6kN of thrust to push the stack into orbit and complete orbital maneuvers.

PSLV was cleared for its Monday morning liftoff on Friday when the Launch Authorization Board (LAB) conducted its final review and provided the green light for a 48-hour countdown that started early on Saturday. Over the course of the lengthy countdown, PSLV’s second and fourth stages plus the roll control system on the core will be loaded with propellants. The final hours of the countdown on Monday will include a last checkout of the launcher before the final reconfigurations are performed to prepare the vehicle for liftoff.

Leaping off its launch pad with a thrust of 800 metric-ton-force, PSLV will face the usual dogleg maneuver to avoid flying over the island of Sri Lanka. Initially headed to the south-east, PSLV will drop its boosters 68 and 90 seconds into the flight followed by burnout and separation of the core stage at T+1:54 to set up for the ignition of the second stage and a guided turn to the south-south-west once clear of the island.

Conducting its two-and-a-half-minute firing, Stage 2 will lift the stack out of the discernible atmosphere, allowing PSLV to drop its payload fairing two minutes and 41 seconds into the flight.

Stage 3 assumes control of powered flight just before the T+4.5-minute mark to accelerate the vehicle to over six Kilometers per second.

The fourth stage will ignite for the first time 12 and a half minutes after liftoff, following a lengthy coast after third stage burnout that enables the stack to climb to an altitude of 680 Kilometers. The PS4 burn will be four and a half minutes in duration, aiming for a circular orbit at 730 Kilometers, inclined 98.1 degrees for the release of SCATSat 17.5 minutes after launch.

With the upper passenger on its way, the PS4 stage begins a coast phase of 65 minutes, circling the Earth for the second burn to occur over the North Pole, aiming to lower the perigee to 689 Kilometers. After completion of the 20-second burn, the vehicle will coast for half an orbit to descend to 689 Kilometers ahead of another 20-second retrograde burn to circularize the orbit at the lower altitude.

If everything goes according to plan, PS4 will arrive in the 689km orbit two hours and 12 minutes after lifting off, quickly jettisoning its Dual Launch Adapter to reveal the seven secondary payloads – set for a rapid release sequence taking just 130 seconds.

First to leave the upper stage are the two 3U CubeSats on this flight – AlSat-1N operated by Algeria and the UK to test out a number of new technologies for SmallSat missions, and the Canadian CanX-7 which will deploy an innovative drag sail to demonstrate a passive deorbiting system.

Next up for separation are two Indian educational satellites – Pratham which carries a Total Electron Count instrument and PiSAT, outfitted with a miniaturized Earth-imaging camera.

Two more Algerian satellites are traveling to orbit atop PSLV – AlSat-1B representing a cooperation between the Algerian Space Agency and Surrey Satellite Technology Ltd. to develop a medium-resolution Earth-imaging satellite, and AlSat-2B that was built with Airbus Defence and Space and carries a variation of the NAOMI high-resolution imager.

The final passenger to depart the upper stage will be the first satellite in the BlackSky constellation that aims to deploy up to 60 satellites in the coming years to establish a commercial Earth-imaging architecture with unparalleled revisit rates.