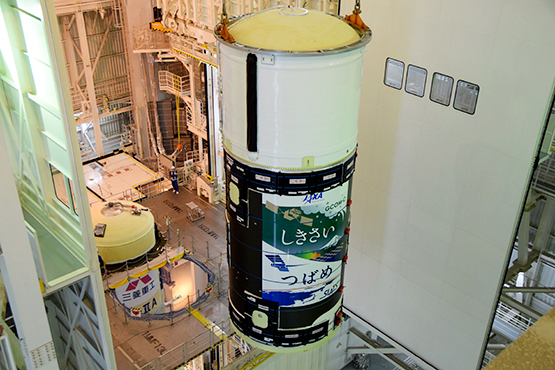 An H-IIA rocket is assembled at Japan’s Tanegashima Space Center in preparation for launch with the GCOM-C1 and SLATS satellites in December 2017 to close a record-setting year for the workhorse launcher. GCOM-C1 and SLATS are a very different duo, weighing in at two-metric tons and 400kg, respectively. The GCOM-C1 satellite will be deployed into a 800-Kilometer Sun Synchronous Orbit from where it will monitor changes on Earth while SLATS will require H-IIA to demonstrate its multi-orbit-mission capability by performing an additional two engine burns to drop the satellite off in a lower orbit from where it will further reduce its altitude to begin orbiting on the edge of the atmosphere.