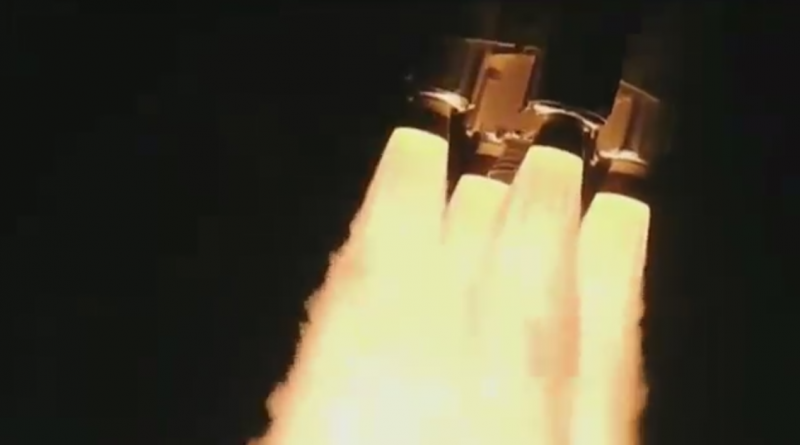 Japan’s H-IIA rocket lifted off from the picturesque Tanegashima Space Center on Tuesday, successfully carrying the DSN-2 military communications satellite into orbit to upgrade the secure X-Band communications system used by the government and armed forces.

The semi-classified mission took off at 7:44 UTC on Tuesday, 4:44 p.m. local time as H-IIA thundered away from Tanegashima with four Solid Rocket Boosters providing the necessary kick to send the heavy satellite on its way. Within seconds of liftoff, the 53-meter tall rocket disappeared into low-hanging clouds, headed to the south east to lift DSN-2 into a Geostationary Transfer Orbit.

Due to the semi-classified nature of the mission, no official live transmission was available for the launch and H-IIA completed its half-hour climb without the public watching, sending DSN-2 on its way after two burns of the rocket’s upper stage to begin a 15-year mission providing secure communication channels to the Japanese military.

Although Tuesday’s launch lofted a satellite to be primarily used by the government, it counted as the second fully commercial launch of the H-IIA rocket because the satellite and launch vehicle were procured with private funds under DSN’s Private Finance Initiative. The program is operated by an industrial consortium that puts up the initial investment to built and deploy the DSN space segment and then bills the Japanese government on an annual basis for as long as services are provided – at least into the 2030s.


The DSN space segment is designed to consist of a dedicated satellite – DSN-2, launched on Tuesday, and a hosted payload on a commercial communications satellite – DSN-1, currently looking at a 2018 launch target after suffering a significant delay. The project also includes upgrades to Japan’s ground segment infrastructure to create a more-capable system for use by military forces on land, at sea and in the air.

DSN Corporation was formed specifically for the DSN program, with satellite operator SKY Perfect JSAT holding the majority of shares and responsible for overall project management, procurement and operation of the space segment. Technology company NEC and telecommunications provider NTT each hold 17.5% of shares with NEC acting as developer of the dedicated DSN-2 satellite & in charge of ground segment upgrades while NTT provides technical assistance and ground segment maintenance.

DSN was originally planned to enter operations in 2016 with DSN-1 expected to launch in late 2015, but that mission slipped to mid-2016 and then encountered a major setback when the Superbird 8 satellite – on which DSN-1 is hosted – suffered an overpressurization event during transport to its French Guiana launch site.

DSN-2 was developed by NEC, acting as prime contractor, with Mitsubishi Electric in a subcontractor role, providing the DS-2000-based satellite platform. DS-2000, first flown in 2002, is a popular satellite bus for application in communications and has shown excellent reliability and durability in the missions it has completed. Due to the semi-classified nature of the DSN missions, no details on the satellite and its X-Band payload were published.

Based on the type of launch vehicle in use for this mission, the mass of the DSN-2 satellite can be narrowed to around four to six metric tons, fairly typical for DS-2000 satellites.

It has not been officially announced from where the satellite will operate, but press reports indicate DSN-2 will take up station over the Indian Ocean from where it can cover the Japanese territory and forces stationed abroad. The satellite will be used to connect Japanese military units on land, naval vessels and the air forces of Japan. According to media reports, DSN-2 will support UN contingents in South Sudan and provide services for operations against Somalian sea pirates.

Built and operated by Mitsubishi Heavy Industries, H-IIA flew in its powerful 204 configuration on Tuesday, enlisting the help of four Solid Rocket Boosters to send the satellite into its planned elliptical orbit around Earth. It marked the third flight of the 204 version, currently the most powerful H-IIA version that is available.

H-IIA is a two-stage launch vehicle with both of its stages fueled by cryogenic propellants, Liquid Oxygen and Liquid Hydrogen. Standing 53 meters tall, the rocket has a four-meter core diameter and weighs in at 443 metric tons at liftoff.

H-IIA 204 flew for the first time in December 2006, lofting the Kiku-8 experimental communications satellite into Geostationary Transfer Orbit. Originally built for a three-year mission, the satellite was retired on January 10 of this year after ten year’s of operation. The second 204 mission came in November 2015 with Telstar 12V, marking H-IIA’s first fully commercial mission and the first to an ‘Upgraded Geostationary Transfer Orbit’ via enhancements on the rocket’s second stage.

H-IIA headed into a long countdown in the late hours, local time, on Monday when the rocket emerged from its Assembly Building for the 500-meter move to Launch Pad 1. The rocket headed into testing at X-8.5 hours followed by the initiation of propellant loading around the seven-hour mark, filling the two-stage rocket with 120 metric tons of cryogenics.

Testing continued throughout the countdown and H-IIA was prepared for its automatic countdown sequence heading into the last hour of the day’s count. As the countdown switched to auto-mode at X-4.5 minutes, H-IIA pressurized its propellant tanks, transferred to internal power and switched to onboard control before activating thermal batteries and completing a final thrust vector control check to clear the way for ignition.

The LE-7A engine was commanded to ignite at X-5.2 seconds, soaring to 86,000 Kilogram-force of thrust before the four boosters were fired up when clock hit zero – catapulting H-IIA off its launch pad with a thrust of 1,034 metric ton-force. After rising vertically for just a few seconds, H-IIA made its pitch and roll maneuver, starting a south-easterly flight path across the Pacific Ocean.

Heading uphill, H-IIA pushed through the sound barrier and passed Maximum Dynamic Pressure at the one-minute mark into the flight – burning 2,550 Kilograms of propellant each second of powered flight. Each of the SRB-A3 boosters of the H-IIA rocket delivered 2,305 Kilonewtons of thrust, measuring 15.1 meters in length and 2.5m in diameter, burning 66 metric tons of propellant during the first 116 seconds of powered flight.

After the boosters dropped away, H-IIA continued onward powered by its core stage alone, burning 260 Kilograms of cryogenics per second to generate 109,000 Kilogram-force of thrust as the vehicle departed the dense atmosphere.

Overall, the first stage of the H-IIA is 37.2 meters long and 4 meters in diameter, hosting the 3.7-meter long LE-7A engine that burned through a total of 103 metric tons of propellants. Passing 150 Kilometers in altitude, just over three minutes and into the flight, H-IIA separated its four-meter payload fairing, revealing the DSN-2 satellite as aerodynamic forces were no longer a danger.

Approximately six minutes and 40 seconds into the flight, the first stage shut down its LE-7A engine after boosting the vehicle to over 6 Kilometers per second. Stage separation occurred eight seconds later and was followed after another six seconds by the ignition of the LE-5B engine of the second stage.

The second stage of the H-IIA is 9.2 meters long with a diameter of 4 meters, operating at a nominal thrust of 13,970 Kilogram-force. The second-stage’s first burn was around five minutes in duration and lifted the stack into a preliminary parking orbit just over 200 Kilometers in altitude.

Following completion of the mission’s initial propulsive phase was a coast phase of around 12 minutes to allow the vehicle to continue heading south east in order to fire the engine again when passing the equator so that the high-point of the orbit can be placed above the equator as well – standard practice in GTO launches. The second burn was expected to be around three minutes in duration and significantly raise the apogee of the orbit and set up for separation of the DSN-2 satellite just over half an hour after launch.

Given the secretive nature of the mission, no target orbital parameters were released. Orbital data for the satellite will not be available through official channels, though satellite trackers will likely identify the spacecraft and keep tabs on where it will settle in Geostationary Orbit.

Japan’s next orbital launch is set for March 16 when H-IIA will lift a classified IGS reconnaissance satellite.