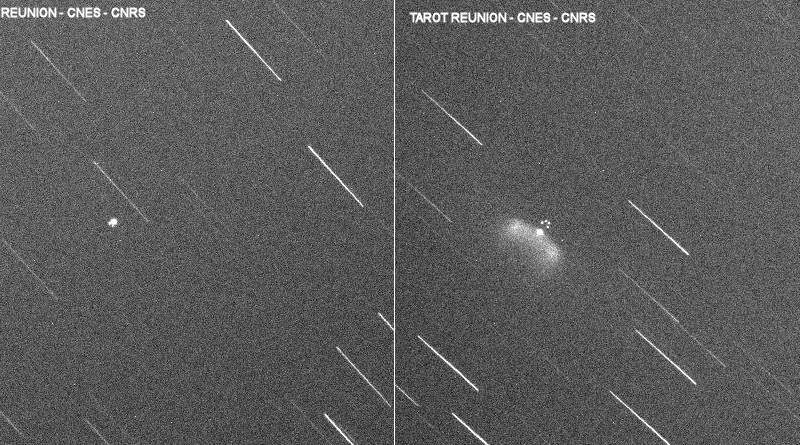 Unique photos captured last week’s Ariane 5 launch with a quadruplet of Galileo navigation satellites but observers also had eyes high in the sky to capture equally tantalizing views of the four satellites arriving at their orbital destination nearly 23,000 Kilometers above the Earth.

Last Thursday’s launch marked the first Galileo quadruplet delivery after the first 14 satellites were lifted as single payloads or pairs atop Soyuz rockets. It was the longest mission flown by the Ariane 5 rocket to date, requiring the vehicle to operate for over four hours from liftoff through the end of its orbital delivery mission.

Ariane 5 lifted off from the Guiana Space Center at 13:06 UTC on November 17, rumbling to the North-East under the power of its two Solid Rocket Boosters and liquid-fueled Vulcain 2 main engine. The twin boosters accelerated the rocket to over two Kilometers per second and dropped away at T+2 minutes and 23 seconds with Ariane 5 continuing uphill powered by the core stage alone. Vulcain 2 shut down just shy of T+9 minutes and handed powered flight duties of to the EPS Second Stage.


To support the lengthy mission, EPS had its electrical and thermal systems modified and structural improvements were made to shed weight from the upper composite to enable it to deliver the four satellites to their target orbit, coming at a total payload mass of 3,290 Kilograms – including the purpose-built payload adapter. The EPS first fired its Aestus engine for 11 minutes to place the upper composite into an elliptical transfer orbit peaking at 22,900 Kilometers ahead of a three-hour coast phase to enable the stack to climb all the way to the high point of the orbit.

A second burn of six and a half minutes circularized the orbit at 22,900 Kilometers – just over 300 km short of the operational orbit of the Galileo constellation. Inserting the satellites into a lower orbit avoids populating the constellation with dead satellites in case one fails to power up after launch. The four Galileo satellites were sent on their way in pairs separated by 20 minutes at T+3 hours 35 minutes and T+3:55.

The four 717-Kilogram satellites slowly drifted away from the EPS upper stage and were imaged by the TAROT Telescope – Rapid Action Telescope for Transient Objects located on Réunion Island. The image, collected at 17:23 UTC or 21 minutes after the second pair was separated, shows the four satellites as small dots moving away from the EPS which – by the time the picture was taken – was venting propellant and going through its passivation sequence.

TAROT, operated by CNES and CNRS, comprises several telescopes located in France, Chile, and Reunion that have been gathering data since 1999 on Resident Space Objects in or near Geostationary Orbit as well as passing objects in eccentric orbits.

Since their successful orbital delivery, the four Galileo 15-18 satellites have been transitioned from an initial safe mode to nominal operations mode after going through a checkout. Over a period of weeks, the four satellites will be thoroughly checked, their navigation payloads will be powered up and the satellites will be phased into Plane C of the operational Galileo constellation.

Once the new additions enter their spots within the Galileo constellation, the European Commission can decide to press forward and begin offering initial operational services with a total of 18 operational satellites in the system. Another six are needed to achieve full operational services on a global & 24/7 basis. By 2020, Galileo will consist of 30 spacecraft with 24 in active service and two operational spares in each of the three orbital planes.