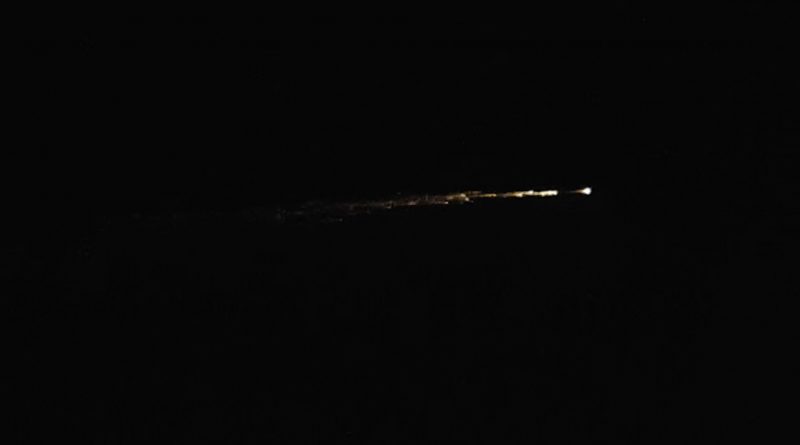 The re-entry of the upper stage of China’s Long March 7 rocket that recently launched the country’s first orbital logistics mission was captured by dozens of observers in the Uzbek Capital of Tashkent. The rocket stage had been in orbit for a month, slowly losing altitude before succumbing to drag and starting a fiery dive into the atmosphere, putting on a spectacular show in the night skies over Uzbekistan.

Dozens of ‘meteor sighting’ videos were uploaded to YouTube Thursday night, but the speed of the object and the visible fragmentation was consistent with a human-made object descending from orbit as opposed to a natural meteor that would move significantly faster.


Observers provided the timing of the fireball sighting as 12:25 a.m. local time (19:25 UTC) which lines up with the ground track of the 2017-21B Long March 7 rocket body and also matches re-entry predictions issued by the Joint Space Operations Center that watches objects that are close to orbital decay.

Long March 7 made its debut back in June 2016 on a shakedown mission with a scaled prototype of China’s future crew vehicle, clearing the launch vehicle to make its second flight with the Tianzhou-1 cargo spacecraft on a demonstration of China’s orbital resupply architecture. Liftoff from the Wenchang Satellite Launch Center occurred at 11:41 UTC on April 20 and Tianzhou-1 enjoyed a smooth ten-minute ride into an orbit of 200 by 383 Kilometers from where the 12,910-Kilogram spacecraft used its own engines to link up with the Tiangong-2 space laboratory two days after launch.

The second stage of the Long March 7 rocket completed passivation maneuvers and remained in the injection orbit, headed for a fairly quick orbital decay given its low perigee altitude and large drag surface.

The second stage of the CZ-7 measures approximately 11.5 meters in length, is 3.35 meters in diameter and has a dry mass of around six metric tons. It is powered by a cluster of four YF-115 engines each generating 180 Kilonewtons of thrust to lift payloads into orbit.

Rocket stages of this size can put on a spectacular show when re-entering in darkness, breaking up in a bright fireball that can remain visible for up to a minute.

Over the course of its four weeks in orbit, the Long March 7 rocket body was subjected to drag resulting from atoms and molecules in the upper reaches of Earth’s atmosphere, causing the rocket body to slow down and gradually drop into more dense layers of the atmosphere where the speed of orbital decay accelerated ahead of a fiery dive..

2017-21B was traveling from south-west to north-east, flying over the Caspian Sea and crossing over Turkmenistan, Uzbekistan and south Kazakhstan. As plasma built up around the stage, starting around 104 Kilometers in altitude, it became visible as a small dot moving across the sky. Hitting the dense layers of the atmosphere, heat started building up on the stage and drag at the high entry speed of 7.8 Kilometers per second quickly built up to a destructive force, causing the rocket body to break apart.

The disintegration of the stage and the individual components, each in a blaze of fire, can be seen in videos published on the Internet. One distinctly brighter object can be seen leading the trail of disintegrating pieces, likely the heavy engine section that represents most of the rocket stage’s mass and is expected to survive longer than the thin aluminum tank structures.


Given the extremely high speed of the object at Entry Interface, air in front of the vehicle is compressed, creating a shock wave layer in which molecules are separated into ions and temperatures rise to the extreme.

The mechanical deceleration experienced during re-entry can be up to 20Gs, further crushing the structural components and causing the break-up of the spacecraft. Temperatures reached during re-entry can melt most metal types and most of the fragments created on entry fully burn up, leaving a cloud of dust in the upper atmosphere. Particularly robust pieces such as spherical pressurant tanks and engine components are known to be able to survive entry and reach the ground.

Dense components that survive re-entry usually impact 800 to 1,300 Kilometers downrange from the Orbital Decay Point – atmospheric properties such as crosswinds play a significant role during atmospheric descent. Based on the location of re-entry observations, any surviving debris would have impacted in northern Kyrgyzstan and southern Kazakhstan, possibly even into China.