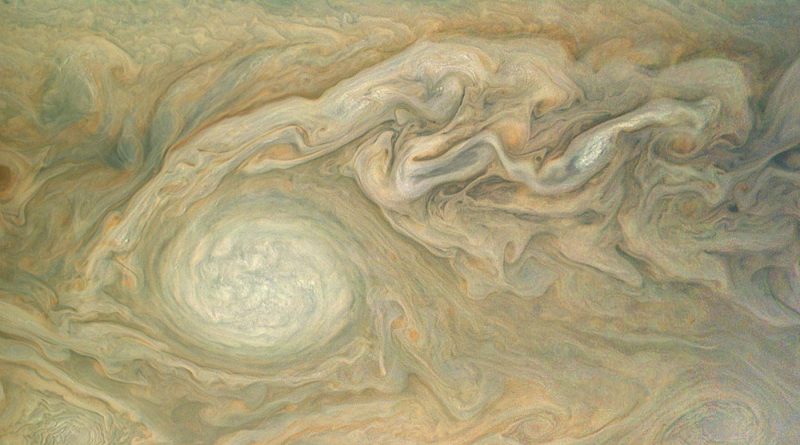 In an update, NASA said the flyby was successful and all of Juno’s science instruments and JunoCam were operating during the encounter that took the spinning spacecraft from north to south above the planet’s dense atmosphere before drifting away from Jupiter in the craft’s highly elliptical orbit.

Juno reached a perijove distance of 3,500 Kilometers at 6 UTC on May 19, zipping past the planet at a peak speed of 200,000 Kilometers per hour. At the moment of closest approach, Juno had traveled 102 million Kilometers in orbit around Jupiter following a 2.6-billion Kilometer odyssey through the solar system prior to the craft’s arrival at Jupiter on July 4, 2016. The mission was changed earlier this year, keeping the spacecraft in a highly elliptical orbit taking 53 days for one lap around the planet instead of spiraling down into a two-week science orbit due to concerns associated with Juno’s main propulsion system.


Friday’s flyby was Juno’s seventh close encounter with Jupiter – the first was dedicated to a rocket-powered braking maneuver to allow Juno to be captured in orbit and another science opportunity was missed in October when the solar-powered spacecraft unexpectedly went into safe mode due to a software glitch. A total of 11 science orbits will occur during Juno’s primary mission through February 2018 out of 32 laps originally planned with the shorter science orbit. However, NASA could extend the mission by another three years to give Juno more science orbits – provided the spacecraft can manage to stay alive in Jupiter’s intense radiation environment.


So far, Juno has shown that Jupiter’s magnetic field is more complicated than originally believed based on data gathered from previous missions. Data analyzed to date also shows Jupiter’s colorful belts and zones extend into the deep layers of the atmosphere characterized by crushing pressures and extreme temperatures. Juno data also indicates that Jupiter moon Io contributes to the planet’s powerful auroras that may be caused by material lifted from Io which then interacts with Jupiter’s magnetic field.

Barring any radiation-induced upsets, Juno could be looking at a fairly long life in its elliptical Jovian orbit with plenty of fuel available to power the craft’s low-thrust engines used for attitude control and small orbital trims executed regularly to target the desired longitude of each science pass that takes the craft from north-to-south, skimming just 4,000 Kilometers over Jupiter’s dense clouds. Additional maneuvering will be required beginning in June 2019 to gradually modify Juno’s orbit to avoid an eclipse season.