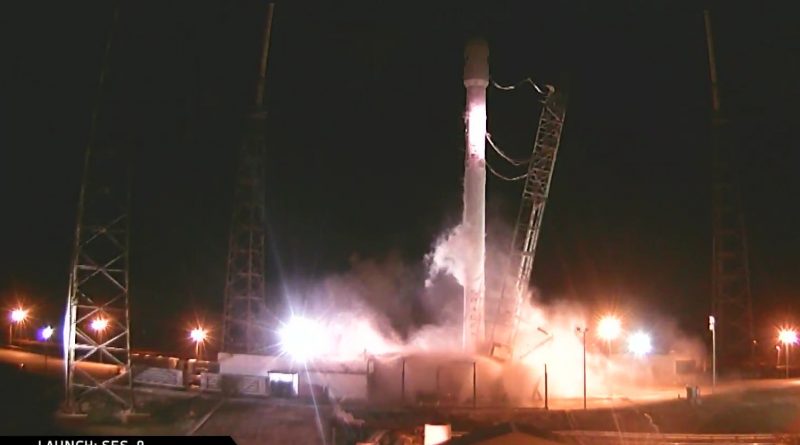 SpaceX went through a dramatic countdown Sunday night that ended with an abort after the ignition of the Falcon 9 main engines with just around one second before the 70-meter tall rocket would have been committed to flight. A new launch date remains to be announced, pending the completion analysis of the aborted ignition.

SpaceX was forced to delay the long-awaited launch of the SES-9 communications satellite on back-to-back opportunities on Wednesday and Thursday because of issues with the sub-cooled Liquid Oxygen used by the improved Falcon 9 FT vehicle. Because the launch of the heavy SES-9 satellite demands almost the entire performance of the Falcon 9 rocket, particular focus is on achieving the proper mass of propellants inside the tanks at liftoff which is directly dependent on the temperature of the sub-cooled LOX and the chilled Rocket Propellant-1.


LOX temperatures were a concern on Wednesday, causing SpaceX to defer to Thursday when the countdown ran all the way to T-1 minute and 41 seconds at which point a hold was called because the rapid LOX loading sequence had not finished in time to permit a liftoff. Finishing the tanking sequence very close to liftoff prevents the LOX from warming up and is particularly important for a performance-limited mission.

With a tweaked propellant loading sequence, Falcon 9 again headed into its rapid tanking operation Sunday night after going through a very smooth turnaround, repeating the necessary checks that confirmed the launcher and spacecraft were in readiness for the mission. Propellant loading closed out in time, around two minutes ahead of T-0, and Falcon 9 stood ready for liftoff with over 500 metric tons of propellants in its tanks.

At T-1 minute and 33 seconds, clocks were held when the Eastern Range called a No-Go condition due to what is known as a ‘Fouled Range’ – a violation within the safety box around the launch pad and the downrange flight path over the Ocean. This area is cleared over two hours prior to launch and notices to marine and aeronautical traffic are posted to inform of the restricted zones. However, a boat entered the area just minutes prior to the opening of the launch window and forced Falcon 9 to remain on its pad.

The SpaceX Launch Team quickly safed the vehicle and recycled the countdown to its T-10-minute hold point to wait for the boat to clear the area as helicopters headed toward the vessel. The prolonged hold meant that Liquid Oxygen was slowly warming up inside the vehicle’s tanks, a condition that was not accepted for the past launch attempt, but SpaceX decided to keep the oxidizer on board and wait for one more attempt.

Calculations showed the latest possible T-0 to be 34 minutes after the opening of the window – 0:21 UTC on Monday –  likely concerning the appropriate propellant mass onboard the vehicle. Although the range had not been cleared, SpaceX pressed into the Terminal Countdown to protect this final attempt and Falcon 9 checked off its final preparatory steps leading up to ignition. A clear range was announced at T-90 seconds and Falcon’s computers assumed control of the countdown for the ignition of the nine Merlin 1D engines.

Falcon 9 soared to life and the characteristic green flames of Falcon’s igniter mixture erupted from the engines as turbopumps spun up and combustion was triggered within the nine engine chambers. A cutoff of the engines was triggered by the onboard computers when clocks were about to hit zero, based on thousands of parameters checked in real time to ensure all engines reach operational conditions before Falcon 9 is committed to flight.

The engine shutdown was caused by a Low-Thrust Alarm, according to SpaceX CEO Elon Musk who added that the cause for cutoff was the increase in LOX temperature during the hold as well as helium bubbles ingested by the engines, likely as the result of the warming LOX. Teams went through a quick review of data before deciding to scrub the launch after going through a rather eventful countdown.

Visible after the shutdown of the Merlin engines was a persistent fire at the base of the Falcon 9 rocket, present for at least one minute after the abort with varying intensity, possibly due to residual fuel or igniter fluid.

No new launch date has been announced immediately after the scrub as time will be needed to analyze data gathered during the brief ignition of the engines and time is also required to re-chill the Liquid Oxygen ahead of the next launch attempt.

In case the problem was limited to a rise in LOX temp as a result of the hold, the work during turnaround could be expected to be relatively straightforward, but SpaceX will review all areas to ensure Falcon 9 is healthy ahead of another launch attempt. The Eastern Range reported after Sunday night’s operation that a new launch date would not be evaluated for at least another 48 hours.