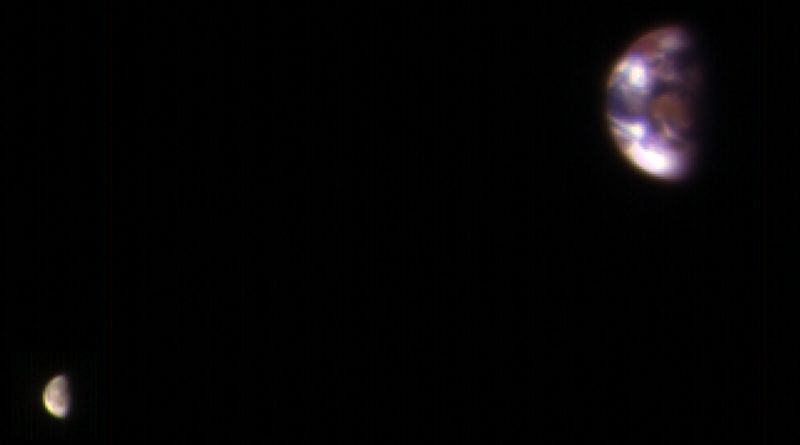 NASA released a spectacular image this week showing the Earth and Moon from a unique perspective – the orbit of Mars. The photo – assembled from two separate exposures of Earth and Moon – was taken back in November by NASA’s Mars Reconnaissance Orbiter that has been the agency’s sharpest eye in orbit around the red planet since 2006.

The composite image of the Earth-Moon System, as seen from Mars, combines the best Earth image and the best Moon image from four sets acquired by MRO’s High Resolution Imaging Science Experiment (HiRISE). Although the images are primarily used to calibrate the sharp-eyed imaging instrument, they provide an incredible look at our home in space, seen from a truly unique perspective.

Separate exposures were needed because the Moon is much darker than Earth and would barely show up in an image exposed for Earth’s brightness. The combined view retains the correct sizes of Earth & Moon as well as the positions of the two bodies relative to one another as seen from the orbiting spacecraft.


HiRISE collects images in three wavelength bands – blue/green, red and infrared. From these bands, approximate color images can be created, showing vegetation in a reddish color. The brown-red feature in the center of Earth is Australia and Southeast Asia is visible near the top. Antarctica is the bright area at bottom-left and other bright zones are clouds.

Images like this help calibrate HiRISE image data collected at Mars since the spectral properties of the near side of the Moon are very well known. At the time the calibration sequence was collected, Mars was approximately 205 Million Kilometers from Earth.

The Lockheed Martin-built Mars Reconnaissance Orbiter launched back in August 2005 and has been exploring Mars since November 2006 with a suite of six instruments – cameras, spectrometers and radar to deliver a comprehensive look at the Martian landscape, composition and weather. Additionally, MRO is a prime relay point for NASA’s Mars Rovers, picking up data from the Mars Exploration Rovers and Curiosity and sending it to Earth via its powerful high-gain antenna – increasing the amount of data that can be transferred to Earth by orders of magnitude.

MRO’s HiRISE instrument hosts an 0.5-meter reflecting telescope, capable of imaging the Martian surface at a resolution of 0.3 meters – comparable with the resolution of state of the art Earth-imaging satellites.

HiRISE has been instrumental in a number of discoveries by MRO. In recent years, the Mars Reconnaissance Orbiter found signs that liquid water still exists periodically on Mars. HiRISE images show downhill flows referred as recurring slope lineae that often appear as darker streaks on steep hills. Additional data delivered by the Compact Reconnaissance Imaging Spectrometer for Mars showed the presence of hydrated salts within the downhill flows.