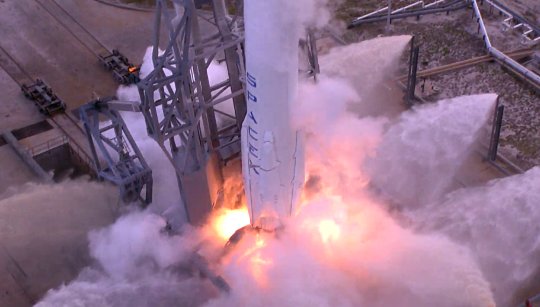 
Initial work at the launch pad in the days after the accident were focused on collecting debris related to Falcon 9 to aid the investigation into what happened while initial damage surveys were also performed on the grounds of SLC-40. Severe damage was noted to the Transporter-Erector-Launcher device that had faced the brunt of the conflagration, the launch mount onto which the 500-metric-ton vehicle collapsed, cross-country propellant and pressurant feed lines, the pad’s electrical and data infrastructure and the flame trench in which the Kerosene-fueled fire burned for several hours after the event. The Horizontal Integration Facility and the pad’s lightning towers did not receive any significant damage and the pad’s foundation was also found in good condition.


The effort to re-build Space Launch Complex 40 started in earnest in February after LC-39A had supported its first Static Fire Campaign for the Dragon SpX-10 mission.


SpaceX conducted its first re-use mission in March after completing detailed inspections and component lifetime testing on returned Falcon 9 first stages. Another two re-flight missions have followed since and SpaceX provided NASA with extensive documentation for engineering reviews into using previously flown boosters for Commercial Resupply Services Missions. NASA determined that using first stages with one prior Low Earth Orbit mission will add no risk to the overall success of the CRS mission and provided SpaceX the green light to fly a refurbished booster on the SpX-13 mission.