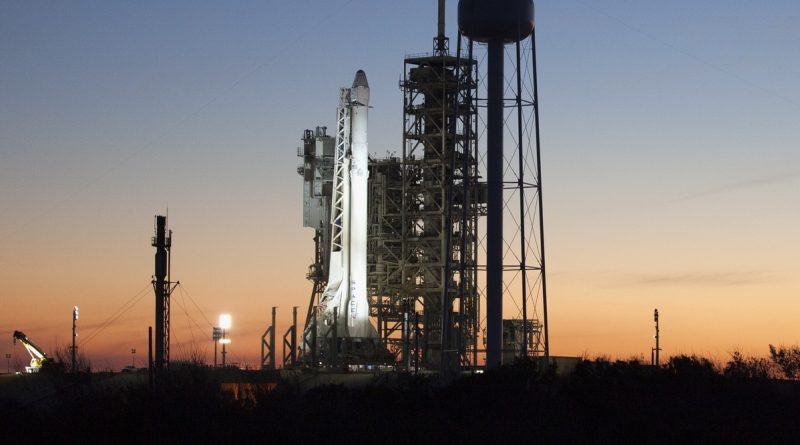 SpaceX and NASA are GO for Saturday’s planned launch of a Falcon 9 rocket with the Dragon cargo spacecraft set for its tenth operational mission to the International Space Station, carrying 2,500 Kilograms of cargo to the orbiting laboratory. Engineers spent Friday loading final cargo items into the Dragon and closing out a minor issue on the rocket’s second stage to permit Falcon 9 to head into a lengthy countdown in the early hours on Saturday.

Falcon 9 is targeting liftoff at 15:01 UTC, the center of a brief window that is treated as an instantaneous opportunity given the rocket’s complex countdown timeline. Thundering off, the two-stage rocket will be in action for ten minutes to lift the Dragon cargo vessel into orbit and the Falcon 9 first stage will attempt its third landing at Cape Canaveral’s Landing Zone 1, the first daytime return to Florida’s Space Coast.

Saturday’s launch marks the first rocket launch from Kennedy Space Center’s Launch Complex 39A over five years after it supported the last mission of the Space Shuttle in July 2011. LC-39A looks back at a long history in Human Space Flight operations dating back to 1962 when construction of the complex started for NASA’s giant Saturn V rocket. All Apollo missions to the surface of the Moon launched from LC-39A before the pad took its new role as a launch pad for the majority of the Shuttle’s 135 missions.


Saturday’s mission is the first uncrewed rocket launch from LC-39A since 1973 when the complex hosted the launch of Skylab atop a modified Saturn V rocket, marking the deployment of America’s first Space Station. SpaceX hopes to return LC-39A to human spaceflight operations soon with the crewed version of the company’s Dragon spacecraft currently aiming for an uncrewed test flight toward the end of 2017 and a crewed mission in the first half of 2018.

Gearing up for the first Falcon 9 launch from LC-39A, SpaceX engineers worked tirelessly for weeks to activate the launch pad after the company’s other Cape launch site, SLC-40 a few Kilometers to the south, suffered serious damage when Falcon 9 exploded during the countdown to a routine engine test – taking the pad out of commission for months. Falcon’s KSC debut had to be pushed from late January to a mid-February target as teams finished the last tests at Pad 39A, culminating in the Static Fire Test of Falcon 9 last Sunday.

With LC-39A up and running, construction crews plan to move down to SLC-40 in the coming weeks to begin the process of repairing that launch pad to give SpaceX two East Coast launch sites to help deal with a packed manifest of missions, scheduled to fly every two to three weeks for the rest of the year.

Following a successful Static Fire that provided an end-to-end exercise for the rocket and its all-new fueling system at LC-39A, Falcon 9 returned to its Horizontal Integration Facility for the installation of the Dragon spacecraft. The fully assembled vehicle rolled back to the launch pad on Thursday for a dress rehearsal before the 65-meter tall rocket returned to a horizontal position on Friday for a busy late-cargo loading shift.

Accessing the Dragon through a Mobile White Room, NASA and SpaceX crews loaded around 500 Kilograms of time-critical experiments into the Dragon among which were bacteria and stem cell cultures as well as 20 mice that will ride the Dragon into orbit for a study of bone tissue regeneration in microgravity. All in all, Dragon SpX-10 is carrying 2,490 Kilograms of hardware to the Space Station including two external payloads to monitor Earth’s atmosphere and test out a series of cutting-edge technologies in the space environment.

While late cargo loading was in progress, engineers were also busy on the rocket’s second stage where a small Helium leak had been discovered. Officials said the leak did not pose a risk to the rocket’s primary system as it involved the helium-spin start system of the second stage engine that will only come into play when re-starting the engine in space to deorbit the second stage after Dragon was sent on its way.

Nevertheless, engineers were seen working in the second stage area to resolve the issue and SpaceX CEO Elon Musk Tweeted that an additional hold-point was inserted into the countdown to stop the clock at T-60 seconds should the second stage spin start system fail a pressure decay verification in the final minutes of Saturday’s countdown.

In addition to the possibility of a technical issue, SpaceX will also be looking at the weather. Chances of favorable conditions during Saturday’s launch opportunity improved from even odds earlier in the week to a 70% probability of cooperative weather, however, there is still a small potential for violations of the thick cloud rule.

Another item to watch will be sporty upper level winds forecast to top out at 110 knots. Upper level winds are not characterized as a range weather constraint and show up in launch vehicle specific commit criteria assessed by SpaceX engineering teams to ensure the rocket can safely ascend.

Saturday’s countdown is beginning bright and early at Florida’s Space Coast as Falcon 9 is powered up to undergo a multi-hour testing campaign to ensure all onboard systems are up and running. Although the day’s window is five minutes in duration, SpaceX is treating it more or less as an instantaneous slot with T-0 aimed for 15:01:32 UTC which is subject to change by a second or two when updated tracking data comes in from the Space Station.

Setting up for the precise T-0 time, SpaceX launch controllers will be polled for a Go/No Go for liftoff at T-1 hour and 18 minutes, setting the stage for the initiation of the automated tanking sequence eight minutes later.

This mission, like Falcon’s return to flight in January, uses a more conservative sequence to load the two-stage rocket with Helium pressurization gas and Liquid Oxygen & Kerosene propellants in a stopgap measure that prevents the conditions that caused the September 1st explosion from occurring, though at the cost of some of the rocket’s performance. Ultimately, SpaceX will implement hardware changes that will enable Falcon 9 to go back to its more rapid propellant loading sequence for maximum performance.

Dragon will make its transition to internal power before the Falcon 9 begins a fast-paced sequence in the last seven countdown minutes to chill down its nine Merlin 1D main engines, switch to battery power and complete a last set of pre-programmed checks. A final GO from the Launch Director and Eastern Range comes at T-90 seconds before Falcon 9 assumes full control of the countdown at T-1 minute.

The Strongback structure at LC-39A will open its support cradles in advance of liftoff, but remain raised against the rocket’s body until the moment the hold-down system lets go of the launcher, triggering a rapid retract of the Strongback.

Falcon 9 will come to life three seconds before launch, soaring to a thrust of 694 metric ton force which in fact makes it the least-powerful rocket to lift off from LC-39A, following in the footsteps of the Saturn V that had five times the launch thrust of Falcon 9 and the Space Shuttle that also outperformed Falcon 9 out of the gate.

Rising from its launch mount, Falcon 9 will quickly clear the 106-meter tall tower and begin its pitch and roll maneuver to fly to the north east, set for nine minutes of powered flight aiming for the Space Station’s orbital plane. Powering away from the Cape, Falcon 9 will push through the sound barrier just after T+1-minute followed seconds later by Maximum Dynamic Pressure for which the rocket will momentarily throttle back its engines.

The first stage will be in charge of powered flight for two minutes and 21 seconds, tasked with accelerating the rocket to a speed of over 1.5 Kilometers per second when handing off to the second stage. Pneumatic pushers will separate the stages three seconds after MECO as the two part ways with the booster set for a propulsive return to the Space Coast and the second stage headed toward orbit, firing up its 95,000 Kilogram-force MVac engine at T+2:32.

With the second stage on its way, the booster will waste no time and immediately swing around to an engines-first position to re-start three of its Merlins two minutes and 41 seconds into the flight for a full boost back maneuver of around 50 seconds – reversing its travel direction to aim for Landing Zone-1, located 15 Kilometers from Falcon’s KSC launch pad.

Flying outside the atmosphere, the first stage will employ its cold gas thruster system to maneuver into the proper orientation for re-entry. The 46-meter tall booster will hit the brakes by making a 20-second re-entry burn ahead of a brief 45-second unpowered flight through the atmosphere, steering toward the landing site with four actuated grid fins.

Ignition of the rocket’s center engine occurs just over thirty seconds before the planned touchdown at LZ-1, set for some heavy throttling to gently set the booster down on its four fold-out landing legs just over eight minutes after launch. SpaceX continues to class the landing attempt as an experimental secondary mission objective, though the success rate achieved in landing the first stage on land and at sea bodes well for the company’s re-use aspirations.

While the booster attempts its first daytime landing at the Space Coast, the second stage will have almost traversed the Atlantic, preparing to head into Terminal Guidance Mode to hit its mark perfectly, likely aiming for Dragon’s typical insertion orbit of 200 by 360 Kilometers. Shutdown on the MVac is expected nine minutes and five seconds after liftoff with separation of the Dragon exactly one minute later.

Drifting off on its two-day link-up with ISS, Dragon will begin breathing fire to stabilize its attitude before dropping its solar array fairings and deploying the two power-generating arrays at the T+11-minute mark. The critical opening of the GNC Bay Door occurs two hours and 20 minutes into the flight to reveal Dragon’s navigation sensors and grapple fixture before the spacecraft begins a series of orbit-raising maneuvers on Saturday and Sunday to set the stage for rendezvous.

Dragon will arrive at the Station’s doorstep on Monday, carefully maneuvering up from a position directly underneath ISS to reach the grasping distance of the Space Station’s 18-meter long robotic arm. ESA Astronaut Thomas Pesquet will be at the controls of Canadarm2, backed up by ISS Expedition 50 commander Shane Kimbrough, to robotically capture the Dragon at around 14 UTC. Robotic controllers in Houston will then take over for the berthing of the craft to the Station’s Harmony module, enabling the crew to open the hatch later on Monday or first thing on Tuesday to quickly extract the various time-critical investigations delivered by the Dragon.

Dragon is booked for a four-week stay to facilitate internal cargo transfers and experiment operations while, on the exterior of ISS, robotic operations will be full swing to move the external payloads to the Station and bolt disposal items into Dragon’s Trunk Section.