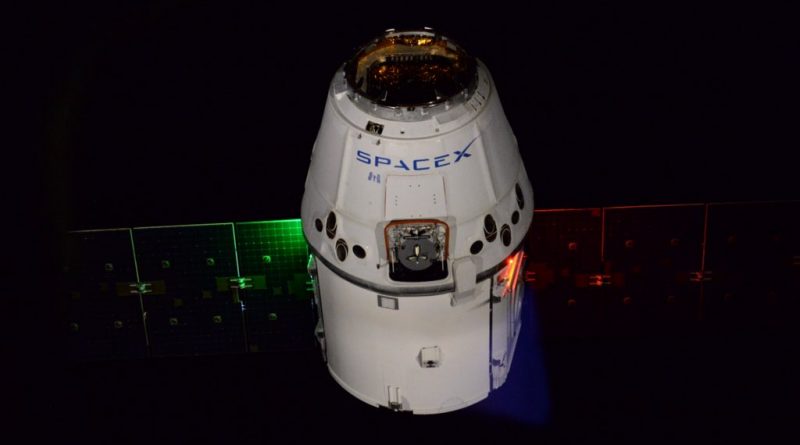 The SpaceX Dragon is working towards a Monday homecoming after a very busy cargo-delivery mission to the International Space Station that brought plenty of experiments for the crew to perform as well as three high-profile external payloads, two of which have taken residence on the Station while one was jettisoned overboard.

Dragon’s parachute-assisted splashdown landing in the Pacific Ocean was pushed from an original target of Sunday due to unfavorable sea states in the offshore landing area. The one-day delay provides time for weather to improve and the natural shift of the Space Station’s orbit also moves the landing zone closer to shore, aiming for a box 420 Kilometers south west of the Californian coast line.


Per the revised plan, Dragon will depart the Space Station at 6:41 UTC Monday morning, embarking on several hours of free flight before firing up its Draco thrusters for a ten-minute braking maneuver to drop out of orbit, aiming for re-entry over the Pacific to set up for what is hoped to be another pin-point landing by the spacecraft, enabling a fast recovery and return to shore. The Dragon is loaded with close to two metric tons of science samples and performed experiments that scientists are eager to get their hands on as soon as possible after splashdown.

The eleventh regular Dragon mission started back on June 3 with a successful launch atop a Falcon 9 rocket, marking the 100th liftoff from Kennedy’s Launch Complex 39A, the former on-ramp to the Moon and launch site for the majority of Shuttle missions. Dragon SpX-11 is the first re-use mission for the SpaceX Dragon, employing the C106 spacecraft that visited ISS back in September 2014 on the SpX-4 mission and underwent refurbishment after returning, continuing SpaceX’s drive to implement re-usability across its rocket and spacecraft fleet.

The refurbishment process between Dragon’s two missions included the replacement of a number of components like the heat shield, some external panels, avionics boxes and other equipment for which lifetime concerns existed. The pressure vessel, thrusters and general majority of systems remained unchanged between the two missions and SpX-11 acted as a validation for future re-use missions that will enable SpaceX to close down Dragon 1 production and focus on the Dragon 2 vehicle that will take over cargo missions after the Commercial Resupply Services 1 contract round and also fly in a crewed configuration as part of NASA’s Commercial Crew Program.


Loaded with 2,708 Kilograms of cargo, Dragon arrived in the vicinity of the Space Station two days after launch, approaching ISS from directly below for a robotic capture by the Station’s Canadarm2. Dragon was bolted in place on the Harmony module later that day and was opened for business by the crew to access 1,665kg of pressurized cargo delivered by the Dragon.

It was a busy month for Peggy Whitson and Jack Fischer who are currently holding up the fort aboard the U.S. Segment of the Station. They had plenty of cargo to move over to ISS and their plan included dozens of experiments that rode uphill on the Dragon and were planned to return aboard the same spacecraft after being performed in orbit.

Within two days of Dragon’s arrival, the crew transferred 40 mice to their residence on ISS to participate in the fifth Rodent Research experiment which studies a novel drug that promises to halt or even reverse bone loss encountered by astronauts in space and patients with Osteoporosis on Earth. Twenty of the mice were loaded back into Dragon for return to Earth, the first live mice to return under Rodent Research to check their post-flight progress. Their former companions are not as lucky and get to live in orbit for another five weeks before being euthanized for future return to Earth.

The crew also set up Fruit Fly Labs on ISS holding thousands of flies that are part of an experiment using the flies as model organisms to examine the effect of microgravity on human heart function. Fischer and Whitson also activated crystallization studies, student payloads, stem cell research and DNA experiments.

Operations were equally busy outside the International Space Station with the Station Robots, the 18-meter long Canadarm2 and the two-armed Dextre, in action for the better part of the four-week stay to deal with the three external payloads on the Dragon Spacecraft.

First to be pulled out of the Dragon Trunk Section was MUSES, the Multi-User System for Earth Sensing – a high-fidelity articulated bench that can hold four Earth-pointed instruments for easy ‘plug-and-play’ installation & removal while providing payloads with electrical connectivity, data handling and precise Earth pointing. Developed by Teledyne Brown, MUSES was installed June 6 through June 10 on Express Logistics Carrier 4, establishing a new prime Earth-watching facility on ISS for high-resolution imagers, spectrometers, magnetic sensors and various other payloads.


Next up was NICER – the Neutron-Star Interior Composition Explorer, a high-profile X-ray observatory that will collect precise spectral and timing data on ultra-dense Neutron Stars to reveal their internal composition and uncover mechanisms for dynamic phenomena like ultra-energetic particle acceleration at Neutron Stars.

NICER took its position on ELC4 Site 2 on June 14 and was deployed on June 16 after overcoming initial trouble with its launch locks. After range of motion checks with its large Optical Bench, NICER headed into initial calibration measurements that will continue into mid-July before the instrument begins its science phase of at least two years.

The last item to be moved out of Dragon’s Trunk was ROSA – the Roll Out Solar Array, a technology demonstration of a new type of deployable solar array that could be the answer for the power-hungry satellites of the future.

Beginning its pathfinder mission, ROSA was unrolled on June 18 for a weeklong checkout looking at structural dynamics, power characteristics and thermal behavior to retire risks for future satellite missions. When ROSA failed to lock back in its retracted position, a prepared Plan B went into motion and the deployed array was jettisoned from its attachment mechanism on June 26 to undergo a natural orbital decay over a period of months; the Active FRAM was placed back into the Dragon trunk and will be disposed of on Monday via re-entry.

With Dragon’s stay on ISS winding down, the crew was in charge of final cargo loading this week with an estimated 1,860kg of hardware returning aboard the Dragon, including one Animal Transporter with 20 lucky mice, the Fruit Fly Lab and four Polar freezers with various experiments including stem cell research. Dragon missions are a welcome opportunity to empty the Station’s laboratory freezers that hold everything from crew members’ bodily fluids, rodent organs to plant parts. Dragon will be carrying hundreds of tubes of blood, urine and saliva from the crew to support various studies looking into how the body responds to prolonged exposure to space.

Dragon was buttoned up on Sunday with the crew closing the hatch to the spacecraft and going through the usual process to outfit the cavity between ISS and Dragon by removing power/data jumpers and installing drive controllers for the berthing mechanism bolts. Leak checks were completed once the ISS hatch was shut to clear the way for an overnight unberthing for an early morning release.

Four sets of four bolts will be driven followed by the opening of four capture latches to free the Dragon, giving Canadarm-2 full control of the vehicle for a ground-controlled maneuver to the release position. Jack Fischer and Peggy Whitson will take over from ROBO controllers after an early wake up time to support the release of the spacecraft, scheduled for 6:41 UTC with snares releasing the craft’s grapple fixture and Canadarm2 retreating to a safe distance.

Recovering from Free Drift, the Dragon will make an initial departure burn three minutes after release to depart ISS along the R-Bar or radial vector. Another short pulse of the Draco thrusters comes 90 seconds after the first maneuver to accelerate Dragon’s departure along the R-Bar.

Once outside the Keep Out Sphere, Dragon will make its third and largest departure maneuver to depart the Approach Ellipsoid, pulling out in front of ISS to enter a five-hour free flight toward a rocket-powered braking maneuver to drop out of orbit.

One of the critical events of the Free Flight is the closure of the GNC Bay Door to protect the navigation sensors inside from the harsh re-entry environment. Firing the Draco thrusters for around ten minutes, Dragon will be slowed by around 100 meters per second, placing it on a path toward the dense atmosphere for a fiery re-entry.

Splashdown is expected 420 Kilometers south-west of the Californian Coast where recovery forces will be awaiting the arrival of the vehicle. In previous cases, Dragon’s landing was very close to the bulls-eye target, allowing teams on the recovery ships to track a large portion of the vehicle’s descent under its three main parachutes.