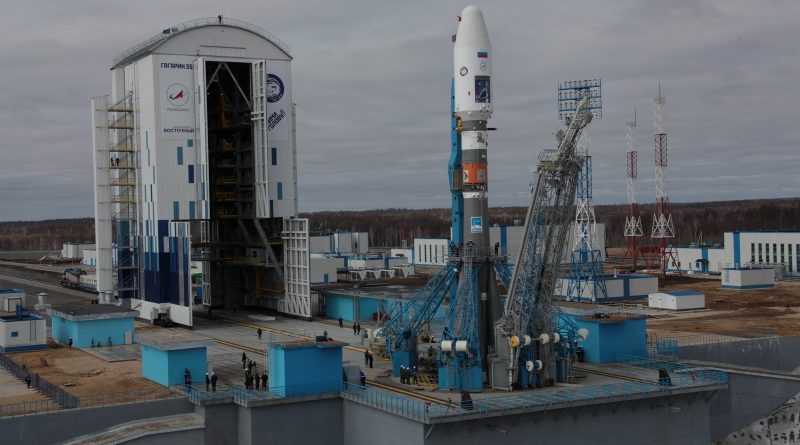 The inaugural Soyuz launch from Russia’s Vostochny Cosmodrome was delayed on Wednesday in a last-minute countdown abort due to a technical issue occurring during the automatic countdown sequence. Media reports issued immediately after the launch scrub noted safing of the rocket had begun and a new launch attempt could be made on Thursday.

Roscosmos later confirmed the countdown abort and said the launch would be rescheduled to Thursday at 2:01 UTC.

Soyuz 2-1A, set to deliver a trio of satellites to orbit, headed into a modified countdown in the evening hours on Tuesday after the Russian State Commission provided clearance for the 46-meter tall rocket to be loaded with propellants. Tanking picked up at 18:30 UTC, around four hours earlier than for operational Soyuz missions to add a cushion in case of any issues arising during the fueling sequence – the first time the launch pad’s propellant handling systems were in action for an actual launch countdown.

According to an update issued by Roscosmos at 23:36 UTC, propellant loading had been completed as planned and permission was given to press into the business end of the launch countdown. The Mobile Service Gantry retracted from the rocket and the launch complex was cleared in the last half hour of the countdown operation.

The countdown transitioned to its critical automatic sequence at T-6 minutes to put the Soyuz launch vehicle through the final steps, placing it in an autonomous launch configuration. An abort was triggered 1.5 minutes prior to the planned liftoff due to an issue arising during the tank pressurization sequence.

Roscosmos decided against providing a live launch broadcast from Vostochny after initially planning to deliver live coverage from one hour to T-0.

Live video of high-profile space launches had been a sensitive matter since the inaugural launch of the Angara rocket in 2014 which had to be delayed while the world was watching – considered an embarrassment by Russia’s top officials. For a while, no live coverage was provided for any of Russia’s launches, but this restriction was soon lifted and regular broadcasts were available for all non-military launches of the past one and a half years.

With Vladimir Putin attending the inaugural launch from Vostochny, the likely reasoning behind the lack of coverage was avoiding a repetition of the Angara scenario since issues during the first launch of a new vehicle or the debut mission from a new launch site are a possibility.

A backup launch slot had been reserved for Thursday for the event of a one-day delay, however, the schedule for the next launch attempt still has to be determined once the issue that halted the countdown is fully understood.

The three satellites to be delivered to orbit by Soyuz – amounting to a payload mass of one metric ton – will serve a multitude of functions from technical demonstrations to research in diverse areas of science.