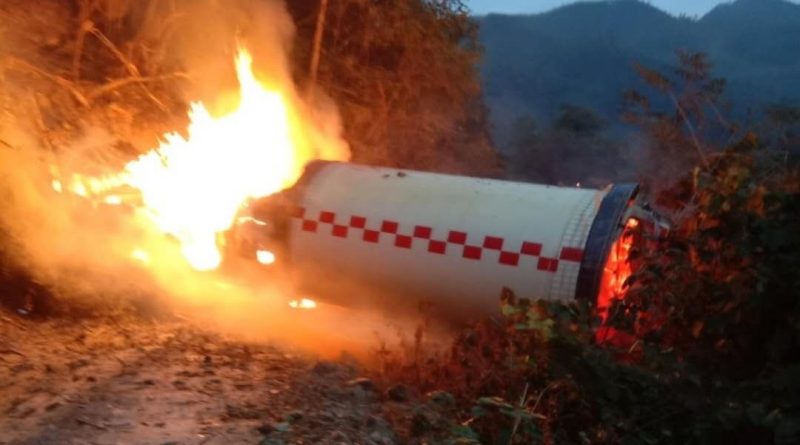 Chinese villagers captured remarkable footage just after sunrise on Friday showing a Long March 3B rocket booster falling out of the sky, crashing into a mountain and exploding into flames while releasing highly toxic propellants left in its tanks after helping send a pair of Beidou-3 navigation satellites on their way into orbit.

The Long March 3B rocket carrying the Beidou-3 MEO-7 and MEO-8 navigation satellites blasted off from the Xichang Satellite Launch Center at 23:18:04 UTC on Thursday, 7:18 a.m. local time, just around 45 minutes before sunrise at the launch site. Turning to the south east to head toward its orbital destination, the three-stage rocket flew into the sunrise and, at T+140 seconds, dropped its four liquid-fueled boosters after each burned some 41 metric tons of toxic self-igniting propellants.

After shedding the boosters, Long March 3B continued racing across the Chinese mainland before heading out over the Pacific Ocean on a lengthy climb of nearly four hours to deliver its twin payloads directly into a 21,500-Kilometer orbit. The successful conclusion of the launch was confirmed by Chinese space officials and independent orbital tracking data.

Video captured from Tiandeng County, Guanxi Province, around 700 Kilometers from the Xichang Satellite Launch Center, shows one of the rocket’s four boosters tumbling down from the sky and meeting its end when crashing into a mountain not far from town. Notices were given to villages and towns in the anticipated booster impact area and locals capturing the footage were apparently at the ready to witness the crashing rocket parts.

The sizeable explosion upon impact and the fairly large cloud of toxic Nitrogen Tetroxide oxidizer indicates the booster had considerable propellant residuals in its tanks. Nitrogen Tetroxide, as well as the Unsymmetrical Dimethylhydrazine used as fuel, are toxic substances and their release can be harmful to humans and the environment.


Close-up video of the burning wreckage shows a number of locals approaching the remains of the booster to very close distance, seemingly unaware of the potentially serious health hazards. No casualties were reported as a result of the impact of the boosters and other hardware associated with the Long March 3B rocket.

The Long March 3B boosters are quite sizeable objects, standing 16 meters tall and measuring 2.25 meters in diameter with a dry mass of 3,200 Kilograms, featuring a single DaFY-5-1 engine.

Evacuation orders are typically sent out one or two days in advance to villages expected to be right in the path of crashing rocket parts and are usually enforced by military personnel deployed to the impact sites to take locals to safe locations / shelters and deal with the recovery of wreckage. However, as seen through videos like those captured on Friday, these procedures are not always in effect or ignored by those who wish to remain in place at their home.

Photos of Chinese rocket and fairing debris are not uncommon since most Chinese rocket stages end up on land due to the use of inland launch sites. China’s three inland launch sites – Jiuquan, Taiyuan and Xichang – are the result of security concerns of the Cold War era when the country established its space launch bases and accepted the consequences of shedding rocket parts over inhabited areas.

However, China is working actively to address this issue for the future – stepping away from the use of hypergolic propellants for its new fleet of launch vehicles and opening the Wenchang Satellite Launch Center located on Hainan Island, offering access to a wide range of orbits without flying over land.

But for the foreseeable future, China will continue relying on its heritage rocket fleet and inland launch centers, meaning close calls with crashing rocket parts will not be a thing of the past anytime soon – especially with the overall number of launches from the inland space ports still expected to grow over the coming years.

The Long March 3 series is expected to fly more than a dozen times this year, including eight launches in support of the Beidou navigation system. All in all, China will be performing around 40 space launches in 2018 as the country’s space program expands from a primarily-military-motivated program with occasional human and science missions to a broad mix of military and civilian satellites, commercial space endeavors, robotic exploration of the solar system and the operation of a large orbital space station.