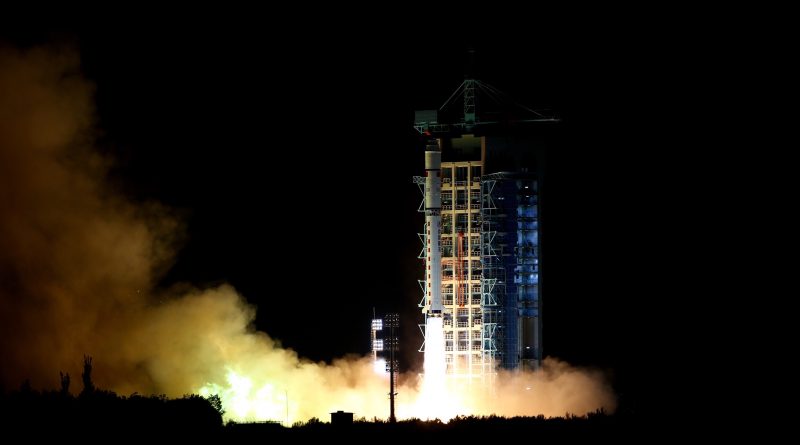 China’s first dedicated mission to monitor Carbon Dioxide in Earth’s atmosphere blasted off atop a Long March 2D rocket on Wednesday, embarking on a three-year mission designed to inform Chinese policy makers in the continued effort to reduce emissions of the greenhouse gas while also studying its role in global climate change.

TanSat’s trip into orbit occurred while a large portion of Northeastern China is under a Red Alert for dangerous levels of smog, affecting over two dozen major cities and over 200 million people. China’s cities have been afflicted by heavy smog numerous times this year, showcasing the importance of a change in direction in the country’s environmental policies with TanSat representing an important step on the path to reducing green house gas emissions.

Enshrouded in the protective fairing of its Long March 2D rocket, TanSat blasted off from the Jiuquan Satellite Launch Center in the Gobi Desert at 19:22 UTC on Wednesday, starting a ten-minute ascent into what was expected to be a 700-Kilometer Sun Synchronous Orbit. Riding shotgun on the CZ-2D launcher was a group of small multi-spectral Earth-imaging satellites.


TanSat – Tan being the Chinese word for Carbon – was born in 2011 when China’s Ministry of Science and Technology initiated a program to develop a small-satellite mission for the measurement of atmospheric carbon dioxide and deliver hard data needed by policy-makers for informed decisions furthering a sustainable development plan to reduce greenhouse gas emissions.

As a large, rapidly developing country, China is currently responsible for nearly a third of the world’s carbon dioxide emissions and is also in a leading position for other greenhouse gases such as methane. Due to its chemical structure, carbon dioxide is of particular importance to global warming – absorbing and emitting infrared radiation coming from the sun & trapping it in the atmosphere, a process which causes the surface and lower atmosphere to warm up while cooling the upper atmosphere.

The increase of atmospheric carbon dioxide concentration since the beginning of the industrial age has been identified as the major contributor to the rise in average global temperature. At present, atmospheric carbon dioxide has an average concentration of 402 parts per million by volume, versus 280ppm before the industrial revolution in the 19th century.

Most carbon dioxide from human activity is released by burning fossil fuels and deforestation with a total emission of around 29 billion tons per year – only half of which can be absorbed by Earth’s oceans and vegetation while the rest remains in the atmosphere.

Under the Paris Climate Agreement signed in December 2015 and ratified by 118 countries including China, measures were identified to hold the increase of global temperature to below 2° Celsius above pre-industrial levels. Per the agreement, China has pledged to reach a peak CO2 emission by 2030 and, over the next decade and a half, reduce CO2 emissions per unit GDP by up to 65%.

TanSat plays a vital role in China’s plan to reduce CO2 emissions, collecting spaceborne data on where carbon dioxide is released, tracking its variability over time, and pin-pointing where the gas is absorbed by natural processes.

Given the importance of CO2 in worldwide climate change, a number of missions have taken on the task of measuring carbon dioxide and studying its role in global warming, including the European Greenhouse Gases Observing Satellite and NASA’s Orbiting Carbon Observatory.

Scientific goals of the TanSat mission include understanding the global CO2 distribution, variations over time and its role in climate change phenomena. Additionally, the satellite offers the resolution needed to identify sources of human-made carbon dioxide from industry complexes, providing valuable data to aid China in energy conservation and verify whether emission reduction measures are taking effect.

The 620-Kilogram TanSat spacecraft hosts a pair of instruments to measure atmospheric carbon dioxide accurate to 4 parts per million and deliver a resolution of 1 by 2 Kilometers, detecting CO2 by the same absorption lines that make it a prime contributor to global warming. The mission’s main instrument is a high-resolution spectrometer tuned to the two near-infrared absorption bands of carbon dioxide plus a third channel covering the Oxygen A-Band.

TanSat’s spectrometer collects data across a 20-Kilometer wide ground swath with a global revisit time of 16 days which, in case of events of interest, can be reduced by the instrument’s off-nadir imaging function.

The second instrument on the TanSat spacecraft is a supporting Cloud and Aerosol Polarimetry Imager covering a wide ground swath of 400 Kilometers and collecting imagery at an 0.5-Kilometer resolution in five spectral bands from ultraviolet to near-infrared. This data will be used to correct measurements from the spectrometers which can be contaminated when clouds and suspended particles are in the air. TanSat’s combined instrument is hoped to deliver CO2 dry air mole fraction accurate to 1ppm once fully calibrated.

The TanSat project is managed by the Chinese Academy of Sciences with the high-fidelity instruments provided by the Changchun Institute of Optics, Fine Mechanics and Physics. International partners for the mission are the University of Leicester and the University of Edinburgh, UK.

China had also been in talks with NASA to discuss a possible collaboration between CO2-measuring missions despite the strict limitations in place for bilateral cooperation between China and the U.S.

Riding shotgun with TanSat atop the Long March 2D rocket was a group of three small satellites, including two 40-centimeter tall hyper-spectral Earth-Imaging satellites. The two satellites, referred to as Spark01星 & Spark02星, each host seven solar panels to deliver 130 Watts of power for the operation of a hyperspectral-imaging payload delivering image data across a 102-Kilometer swath. According to press reports, the two satellites will be operated in close coordination to broaden the ground coverage area to 200 Kilometers with data primarily used for environmental monitoring, agriculture and land-use assessments.

TanSat’s ride to space, the Long March 2D, is a two-stage rocket operated for a variety of Low Earth and Sun Synchronous Orbit mission in support of various Chinese satellite programs in the military and civilian sectors. Developed by the Shanghai Academy of Spaceflight Technology, Long March 2D premiered back in 1992 and, to date, has a perfect record of 30 missions (including TanSat).

For the first 170 seconds of Flight, the vehicle is powered by its first stage that is equipped with a YF-21C Engine that provides a thrust of 2,962 Kilonewtons. The stage is 27.91 meters long, 3.35 meters in diameter and filled with 183,200 Kilograms of Unsymmetrical Dimethylhydrazine and Nitrogen Tetroxide Propellants for a total weight of the first stage at launch of 192,700kg.

After first stage burnout and jettison, the second stage starts controlling the flight. The upper Stage is 10.9 meters in length and has the standard CZ-2D diameter weighing 45,600kg at liftoff. It also uses UDMH and NTO as propellants. A total of 39,550 Kilograms are aboard its tanks at blastoff. The second stage is powered by a YF-24C main engine providing 742 Kilonewtons of thrust and a 47.1-Kilonewton Vernier Thruster. Long March 2D can be outfitted with two different payload fairings to accommodate payloads of different sizes with fairing diameters of 2.9 and 3.35 meters.