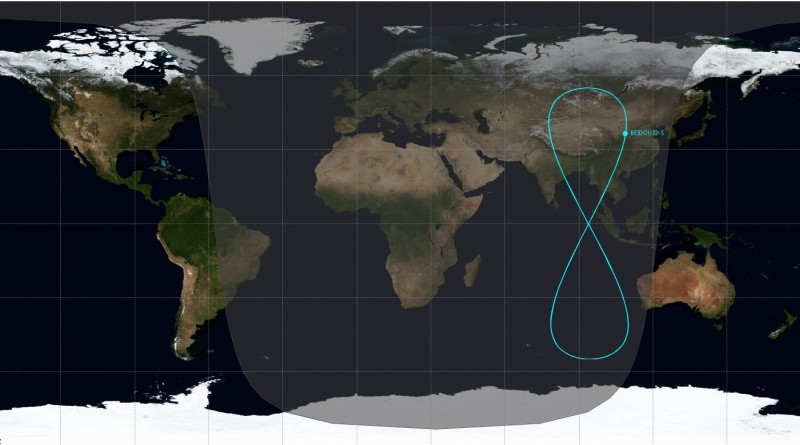 The Beidou-3 I2-S navigation satellite has entered Geosynchronous Orbit, according to tracking data that resumed for the satellite late in the week after an eight-day gap in data which is not uncommon for satellites when on the move.

The second of three Beidou-3 satellites to enter an inclined Geosynchronous Orbit blasted off on September 29 atop a Long March 3B rocket launching from the Xichang Satellite Launch Center. Performing a typical ascent mission, Long March 3B delivered the four-metric-ton satellite to a Geosynchronous Transfer Orbit of 192 by 35,826 Kilometers, already at the desired inclination of 55 degrees.

Unlike the first Beidou-3I satellite, this spacecraft did not rely on the YZ-1 upper stage for a direct insertion to a Geosynchronous Orbit which confirms reports that the Beidou-3 GEO/GSO satellites are built by two different manufacturers using different approaches to propulsion technology – one integrating a main propulsion system with the satellite, the other using an additional upper stage for orbital insertion.

The Beidou-3 I2 satellite spent the first days of its mission in its transfer orbit, likely undergoing initial checkouts and awaiting the proper position in its orbit to start the climb to Geosynchronous Orbit using its own propulsion system.
The latest tracking data shows the satellite in the following orbit:

The satellite will likely conduct more fine-tuning maneuvers in the coming weeks to adjust the orbit’s drift rate and settle in its operational orbit for checkouts ahead of entering service as part of the Beidou satellite navigation system.