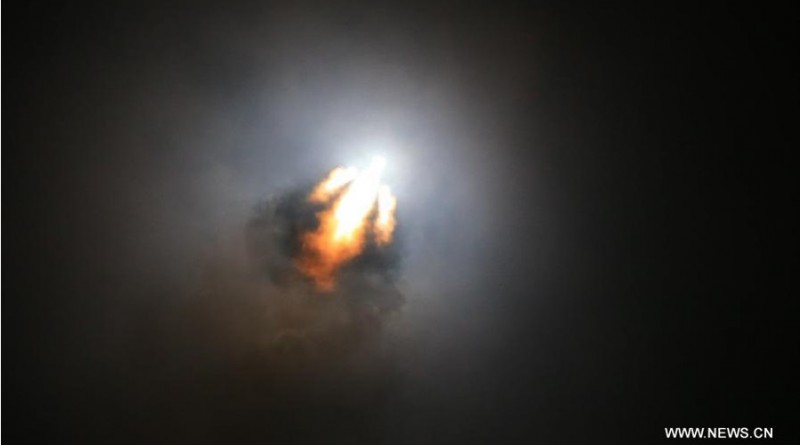 A Chinese Long March 3B rocket lifted off from the Xichang Satellite Launch Center on Saturday around 15:40 UTC on a mission to Geostationary Transfer Orbit.

The identity of the satellite that was hidden under the launcher’s payload fairing was unknown at the time of launch, initially suspected to be a military satellite likely dedicated to Missile Early Warning capabilities but later reported to be a communications test satellite going by the name Tōngxùn Jishù Shiyàn 1.

In the run-up to the launch, the leading suspicion on the identity of the satellite was a Early Warning Satellite set to take a spot in Geostationary Orbit after announcements were made in recent months that China is working to establish a missile early warning capability to be coupled with a ground-based radar system for advance warnings and defense capabilities. The secrecy surrounding the launch further contributed to theories of this being a military mission.

Liftoff from Xichang took place in the dead of night and was only preceded by navigational warnings and air-route closures plus some advance warning for residents near impact sites of launch vehicle debris.

An announcement confirming the success of the launch was issued one hour and 20 minutes after liftoff, though satellite separation had taken place much earlier, around 25 minutes into the mission that employed a standard ascent profile aiming for a Geostationary Transfer Orbit.


Details on the purpose of the satellite are very much unknown as the only piece of information brought forward after the secretive launch was the identification of the satellite as a communications technology test satellite.

The Long March 3B is a three-stage launcher with four boosters installed on the Core Stage to be able to loft payloads into Low Earth Orbit, Geostationary Transfer Orbit and Interplanetary Trajectories.

Each of the four boosters measures 15.33 meters in length and 2.25 meters in diameter holding 37,750 Kilograms of propellant consumed by an DaFY-5-1 engine, a YF-20-type engine that provides 740.4 Kilonewtons (75,500 Kilogram-force) of sea level thrust. The four boosters operate until T+125 seconds with separation occurring about two seconds after cutoff.

Following booster jettison, the first stage continues powered flight on its own. It is 23.27 meters long with a diameter of 3.35 meters and a nominal fuel load of 183,900 Kilograms. First stage propulsion is provided by a DaFY-6-2 engine which is a cluster of four DaFY-5-1 engines that are also used on the boosters. The four engines provide a total sea level thrust of 2961.6 Kilonewtons (302,000 Kilogram-force). Vehicle control during first stage flight is accomplished by individually gimbaling the four engines.

Being 12.92 meters long, the second stage is loaded with 49,605 Kilograms of propellants that are consumed by a single DaFY-20-1 main engine and a four-chamber DaFY-21-1 vernier engine. The main engine delivers 742 Kilonewtons of thrust (75,660 Kilogram-force).

The four chambers of the vernier engine, each with a thrust output of 11.8kN, are gimbaled for three-axis control. The second stage main engine burns for 178 seconds while the verniers burn 6 seconds longer to accommodate the hot staging.

Long March 3B uses a cryogenic upper stage that provides re-ignition capability. Overall, the stage is 12.38 meters long with a reduced diameter of 3.0 meters. The third stage carries a total propellant load of 18,193 Kilograms of Liquid Hydrogen and Liquid Oxygen burned by a YF-75 cluster of two cryogenic main engines providing a total vacuum thrust of 156.9 Kilonewtons (16,000 Kilogram-force).

Long March 3B can be outfitted with a YZ-1 upper stage to perform direct missions to Geostationary Orbit, though this option was apparently not exercised on Saturday, indicating that the satellite is equipped with its own main propulsion system for apogee raising.

China is now stepping up the pace in launches from its three Satellite Launch Centers with at least a dozen more launches to take place before the year is out. Already at the launch pad is a Long March 2D rocket set to launch out of Jiquan next week to be followed by the inaugural flight of the Long March 6 rocket on or around September 19.