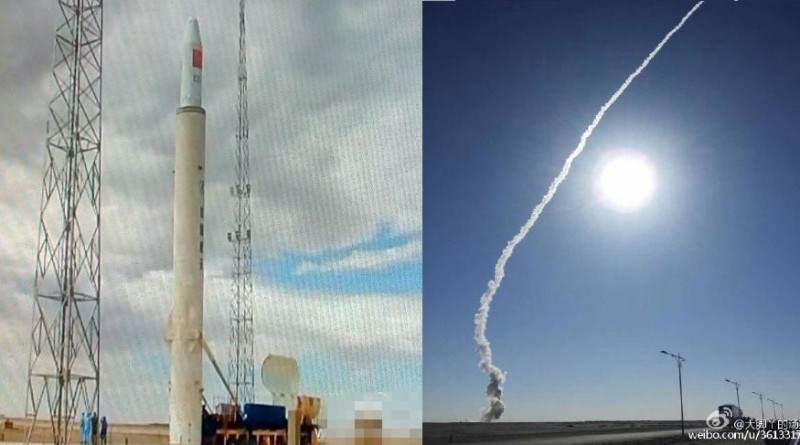 China premiered another rocket Thursday night, launching the Long March 11 for the first time on a demonstration flight. Coming just days after the successful debut of the Long March 6, CZ-11 lifted off from the Jiuquan Satellite Launch Center at 1:41 UTC on Friday, aiming for a Sun-Synchronous Orbit.

Long March 11 is the next in a line of launch vehicles being inaugurated by the Chinese as part of the beginning of a major transition in rocket technology – switching from a toxic propellant combination to environmentally friendly propellants for medium- and heavy-lift rockets and solid propellant for light-lift vehicles. The first vehicle out of this new line of rockets to make its debut was the Long March 6 that completed its maiden flight on Saturday, demonstrating key-pieces of the future Kerosene – Liquid Oxygen rockets.

Long March 6 successfully demonstrated the engine and rocket stage technology that will eventually be employed by its larger companions, the Long March 5 and Long March 7 – building the foundation of China’s future line of launch vehicles capable of lifting all types of payloads including heavy spacecraft setting out to distant targets. Successfully lofting a group of 20 satellites to orbit, Long March 6 delivered plenty of data for the final stages of development of the larger Kerolox launch vehicles.


As the light-weight of the liquid-fueled launch vehicle series, Long March 6 can deliver payloads of up to 1,080 Kilograms to a Sun-Synchronous Orbit. While the light-lifter of the liquid rockets was leaving the launch pad, the Long March 11 rocket as its solid-fueled companion was already in the final stages of launch preparations.

Using an all-solid stack of stages, Long March 11 was designed to provide a cost-efficient option for the launch of small payloads, forgoing the complexity of liquid-fueled vehicles. The price that has to be paid when choosing a solid-fueled vehicle is the loss of flexibility in flying a variety of mission profiles by working with the rocket’s engines through throttling or re-ignition capability. Solid vehicles, however, have proven to be very efficient given their ease of storage and capability of being swiftly readied for launch, providing the operator with a short-notice launch capability.

Long March 11 was kept under tight wraps – no detailed technical information had been released after its development was announced in 2013 when the China Academy of Launch Vehicle Technology detailed its concept of a solid-fueled, quick response launcher that could be affordable by many institutions needing access to space. The development timeline for the CZ-11 rocket was rather steep with its development officially announced in 2013 along with the target of launching the rocket before 2016 – an ambitious goal that was met Thursday night.

At 1:41:40 UTC on Friday, Long March 11 ignited its large first stage – the biggest solid rocket motor developed by the Chinese, delivering the thrust needed to send the vehicle off on its way into orbit.

A technical document published while Long March 11 was still in development called for the vehicle to stand around 18.7 meters tall using a stack of three solid-fueled stages with an Auxiliary Liquid-Fueled Upper Module for precise insertion capability. Measuring 2.0 meters in diameter, the first stage is the largest solid rocket motor operated by China. The first stage is around nine meters long while the second stage measures three meters in length, sharing the first stage’s diameter. The smaller third stage is around 1.4 meters in diameter and one meter long with the payload stack sitting atop, protected by a 1.6-meter diameter payload fairing.

The fourth stage is reportedly powered by a YF-50 engine using liquid propellants and providing precise insertion capabilities into a variety of orbits – an overall design sharing similarities with Europe’s Vega rocket that also employs a powerful stack of three solid stages topped by a low-thrust upper module to finish the orbital insertion.

Photos of the CZ-11 rocket have shown that it uses an above-ground launch container in which it is stored and moved to the pad – not unlike the Russian-operated Rockot and Topol rockets.

The exact performance of the Long March 11 is unknown, some reports claim that it can deliver up to 1,000 Kilograms to a Sun-Synchronous orbit.

Heading out of Jiuquan, Long March 11 was sticking to a southerly departure path, aiming for a Sun-Synchronous Orbit at an altitude of 481 Kilometers. Confirmation of launch success was provided by CAST around half an hour after liftoff. The rocket was carrying three CubeSats plus a SAST-built satellite named Pujian-1 (of which no details are currently known).

The three CubeSats are named Tianwang-1 A, B & C and were developed at the Shanghai Engineering Center for Microsatellites. The TW-1 satellites are two-unit CubeSats and will participate in a series of networking experiments involving a small constellation of low-cost satellites.