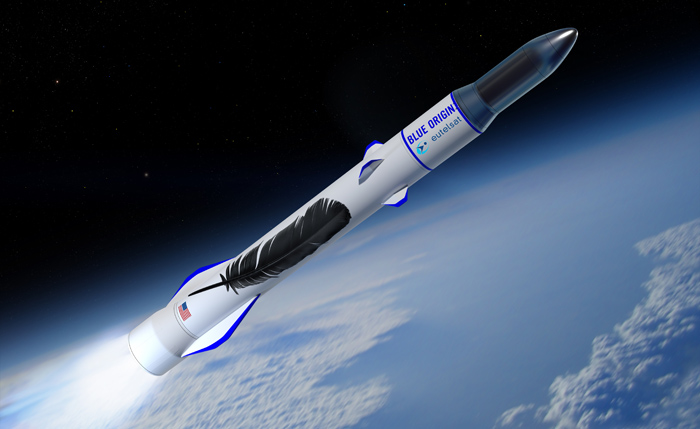 Bezos had Tweeted a series of photos of Blue’s first finished BE-4 engine on Monday and revealed on Tuesday that satellite operator Eutelsat is the first company to sign up for a ride on the massive New Glenn booster currently under development to become a major player in the commercial launch business and human transportation Beyond Earth Orbit.

Blue Origin officially revealed the New Glenn launch vehicle in September 2016 as the company’s next big step after establishing a fully reusable sub-orbital architecture for tourism and research with the New Shepard Booster and Crew Capsule combination that will start operational missions relatively soon. Four years of development had already gone into the project when New Glenn was revealed to the public as one of the most powerful rockets to launch from U.S. soil.


Per the initial announcement, New Glenn will feature a massive, seven-meter diameter reusable first stage hosting seven BE-4 engines, each with a thrust of 2,450 Kilonewtons and burning Liquefied Natural Gas and Liquid Oxygen. The rocket’s second stage will be powered by a vacuum-optimized version of the BE-4.

The 82-meter tall two-stage vehicle will be used for heavy-lift missions to Low Earth Orbit while high-energy deliveries to GTO and Beyond Earth Orbit would be handled by a 95-meter tall version sporting a cryogenic third stage powered by a version of Blue’s BE-3 that is already flying on the New Shepard.

Bezos said New Glenn is on track to start launches in 2020 and revealed performance numbers for the new vehicle that were withheld in the initial announcement.

Revealing the first customer to book a ride on New Glenn, Bezos said that French-based Eutelsat had signed up to fly an unnamed satellite on the rocket as early as 2021. In a statement, Eutelsat said New Glenn “will be compatible with virtually all Eutelsat satellites, giving flexibility to allocate the mission 12 months ahead of launch.”

“Eutelsat has launched satellites on many new vehicles and shares both our methodical approach to engineering and our passion for driving down the cost of access to space,” said Bezos. No financial details of the launch contract were revealed.

Tuesday’s announcement was accompanied by a new promotional video for the New Glenn Launch Vehicle, showing a typical mission profile with special focus on the reusability of the first stage booster. After dispatching the second stage on its way to orbit, the first stage is planned to land on a ship in the ocean, making use of aerodynamic fins to maneuver toward the sea-going vessel and using a subset of its engines to slow down for a gentle touchdown on six deployable landing legs – a design chosen for its robustness as a successful landing would still be possible in case one leg fails.

The principle of Blue’s booster recovery is similar to the Drone Ship landings used by SpaceX, however, Blue Origin can be credited with coming up with the idea first as evident in patent documentation filed in 2010. A dispute arose after SpaceX petitioned the Patent Board, citing information on the landing of rocket stages on oceangoing vessels has been published in academic work in the 1990s. Blue Origin withdrew most claims of the infamous ‘Patent 321’ in 2015, putting the conflict between the companies to rest, at least for the time being.

One interesting caveat and difference to SpaceX’s ASDS will be that Blue Origin’s booster will land on a moving recovery vessel for added stability.

Bezos placed emphasis on the rocket’s heritage in the New Shepard vehicle that demonstrated sustainable re-usability in a sub-orbital mission architecture, successfully flying five missions to the edge of space with minimal refurbishment in between, also showcasing the design’s robustness by sticking a smooth landing after an in-flight abort demonstration the booster was not planned to survive.

On Monday, Jeff Bezos posted photos of the first fully assembled BE-4 engine at the company’s Kent facility, also noting that production engines #2 and #3 are expected to follow in close succession. BE-4 has been designed for a 100-flight lifetime and is expected to be used by the New Glenn Rocket as well as United Launch Alliance’s future Vulcan rocket. Although ULA is keeping its options open, BE-4 has been identified as the primary candidate for Vulcan with Aerojet Rocketdyne’s AR-1 considered a fallback plan in case BE-4 runs into major problems.

Blue Origin is expected to begin hot-fire tests of BE-4 at the company’s West Texas site in the near future to qualify the engine for use on New Glenn and Vulcan, both aiming for initial flights before the end of 2020.

Blue Origin is building a large production facility at Exploration Park, just outside the gates of Florida’s Kennedy Space Center, where the New Glenn rocket will be assembled for launch from Space Launch Complex 36 at Cape Canaveral Air Force Station that has been taken over by Blue in September 2015.