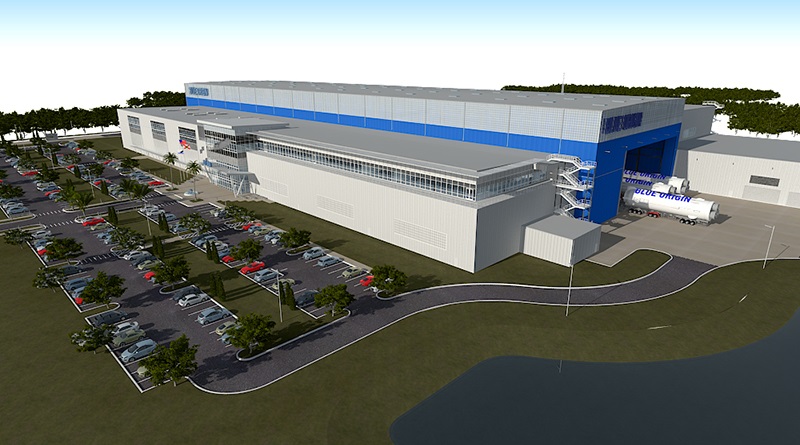 Blue Origin has broken ground for its future manufacturing facility outside the gates of Florida’s Kennedy Space Center where the company will construct its orbital launch vehicles to be launched from Launch Complex 36 at Cape Canaveral Air Force Station.

Jeff Bezos, Blue Origin founder, shared news in an email update on Tuesday accompanied by photos of ground clearing work at the construction site and renderings of the finished facility that is expected to open for business before the end of 2017.

“Among other things, the facility hosts large scale friction stir welding and automated composite processing equipment,” the email read. “All of the vehicle will be manufactured in this facility except for the engines.”

Blue Origin announced it would initially create 300 jobs at is East Coast Base with the production of launch vehicles located close to the launch site.

In his June 28 email, Bezos noted the 70,000-square meter facility would be “custom-built from the ground up to accommodate manufacturing, processing, integration and testing” – housing all elements from the start of manufacturing through rollout of the finished vehicle under one roof.

Plans exist for an additional 14,000m² manufacturing facility and 4,500m² processing building to be added later.

Blue Origin, currently testing key space technologies aboard the company’s sub-orbital New Shepard reusable launch vehicle, is eyeing the first flight of its larger orbital rocket in 2020. More details about the vehicle, going by the placeholder name of Very Big Brother, will be shared later in 2016.

The launch vehicle’s fist stage will be powered by the BE-4 engine, currently in development by Blue Origin to also fly on the Vulcan rocket operated by United Launch Alliance. The second stage would use the Liquid Oxygen/Liquid Hydrogen BE-3 engine. No information on the number of engines on either stage has been revealed yet, though renderings of the new manufacturing facility appear to show multi-engine core stages.

Bezos noted in his email that the BE-4 engine would be manufactured at the company headquarters in Kent, Washington before production would shift to a dedicated plant when higher production rates will be necessary.

Launch Complex 36 supported the Atlas launch vehicle family from 1962 to 2005 with two active launch pads supporting close to 150 missions. After retirement of the Atlas III rocket in 2005, the two pad’s umbilical towers were demolished in 2006.

Prospective users interested in LC-36 over the years included the U.S. Air Force for the Athena III launch system and Moon Express for testing of a lunar lander vehicle.

The pad is located around 14.5 Kilometers from Blue Origin’s manufacturing facility as the crow flies.

Similar to their sub-orbital rocket, Blue Origin will aim to return the first stage of their orbital vehicle to the launch site for re-use while an expendable second stage finishes the job of boosting crews or payloads into orbit.