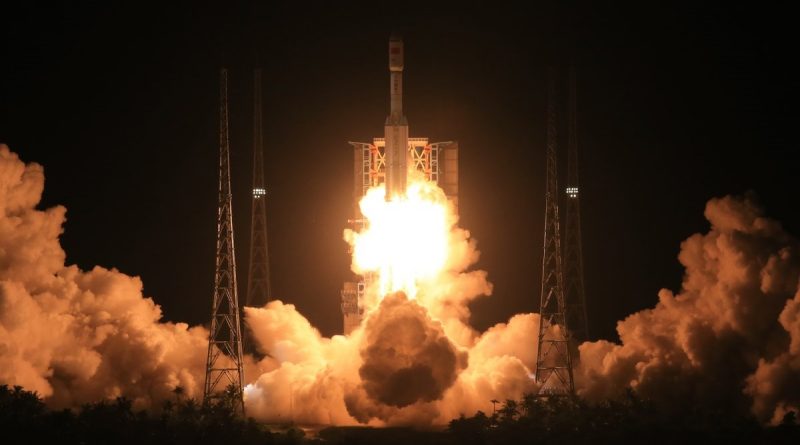 A space debris clean-up satellite launched on the inaugural Long March 7 flight over the weekend raised concerns among observers that China may be working on the militarization of space by developing anti-satellite applications.

Aolong-1, ‘The Roaming Dragon,’ was one of four small satellites sent into orbit aboard the Long March 7 rocket along with a ballast mass and a scaled prototype of China’s Next Generation Crew Vehicle. According to the Harbin Institute of Technology, the small satellite will complete a demonstration of space debris mitigation technology by using a small robotic arm to grab debris pieces and launch them toward the atmosphere.

Aolong-1 – a product of CALT/Harbin – reportedly carries a sub-satellite that will be released at some point in the mission to then be grabbed by the robotic arm. The satellite was most likely delivered to an orbit of 200 by 375-Kilometer orbit, indicating its mission is planned to be of short duration given the longevity of the orbit.


According to Chinese space officials, Aolong-1 is only the first in a series of satellites tasked with the collection of space debris as the country develops the technology needed to retrieve small debris up to entire spacecraft to be safely brought to a destructive re-entry.

Satellite servicing missions, both for repairing spacecraft and debris mitigation, have received a growing interest in recent years and both, the European Space Agency and different U.S. projects are working on spacecraft that could rendezvous with an uncooperative target satellite and then either repair or refuel it, or move it out of orbit.

However, during wartime, this technology could also be used to approach foreign satellites and deliberately disable them to eliminate vital space-based assets for communications, image reconnaissance and intelligence-gathering.

A story posted by the South China Morning Post quotes an unnamed researcher with the National Astronomical Observatories in Beijing as saying that the military could see potential in the tasks carried out by Aolong-1 and its successors. Technology developed for the peaceful purpose of space debris mitigation will not raise eyebrows, though may feed into development of military anti-satellite system, but the same is true for the U.S., Europe and Russian developments that have been observed in orbit in recent years.

China is no stranger to anti-satellite capability development as evident in the 2007 missile launch that destroyed the retired Fengyun-1C weather satellite at an altitude of 865 Kilometers and resulted in over 2,000 trackable debris and an estimated 15,000 debris particles too small to track from the ground. FY-1C debris since then have posed threats to low-orbiting spacecraft including the International Space Station that had to perform multiple Debris Avoidance Maneuvers to move out of the way of some of the debris pieces.

Although the 2007 anti-satellite test created thousands of potentially hazardous debris pieces, it took until 2013 for a debris impact to disable a spacecraft when the Russian BLITS laser-ranging target was hit by a piece of the Chinese satellite at a relative velocity around 9.7 Kilometers per second.

Another Chinese mission exploring tools of inter-satellite rendezvous and in-space grappling was launched in 2013 when a Long March 4C rocket lifted the Chuang Xin 3 (CX-3), Shiyan 7 (SY-7) and Shijian 15 (SJ-15) satellites. After their successful launch, the satellites entered a complex orbital ballet, involving SJ-15 as the active satellite and CX-3 being the initial target. The two flew at different distances before SJ-15 departed and maneuvered into a different orbit to meet up with the eight-year old Shijian-7 spacecraft, coming to within a few hundred meters based on tracking data.

SY-7 remained quiet for several months before it separated an object and pulled away from it to then close in from several Kilometers out, likely testing an optical navigation system to guide the rendezvous, followed by a robotic grappling of the separated object.

According to tracking data, multiple such separation, approach and grapple exercises were performed with the two satellites remaining within five Kilometers of each other.

After three years of tests including multiple visits to Shijian-7, the SJ-15 satellite raised its orbit around December 2015 and again met up with CX-3, demonstrating multi-orbit rendezvous and satellite inspection capability.

No official comment has been made by the Chinese on the objective of these missions and – as can be expected – western media immediately made the connection to anti-satellite weapon development.

On the Russian side, a similar experiment was performed in 2014, involving a mysterious satellite designated Kosmos 2499 launched as a secondary payload atop a Rockot booster.

Orbital data showed the satellite lowering its orbit and meeting up with the Briz-KM rocket stage it had launched on. While Kosmos 2499 started out in a 1,500-Kilometer orbit, the Briz-KM had lowered its perigee to under 1,200km to enter a disposal orbit, requiring some maneuvering by the satellite to match the orbital trajectory of its upper stage.

Several weeks of rendezvous maneuvers delivered the satellite to within a Kilometer of the Briz-KM, possibly even closer but public tracking data is not sufficient to assess any close approaches within a few hundred meters.

Kosmos 2504, launched as a secondary payload on Rockot in 2015, separated in the Briz-KM disposal orbit, subsequently linked up with the upper stage and, according to satellite trackers, came into contact with Briz-KM – either in a deliberate docking or an unintentional impact. The objects separated for several months before a second rendezvous campaign was started.

Russian officials acknowledged the existence of the mysterious satellites and reported they were built by Roscosmos and the Russian Academy of Sciences for a research and education mission. Western press had quickly stamped the spacecraft as ‘killer satellites.”

Missions flown to date involved larger satellites of several hundred Kilograms such as DART flown unsuccessfully in 2005, or smaller satellites such as the first LONESTAR satellite pair released from the Space Station in January to test out autonomous rendezvous and docking technologies.

An operational mission operated by the United States is GSSAP – the Geosynchronous Space Situational Awareness Program, currently comprised of a pair of satellites roaming above and below the Geostationary Belt to keep tabs on the activity of various foreign communications and surveillance satellites. It is not known how close the GSSAP satellites have to come to their target to accomplish their task.

With all the different programs under operation of various international agencies, operational autonomous, uncooperative rendezvous technology will be a reality in just a few years time and its potential for military use will continue to loom as a cause of international conflicts over the militarization of space.