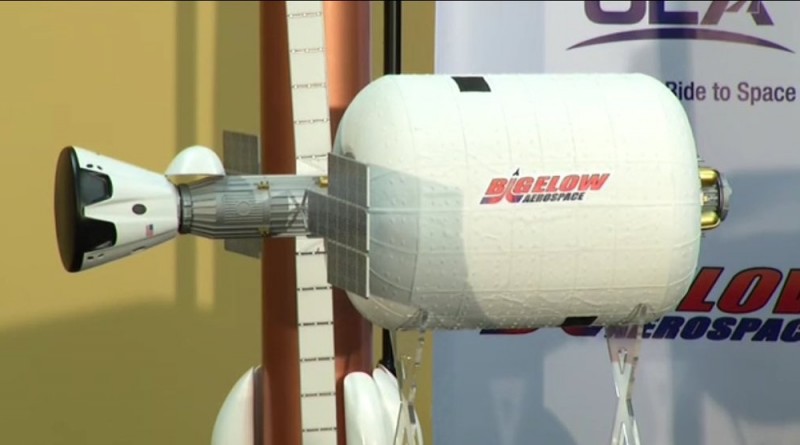 Bigelow Aerospace is partnering up with United Launch Alliance for the deployment of Bigelow’s habitat modules to orbit in an effort of expanding the commercialization of Low Earth Orbit. In an announcement made on Monday, the two companies outlined a launch of Bigelow’s BA330 expandable module in 2020 atop an Atlas V in the first-ever commercial partnership between a launch provider and habitat manufacturer.

Robert Bigelow’s Las Vegas based company last week celebrated the successful launch of their biggest module yet when the SpaceX Dragon flew to the International Space Station where the Bigelow Expandable Activity Module (BEAM) will take up residency for a two-year demonstration mission of expandable habitat technology. Bigelow launched two smaller test modules into orbit in 2006 and 2007 as a pathfinder for this type of expandable module technology and partnered up with NASA in 2012 for the development of BEAM.


BEAM is significantly smaller than the operational modules that are being developed by Bigelow for a number of commercial applications. BA330 is Bigelow’s first full-scale habitation module using expandable technologies, developed by Bigelow since the company’s formation in 1998.

Large enough to facilitate a crew of six, the module could build the basis of a modular Space Station consisting of several modules for use by commercial or private customers for either crewed or uncrewed missions with crewed flights requiring the procurement of a launch/landing spacecraft. The module will have a pressurized volume of 330 cubic meters, hence its numeric designation, measuring 6.7 meters in diameter and 13.7 meters in length with a launch mass of 20 metric tons. Bigelow hopes to have two BA330 modules ready for launch in 2020, being manufactured at a production facility opened in 2011.

“We are exploring options for the location of the initial B330 including discussions with NASA on the possibility of attaching it to the International Space Station (ISS),” said Robert Bigelow. “In that configuration, the B330 will enlarge the station’s volume by 30% and function as a multipurpose testbed in support of NASA’s exploration goals as well as provide significant commercial opportunities. The working name for this module is XBASE or Expandable Bigelow Advanced Station Enhancement.”

The 20-metric-ton BA330 will require Atlas V’s most powerful version ever flown with five Solid Rocket Boosters to provide the necessary thrust in the initial flight phase and a Centaur Upper Stage with two RL-10 engines – not currently in operation – to finish boosting the spacecraft to Low Earth Orbit. BA330 can be used as an attachable module for ISS or as an independent habitat and research volume serviceable by Commercial Crew Providers.

Bigelow is currently working on full-scale development units of the BA330 unit, starting out with a full-scale flight-like unit to be followed by a full engineering unit for a range of testing operations including hypervelocity impact testing, inflation tests, long-term duration testing, and leak testing.

A pair of BA330 modules will be ready for launch in 2020 to be used for a variety of purposes like commercial research by educational institutions, commercial companies and foreign government customers. Beyond its industrial and scientific applications, BA330 may become a destination in space tourism and serve as a human spacecraft for missions to the Moon and Mars. Production of BA330 modules will ramp up once the first two modules have been launched to be able to populate several locations in addition to ISS.

United Launch Alliance is the only U.S. launch provider suitable for Bigelow’s modules given the required fairing size to launch the large modules. The two companies hope to have a lasting relationship and are currently working out business construct, commercial product offerings and marketing plans.

ULA and Bigelow did not go into financial details, however, a launch slot in ULA’s manifest has been reserved and integration work for BA330 on Atlas V has already begun. Bigelow stressed that the current focus is to convince NASA to host a BA330 on ISS, partially financing the first module as a significant addition to ISS in terms of space and research facilities.

For the near term, Bigelow will be focused on their first module headed to ISS as BEAM is set for installation on the Node 3 module later in the week with inflation planned in the late May time-frame. BEAM will collect a wealth of data using temperature and pressure sensors as well as instrumentation to document debris impacts over a period of two years to assess the long-term habitability of expandable structures in space which are envisioned to become part of flights beyond Earth orbit.