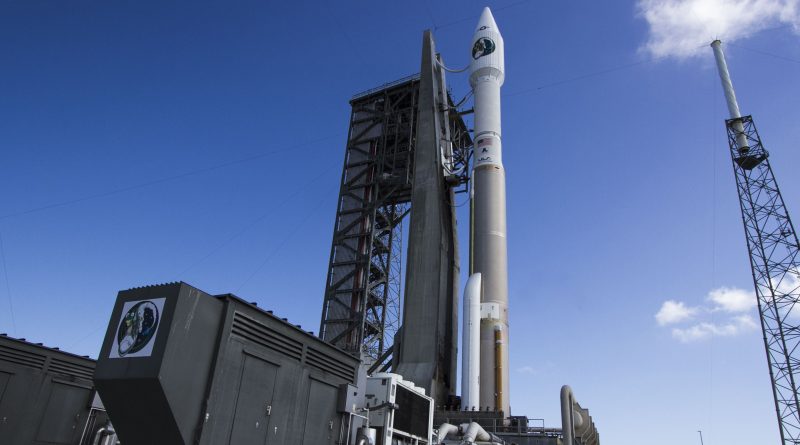 A ULA Atlas V rocket rolled to its Cape Canaveral Launch pad on Tuesday to set up for a Thursday morning liftoff with the classified NROL-61 payload for the U.S. National Reconnaissance Office responsible for the operation of all American spy satellites.

Liftoff is timed for 12:37 UTC, 8:37 a.m. local time – the opening of a classified launch window, as is standard for the secretive missions conducted by the NRO that was founded back in 1961 and operated in complete secrecy for three decades until its existence was first acknowledged.

The NRO is tasked with the design, construction and operation of all U.S. intelligence-gathering and supporting satellites as well as the distribution of satellite intelligence to various intelligence agencies including the NSA, DIA and NGA.

As an intelligence agency, the NRO goes through great lengths to keep the identity of its satellites and their operational locations secret, however, a worldwide network of satellite trackers keeps tabs on all NRO satellites and occasional information leaks provide data helpful in pin-pointing the nature of NRO missions.


NROL-61 is the third NRO launch of the year and unlike all of the recent NRO missions, this launch provides a challenge when it comes to guessing the satellite hidden under Atlas V’s payload fairing. Atlas V 421 – enlisting the help of two Solid Rocket Boosters – was never used for a previous NRO mission, suggesting this satellite is either a new project or a modified follow-on to an existing program.

The leading candidate for this missions is NROL-61 being the first in the fourth generation of the Satellite Data System.

This theory is based on the launch vehicle configuration, the launch trajectory indicating a launch to Geostationary Transfer Orbit and the timing of the mission within the overall framework of the NRO’s existing programs. However, the possibility of this being a completely new satellite can not be fully ruled out until satellite trackers can identify the spacecraft’s operational location and possible activities in orbit.

The newer generation of SDS satellites operate exclusively from Geostationary Orbit and that is where Thursday’s Atlas V launch will be headed – either to a Geostationary Transfer Orbit or a direct insertion into GSO, confirmed through navigational warnings that show Atlas V heading to the east-south-east, the standard path to GTO from Florida’s Space Coast.

Also continuing with Thursday’s mission is a tradition of interesting mission insignia chosen by the NRO.

Often including hints on what payload might be flying, NRO mission patches have featured a wide variety of creatures ranging from the All-Seeing Eye over Dragons and raging bulls to Greek gods and the controversial octopus featured on the NROL-39 mission.

The NROL-61 patch features an anthropomorphized lizard riding shotgun on the Atlas V rocket. Nicknamed Spike, this mission’s mascot is part of a STEM initiative of the NRO but the patch also continues with the typical hints regarding the payload’s identity – showing four stars with one of them standing out from the others – suggesting the payload to be either the fourth of its kind or part of the fourth-generation of a system (which would fit the SDS theory).

Thursday’s launch marks the 64th launch of the Atlas V, the 109th overall launch for ULA and the fourth of ten Atlas V launches of 2016.

Officials provided the formal clearance for launch on Monday after a clean Launch Readiness Review looking at the status of the launch vehicle, payload and all support systems on the ground – clearing Atlas V for a Tuesday morning rollout.

Sitting atop its Mobile Launch Platform, Atlas V emerged from its Vertical Assembly Building where it was stacked over the past weeks at 9:05 a.m. local time for a half-hour ride to the pad.

Standing tall at Space Launch Complex 41, Atlas V was loaded with Rocket Propellant 1 Tuesday afternoon ahead of heading into a seven-hour countdown in the early hours on Thursday during which final checks of the launcher will be performed before the two-stage stack will be filled with cryogenic LOX and LH2 to set up for a 12:37 UTC liftoff.

Meteorologists have issued a positive forecast with an 80% chance of favorable conditions during the day’s launch window. The only concern are cumulus clouds in a weather pattern that should be favorable for a morning launch as sea breeze conditions with coastal showers only become a concern later in the day. In case of a 24-hour delay, conditions will remain the same.

Blasting off, Atlas V will push uphill with a total thrust of 734,700 Kilogram-force provided by the two-chamber RD-180 engine on the core stage and the twin Aerojet Rocketdyne Solid Rocket Boosters. Within seconds of lifting off, Atlas begins its pitch and roll maneuvers to head east-south-east on a 99° launch azimuth, passing Mach 1 just 47 seconds into the flight with Maximum Dynamic Pressure following five seconds later.

The twin boosters burn out at T+94 seconds, but will be held by the vehicle until T+2 minutes and 9 seconds to ensure a safe off-shore impact. Continuing uphill powered by the RD-180 alone, Atlas V will cross the boundary of space and begin throttling back to limit stress on the vehicle when approaching Main Engine Cutoff – expected at T+4 minutes and 10 seconds. Six seconds after MECO, the Common Core Booster will be jettisoned to clear the way for the trusted Centaur to assume control of the flight.

For a GTO mission which is the most probable scenario, there are three options:

1) the standard GTO flight path with two burns, the first into an elliptical Low Earth Parking Orbit and the second a little over 20 minutes into the flight to boost the apogee and reduce the inclination, leaving the satellite in an orbit with a perigee of several hundred Kilometers and an apogee at 35,750km,

2) a two-burn profile first into an elliptical transfer orbit followed by a coast of ~80 minutes to set up for a second burn lifting the apogee to Geostationary Altitude and significantly raising the perigee to several thousand Kilometers, or

3) a three-burn profile, first into LEO, followed by apogee-raising at the equator ahead of a lengthy coast to set up for a third burn to finish raising the apogee, but also adding to the perigee & making an efficient reduction in inclination.

The first option would take less than 45 minutes from launch to spacecraft separation, the second – as used by TDRS – would take around 1 hour and 45 minutes, and the third – recently utilized by MUOS 5 – would require just under three hours. Navigational warnings published for the deorbit of the Centaur Upper Stage fits the first flight profile with NROL-61 reaching its intended GTO around 29 minutes after liftoff and Centaur re-starting its engine a little over one hour into the mission to set up for its fiery demise over the Pacific Ocean seven hours later.

Confirmation of mission success will be provided after spacecraft separation which will be the last to be heard of NROL-61 from its operators as the mission drifts into complete secrecy. Satellite trackers will be on the lookout for the spacecraft in its initial orbit to track its climb into Geostationary Orbit and monitor where NROL-61 will operate from – providing clues to its role within the NRO’s satellite fleet.