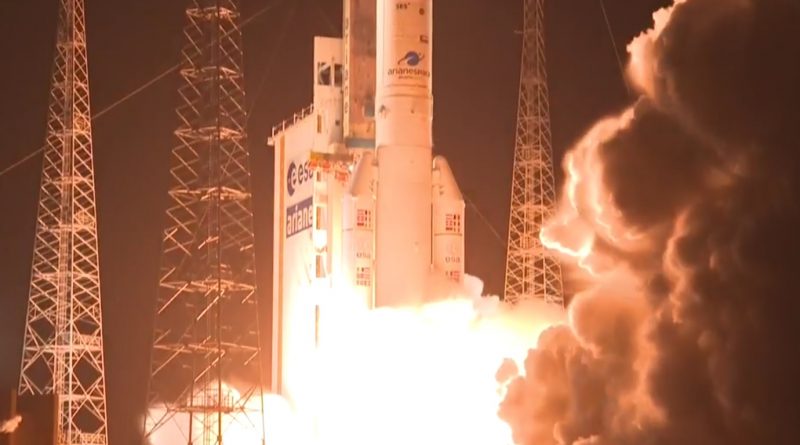 Europe’s Ariane 5 launch vehicle, after 82 consecutive successes over a 15-year streak, encountered a potentially serious anomaly on Thursday when lifting a pair of cutting-edge communications satellites into a high-energy Supersynchronous Transfer Orbit.

From an initial assessment, it appears the launch proceeded smoothly through first stage flight and telemetry was lost less than half a minute into operation of the rocket’s second stage tasked with lifting the SES 14 and Al Yah 3 satellites into an elliptical orbit.

It was not immediately clear if the mission achieved an orbit at all since initial attempts to communicate with the satellites were unsuccessful. However, it was later confirmed that both satellites were alive, had reached a stable orbit and health assessments were underway to develop further steps.

Arianespace CEO Stéphane Israël confirmed the anomaly a little over an hour after Ariane 5’s signals disappeared from screens at Mission Control and the company issued the following statement later in the night:

The launcher’s liftoff took place on January 25, 2018, at 720 p.m. (French Guiana time). A few seconds after ignition of the upper stage, the second tracking station located in Natal, Brazil, did not acquire the launcher telemetry. This lack of telemetry lasted throughout the rest of powered flight.

Subsequently, both satellites were confirmed separated, acquired and they are on orbit. SES-14 and Al Yah 3 are communicating with their respective control centers. Both missions are continuing.

The day’s events up to the unexpected loss of signal from the launch vehicle were by the book. Ariane 5 entered countdown operations at 10:58 UTC and headed into propellant loading four and a half hours before the opening of the 45-minute launch window at 22:20 UTC.

Piercing into the night over the edge of the Amazon, Ariane 5 fired its twin Solid Rocket Boosters for the first two minutes and 15 seconds of the flight before dropping them into the Atlantic and powering into space with the core stage’s Vulcain 2 engine alone. The fairing separated just over three minutes into the flight and the second stage of the rocket took over at the nine-minute mark to complete the final boost into orbit, tasked with accelerating the satellites to nearly 9.5 Kilometers per second at the point of orbit injection – planned 24 minutes and 46 seconds after liftoff.


Telemetry displays at the Jupiter Control Room showed Ariane 5 was traveling on the planned trajectory when, approximately nine minutes and 29 seconds into the flight, signals from the ESC-A upper stage were lost. At that point, the vehicle was 195 Kilometers in altitude, 1,720 Kilometers downrange from the launch site and traveling at a speed of 7.02 Kilometers per second – still short of orbital velocity.

The Loss of Signal (LOS) from the ESC-A upper stage came after the Range Operations Manager, through available telemetry, confirmed the start-up of its HM-7B engine that was expected to fire for nearly 16 minutes to boost the stack into an elliptical orbit peaking 45,000 Kilometers above the planet. LOS coincided with the point in the mission where the Galliot Tracking Station on a hill near the launch site would have lost telemetry as Ariane 5 traveled below the horizon.

Typically, Ariane 5 missions have a seamless handover between Galliot and the Natal Ground Station in Brazil and, depending on the mission profile, there would only be short gaps between the Natal, Ascension Island and Libreville tracking stations before the Malindi Station in Kenya covers the separation of the satellites. However, all downrange stations were only able to report silence on Thursday.

This was the first major in-flight anomaly for Ariane 5 since December 11, 2002 when the inaugural flight of the Ariane 5 ECA variant failed due to a leak in the nozzle cooling circuit of the then-unproven Vulcain 2 engine, making its first flight. Since then, Ariane 5 successfully performed 82 missions and lifted over 160 satellites into their target orbits. Overall, Ariane 5’s record prior to Thursday’s mission were 96 flights of which 92 were fully successful, two were outright failures and two were classed as partial failures (all failures/partial failures occurred between 1996 and 2002).


The outcome of Thursday night’s Ariane 5 mission remained uncertain in the immediate aftermath of the event.

Ground stations tasked with the initial communications with the two satellites after separation from the upper stage did not detect the spacecraft in their target orbit and were then switched into a coarser search mode to look for the satellites in a lower orbit. Eventually communications were received from both, SES 14 and Al Yah 3, confirming they were alive and had separated from the Ariane 5 launch vehicle.

Orbital tracking data from the Joint Space Operations Center is typically made available within a few hours of objects reaching orbit and will provide firm orbital parameters for both of the satellites.

SES 14 is an all-electric satellite relying on a PPS5000 high-performance ion thruster system while Al Yah 3 has a hybrid system combining traditional chemical engines for orbit-raising with Hall Current Thrusters for orbit topping and stationkeeping. Electric propulsion is beneficial when recovering from a lower-than-planned injection.

After a successful 2017 with 11 launches, Arianespace was looking to pick up right where they left off and move into what was expected to become a record-breaking year for the company with up to 14 missions.

Per the company’s 2018 plans, Ariane 5 was to fly up to seven times, five “bread-and-butter” missions for the workhorse vehicle with pairs of satellites headed into Geostationary Transfer Orbit and two institutional missions contracted by ESA for the launch of the next set of Galileo Navigation Satellites and the BepiColombo mission to Mercury.

Soyuz has up to four missions on its South America manifest including the first delivery for the OneWeb Internet constellation and the light-lift Vega will make up to three launches in 2018 with Earth-observation satellites including the long-delayed ADM Aeolus wind-measurement satellite.

While Soyuz and Vega should be unaffected by Thursday’s anomaly, Ariane 5 – depending on the circumstances of the mishap – may be facing a lengthy grounding. This is of particular concern for the ESA-JAXA BepiColombo mission that was to embark on a seven-year journey through the inner solar system to become only the second spacecraft to enter orbit around Mercury. Because its mission design is highly dependent on orbital mechanics, BepiColombo has a limited launch window running from October 5 through November 28.

Another high-profile payload lined up on Ariane’s manifest is NASA’s $9 billion James Webb Space Telescope, targeting launch in the March to June 2019 time frame. Ariane 5 was chosen for JWST in part due to its excellent track record which will now be questioned by policy-makers.

The two satellites, along with their launch vehicle adapters, gave the VA241 mission a total payload upmass of 9,123 Kilograms – not coming close to Ariane’s GTO capacity of 10.8 metric tons and allowing surplus performance to be used for additional inclination reduction and a Supersynchronous Delivery roughly 10,000 Kilometers higher than a standard Geotransfer orbit.

Riding in the upper payload berth was the 4,423-Kilogram SES 14 satellite, an Airbus powerhouse with an onboard power supply of 16 Kilowatts fed to a state-of-the-art ion propulsion system and a hybrid communications payload. It was the 53rd satellite operated by Luxembourg-based SES to launch on an Arianespace vehicle.

It is only the second satellite to employ the Eurostar-3000EOR platform introduced by Airbus Defence and Space in 2014 to respond to an industry trend toward all-electric satellites that allow for more cost-effective launch opportunities while maximizing payload capacity, both for mass and power.

Through performance optimization on its PPS5000 electric propulsion system and the addition of thrust vector control, Airbus managed to cut the expected transit time into Geostationary Orbit to under four months for the operational EOR version, hoping to create a competitive platform on the commercial satellite market. Eutelsat 172B was the first EOR satellite to take flight and Airbus has another six on order after SES 14.

SES 14 hosts a powerful payload comprising 20 Ku-Band and 28 C-Band transponders and a Digital Transparent Processor developed in the UK for additional flexibility through bandwidth customization. The satellite leverages a combination of wide-beam coverage in both C- and Ku-Band for broadcasting services while data-intensive services will be provided via high-throughput Ku-Band narrow-beam coverage.

Positioned at 47.5 degrees West, SES 14 is planned to deliver services to the Americas, the Caribbean, West Africa, Europe and maritime & aeronautical connectivity over the North Atlantic.

Residing on the satellite’s Earth-facing panel is NASA’s GOLD instrument, the Global-scale Observations of the Limb and Disk Instrument. The $66 million science sensor is the first NASA instrument to fly as a hosted payload on a commercial geostationary satellite, dipping into the resources provided by SES 14 for a two-year mission collecting unprecedented data from a rarely-studied region of Earth’s upper atmosphere.

The 37-Kilogram GOLD package comprises two independent Far Ultraviolet Spectrographs, each sensitive for wavelengths of 132 to 162 nanometers and hosting a scanning mechanism to assemble one full image of Earth’s ionosphere and thermosphere across the Western Hemisphere every half hour from which scientists will extract atmospheric temperature profiles and composition maps of these vital layers where Earth’s atmosphere meets the solar influx.

This data will provide a refined understanding how these two atmospheric layers respond to bombardment by solar radiation and forcing from below (i.e. through weather systems in the dense atmosphere).

GOLD is expected to help improve space weather forecasts to provide better warnings of events that could affect the operation of communications and navigation satellites that billions rely on during their everyday life without even realizing it. The major advantage of GOLD over satellites actually traversing the thermosphere will be getting the big picture of an entire hemisphere at a cadence of 30 minutes – allowing for the first-ever a separation of the time and space domain for thermospheric temperature and constituent profiles that will yield insight into the processes triggering geomagnetic storms.

Riding in the lower position underneath the Sylda was the 3,795-Kilogram Al Yah 3 satellite, becoming the third satellite in YahSat’s Geostationary fleet to expand the company’s services into 20 previously unexplored market areas. The satellite is the most complex communications satellite ever built by Orbital ATK, employing the company’s new GEOStar-3 platform and hosting a high-throughput Ka-Band payload with a large number of ground beams and advanced digital processing chains to handle vast amounts of data.

GEOStar-3 leverages lessons learned from nearly three dozen GEOStar-2 missions and implements critical improvements in the area of propulsion, power generation and spacecraft structure to create a low-mass, high-performance platform capable of carrying payloads of up to 800 Kilograms and 8,000 watts.

A hybrid propulsion system will enable GEOStar-3 to minimize the time-to-station, thus accelerating its in-service date, while electric propulsion will allow for Stationkeeping in Geostationary Orbit over extended missions, allowing satellites to continue generating revenue beyond their planned design lives.

Al Yah 3 carries a high-throughput Ka-Band payload generating 53 active high-power user beams supporting high-speed data services for end-user applications as well as IP backhaul for telecommunications service providers. Al Yah 3, stationed over the Atlantic Ocean, will reach 60% of Africa’s and over 95% of Brazil’s population and a number of telecommunications providers have already booked capacity on the satellite including the Konnect Africa venture of Paris-based Eutelsat and network operator Talia.