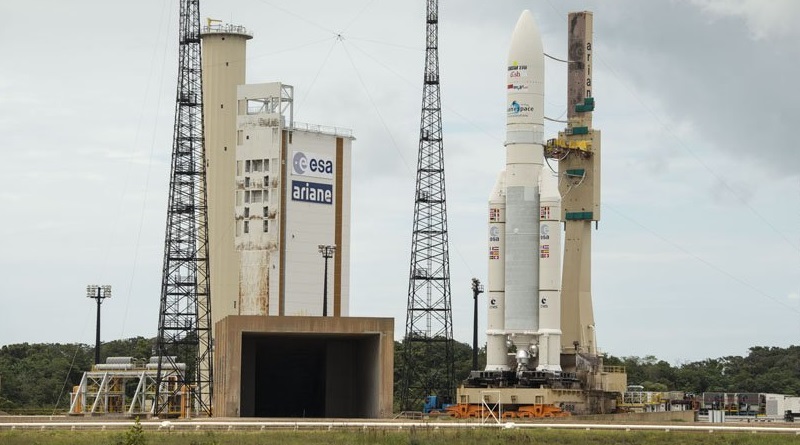 Europe’s Ariane 5 workhorse was moved to its French Guiana launch pad on Thursday to set the stage for liftoff during a 70-minute launch window opening at 20:30 UTC on Friday.

The previous record for Ariane 5 was set in February 2013 when the launcher lifted 10,500 Kilograms to a highly elliptical transfer orbit.


The VA230 mission had to be postponed from a June 8 target due to a problem that occurred ahead of the planned rollout of the 55-meter tall rocket. The anomaly was associated with a fluid connector between the cryogenic upper stage and the launch table – a condition similar to a problem encountered during the VA222 campaign in April 2015 which also pushed the launch back eight days to facilitate a replacement of the faulty component.

Arianespace managers and payload teams went through a Delta Launch Readiness Review on Tuesday to assess the hardware replacement and look at the readiness of all systems needed to support the mission, on the Ariane 5 vehicle and the ground. With no issues present, Ariane 5 was once again cleared to enter launch operations.

Rollout was again delayed on Wednesday when a different connector in the upper portion of the vehicle caused trouble, leading to a 24-hour delay of the launch.

Ariane 5 – sitting atop one of two operational Mobile Launch Tables – emerged from its Final Assembly Building on Thursday and completed a short rail-ride to the ELA-3 launch site. Once positioned atop the pad, the vehicle was connected to commodity lines and engineers began the process of closing out the vehicle and launch facility to set up for countdown operations on Thursday.

The countdown will formally pick up eleven and a half hours prior to the opening of the launch window when final preparatory steps at the launch pad are initiated to prepare the Ariane 5 rocket for propellant loading and button up all ground systems. The rocket is powered up at T-7.5 hours for a set of checkouts to confirm the vehicle is ready for launch prior to commencing tanking operations.

The twin boosters will burn out at T+2 minutes and 21 seconds before separating from the Ariane 5 launch vehicle. Powered by the Vulcain 2 engine alone, the vehicle will depart the dense atmosphere for the separation of the Payload Fairing three minutes and 25 seconds into the flight.

The first stage will shut down eight minutes and 54 seconds into the mission with the separation of the stage six seconds later and followed by the ignition of the HM-7B engine of the second stage on a burn of 16 minutes and 27 seconds.

The mission is targeting an orbit of 250 by 35,766 Kilometers at an inclination of 6.0 degrees. EchoStar 18 is set for separation from the Ariane 5 at T+29:20. BRIsat – riding in the lower payload berth – will be revealed 35 minutes into the flight when the Sylda payload adapter is jettisoned to clear the path for the spacecraft, set for release seven minutes later.