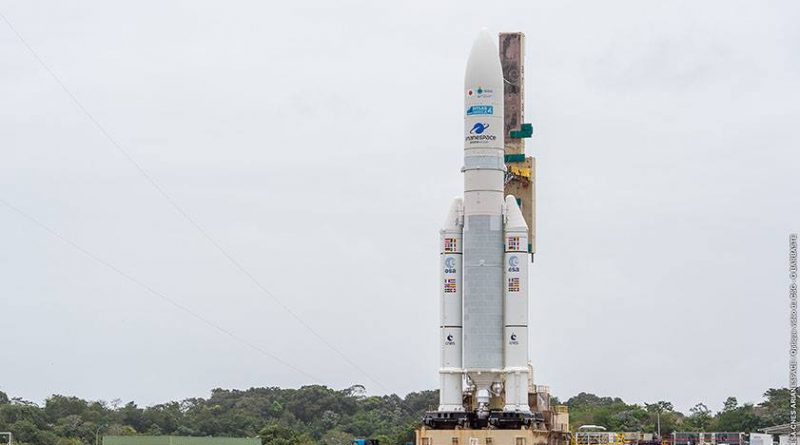 Europe’s Ariane 5 rocket stands ready for its comeback mission a little over two months after taking a wrong turn and leaving a pair of communications satellites in a seriously-deficient orbit. Cleared to return to action via more stringent quality control checks, Ariane 5 is targeting liftoff on Thursday during a 50-minute window opening at 21:34 UTC with the Superbird-8/DSN-1 dual-use satellite from Japan and the HYLAS 4 high-throughput satellite for London-based Avanti Communications.

Ariane 5 last launched on January 25 on a rare Supersynchronous Transfer Mission with the SES 14 and Al Yah 3 communications satellites. For outside observers, the mission appeared to go by the book until communications with the climbing rocket were lost some nine minutes after liftoff and could not be regained for the rest of the planned 35-minute mission – sparking fears that the two satellites had been lost. Tracking stations went into search mode and successfully discovered both passengers in good health, but far off from their planned orbit.


As it transpired over the weeks after the incident, Ariane 5 lifted off with an improper value programmed into its inertial guidance system which sent the rocket into a roll maneuver immediately after liftoff and caused a 20-degree shift to the south in the rocket’s flight path.

The improper setting was the result of an unusual set of requirements for this mission that dictated a 70-degree azimuth setting instead of the usual 90 degrees that had been the norm for all recent GTO missions by the vehicle. Checks and re-checks did not reveal the error as all involved entities had gotten used to seeing the azimuth parameter as 90.

Going into a roll immediately after liftoff resulted in the rocket departing on a launch azimuth in the neighborhood of 110 degrees – taking it much closer to the city of Kourou than for a normal mission and leaving the satellites in a 21-degree inclined orbit instead of the planned orbital inclination of three degrees.

Both satellites have since taken steps to correct their orbits – a difficult endeavor as they have to rotate their orbits in order to achieve circularization over the equator to reach a Geostationary Orbit, a process that requires time and/or additional maneuvering propellants.

The all-electric SES 14 satellite was expected to suffer a lesser impact than Al Yah 3 that relies on a hybrid propulsion system combining chemical and ion thrusters. Insurance claims have been submitted for Al Yah 3 and both satellites are still several weeks from reaching their operational orbits.

An investigation into the anomalous Ariane 5 flight was conducted by Arianespace, ESA and the French Space Agency CNES, recommending a number of steps to strengthen the quality control steps involved in generating the mission-specific parameter inputs for Ariane’s navigation system.


“Recommendations to improve processes and quality control have been made. Furthermore, additional recommendations to enhance end-to-end verifications of mission-specific parameters used during the launch campaign were made,” ESA said in a statement after the investigation had presented its findings.

ESA and Arianespace were somewhat tight-lipped on the specifics of the anomaly and corrective measures and the results of a CNES-led probe into the response of flight safety to the launcher deviating from its trajectory have also not been disclosed to the public. The launch of a Soyuz rocket in March had to be delayed by three days because range-related recommendations from the VA241 inquiry were still being implemented.

The VA242 mission was originally expected in the second half of March but was pushed to a new date of April 5th without a reason for the delay being made public.

Thursday’s mission is carrying a total payload upmass of 10,260 Kilograms between the two satellites and their various adapter systems holding them in place in a stacked configuration, primarily enabled by the Sylda divider structure. Riding in the upper berth is the Superbird-8/DSN-1 satellite setting out on a dual-purpose mission delivering commercial and military communications services while HYLAS 4, affixed to the rocket’s second stage, will provide high-throughput data services as part of Avanti Communications’ satellite fleet.

Superbird-8/DSN-1 was commissioned as a dual-use satellite, outfitted with a Ku/Ka-Band payload to deliver commercial networking services while a military X-Band terminal provides encrypted communications for Japan’s armed forces under the DSN project.

DSN Corporation was instated as a joint venture between SKY Perfect JSAT, technology company NEC, telecommunications provider NTT Communications, and civil engineering company Maeda Corp. Under Japan’s first Private Finance Initiative, these companies put up private funds to realize the DSN satellite constellation and ground infrastructure that is being leased to the Japanese government through 2031 and driving in revenue for the commercial partners.

The DSN Network comprises two space segment components – DSN-1 is a hosted X-Band payload on the Superbird-8 satellite and DSN-2 is a dedicated satellite. DSN-1 had been set for launch in 2016 but encountered an overpressurization event during the transfer to the Guiana Space Center and required extensive repairs; also resulting in DSN-2 becoming operational as the first constellation member following its launch atop an H-IIA rocket.

Because of its partially military nature, no photos were released of the Mitsubishi Electric-built satellite and details on its mission are withheld from the public. The commercial part of the satellite’s payload will be re-named Superbird-B3 once in orbit and replace the B2 satellite that launched in 2000 to deliver business telecommunications services and VSAT expansion services over Japan.

HYLAS 4 weighs in at 4,050 Kilograms and employs Orbital ATK’s GEOStar-3 satellite platform that was inaugurated earlier this year as the company’s most advanced satellite bus. Outfitted with a Ka-Band payload, HYLAS 4 will deliver high-throughput broadband and networking services to markets in Europe and Africa.

The payload delivers 66 fixed Ka-Band beams positioned over Africa and Europe with a total capacity of 28 Giga-Hertz; the addition of four steerable Ka-Band beams enables supplementary coverage to be directed where it is needed within the satellite’s footprint.

HYLAS 4 switched from a late 2017 launch slot on Ariane 5 to the VA242 mission to be paired with a slightly lighter upper berth passenger in order to gain a little bit of mass itself in the form of additional propellant loaded into its tanks. This additional propellant load allowed the satellite’s orbit-raising scheme to be accelerated by eliminating 100 days of orbit topping with its electric propulsion system and so arrive on Station earlier while also saving stationkeeping propellant for a longer operational life.