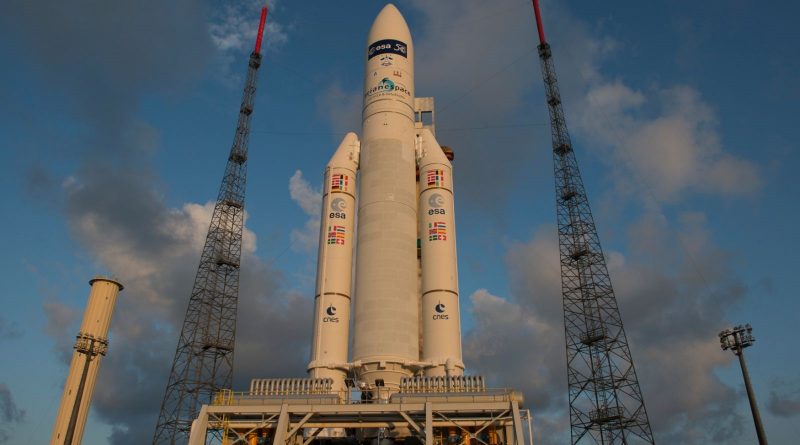 The launch of Europe’s Ariane 5 rocket with the EchoStar 18 and BRIsat communications satellites is being delayed to Friday due to an anomaly with an umbilical connection on the 55-meter tall launch vehicle. Friday’s launch window opens at 20:30 UTC and extends until 21:40 UTC.

The VA230 mission, lifting the heaviest GTO payload Ariane 5 has ever flown, was delayed from an initial launch target last Wednesday due to an issue with with a fluid connector between the cryogenic upper stage and the launch table – a condition similar to a problem encountered during the VA222 campaign in April 2015 which also pushed the launch back eight days to facilitate a replacement of the faulty component.

A repetition of the Launch Readiness Review was conducted on Tuesday and cleared the Ariane 5 for rollout on Wednesday. In a press release, Arianespace noted that a problem occurred with an umbilical on the upper portion of the launcher, requiring replacement of the faulty component.

No information was given on whether there was a connection to the issue that held up the launch last week.

Rollout to the ELA-3 launch pad is now planned for Thursday to set up for countdown operations on Friday.