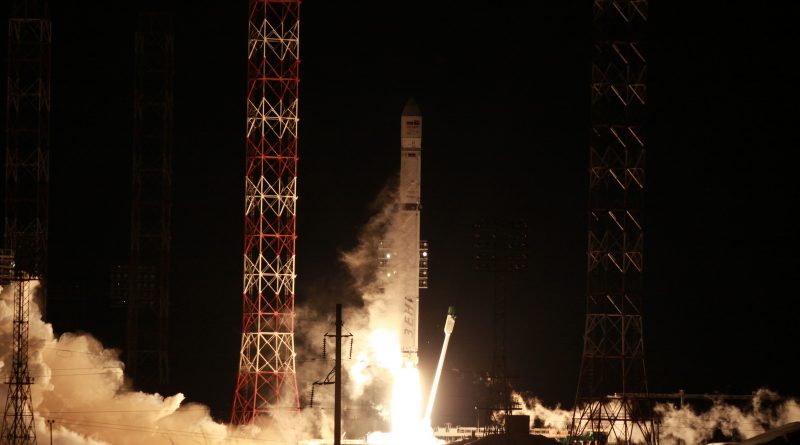 The thunder of a Zenit rocket returned to Kazakhstan’s Baikonur Cosmodrome Tuesday night for the first time in two years as the Russian-Ukrainian booster made its long-awaited return to lift Angola’s first communications satellite into Geostationary Orbit. Starting what is hoped to be its resurrection, the two-stage Zenit performed flawlessly in delivering its Fregat-SB upper stage into orbit for a nearly nine-hour ascent mission to drop the Russian-built AngoSat 1 satellite off in a drift orbit over the equator.

Tuesday’s launch marked the final orbital space launch conducted by Russia in 2017, having performed a total of 21 missions with six different vehicles, including four crewed launches to the International Space Station. In the global grand total, Russia stands in second position behind the U.S. with 29 launches, taking the leading position for the first time since 2003 – primarily due to SpaceX’s record-shattering year that has been responsible for 18 U.S. based space launches. For Russia, 2017’s total surpasses the number of launches in 2016 but remains well below the country’s average since the turn of the century.


2017 saw fourteen launches of Russia’s Soyuz workhorse: The older-generation Soyuz was in action five times with four crewed missions by the Soyuz FG rocket sending Expedition crews to the International Space Station and one mission by the Soyuz U, closing out a four-decade career back in February when delivering its final Progress cargo spacecraft into orbit.

The Soyuz 2 launch vehicle family flew 9 times this year, starting 2017 with two unusual flight assignments to Geostationary Transfer Orbit from the Guiana Space Center in South America under operation by Arianespace that decided to shift a pair of fairly lightweight satellites to the ‘Europeanized’ Soyuz to take pressure off its Ariane 5 manifest.

Russia’s only launch failure of the year occurred on the lone Soyuz mission from the new Vostochny Cosmodrome in the country’s far east that had opened for business in 2016 and was supporting its second Soyuz back on November 28 to deliver the Meteor-M 2-1 weather satellite and 18 secondary payloads. While Soyuz performed a flawless ascent onto a sub-orbital trajectory, the Fregat upper stage – tasked with lifting the satellites into five distinct orbits – succumbed to a previously undetected software bug in its guidance system that could only arise due to the unique geographical orientation of the Vostochny 1S launch pad.


The heavy-lift Proton rocket, coming off a string of failed missions over the last decade and a close call last year, returned to Baikonur after a year-long stand-still and successfully performed four flights – three for commercial operator International Launch Services and one in the interests of the Russian Ministry of Defence when lifting the first in the Blagovest high-capacity communications constellation. Rockot – on its way out after a career of close to three decades – flew only once in 2017 when deploying the Sentinel-5p remote sensing satellite for Europe’s Copernicus Program.

Rounding out Russia’s 2017 manifest was the first Zenit rocket in over two years to begin what is hoped to be the launcher’s resurrection as relations between the once-interconnected space industries of Russia and the Ukraine slowly improve after deteriorating over tensions between the two nations following Russia’s annexation of Crimea in 2014. Zenit, looking back at over 30 years of operations and 84 missions, still has an uncertain future but steps taken over the last year indicate that production may re-start in 2018 for the resumption of regular flights from the Baikonur Cosmodrome and the sea-going Odyssey Platform, now in the hands of the S7 Group, owner of S7 Airlines.

As relations between Russia and Ukraine iced over, Zenit’s production – employing Ukrainian-built stages and Russian engines & upper stages – came to a halt with hardware for two complete Zenits placed in storage at Baikonur and another vehicle at an advanced stage of production. Sea Launch – already in financial trouble due to struggles on the commercial launch market – fell apart shortly thereafter with its assets, notably the Sea Launch Commander Ship, Odyssey launch platform and Home Port processing facility in Long Beach, being taken out of operation and placed on the market for interested buyers.

A one-off deal struck in 2015 permitted the launch of one of the two complete Zenits waiting in Baikonur, lifting off in December of that year with the Russian Elektro-L No. 2 Geostationary Weather Satellite. Many feared that mission would be the last time the thunder of the most powerful liquid-fueled engine in the world roared across the Baikonur Cosmodrome as the Russian and Ukrainian space sectors further drifted apart with efforts underway on both sides to end reliance on components built by the other.


However, cautious optimism emerged in 2016 when the S7 Group announced they purchased the Sea Launch endeavor and all its assets followed by a meeting held in Moscow that October with Russian and Ukrainian space officials and all third parties interested in keeping Zenit alive. A nonbinding agreement of Russia buying up to a dozen Zenit launchers was still pending political approval and S7 initiated work to resume Zenit production but also had to clear a number of political hurdles expected to take around one and a half years.

With one finished Zenit still at Baikonur and already past its warranty, another agreement was reached to allow Ukrainian engineers to travel to Baikonur and complete refurbishment for a 2017 launch of the AngoSat 1 communications satellite that had bounced around the Russian manifest for the better part of two years after losing its initial flight opportunity on a Sea Launch mission. The departure of the Ukrainian processing team was again made a political bargaining chip by both sites – delaying the readiness of the Zenit rocket from mid-year to early December with a non-related technical fault during Fregat fueling pushing the launch another three weeks to the very end of 2017.

Weighing in at 1,647 Kilograms, AngoSat 1 is based on Energia’s Universal Satellite Platform that flew on four commercial communications satellites in 1999 and 2003, has since undergone modernization, and is now used by the Tundra missile warning satellites and Geostationary Communications craft.

AngoSat’s communications payload was built by Airbus Defence and Space and comprises 16 physical C-Band transponders and six Ku-Band transponders, equivalent to forty-four 36 MHz transponders. Outfitted with eight Stationary Plasma Thrusters, the satellite will keep a position of 14 degrees East in Geostationary Orbit for a mission hoped to last 15 to 18 years, starting after an eight-year road to launch.

Flying in its 3SLBF configuration on Tuesday (also known by the simpler 3F designation), Zenit made use of the 43-meter tall Zenit-2 stack with a Fregat-SB upper stage sitting atop, capable of lifting nearly two metric tons straight into Geostationary Orbit.

Pushing toward a nighttime liftoff in the early hours on Wednesday, local time, Zenit headed into tanking at T-2 hours and 30 minutes when 296 metric tons of -183°C Liquid Oxygen oxidizer began flowing into the two-stage stack followed one hour later by 113 metric tons of rocket-grade Kerosene. The Transporter-Erector that had staid connected to Zenit after Sunday’s rollout to the pad pulled away from the rocket at T-15 minutes to retreat to a safe distance while Zenit went through final pressurization and took over control of the countdown.

Ten seconds before launch, Zenit fired up its BIM hydraulic generator, delivering the power needed to move the massive nozzles of the four-meter tall RD-171M engine and the vehicle went into inertial guidance mode half a second before the ignition command was issued to the engine at T-3.5 seconds. The typical green flame of Zenit’s ignition fluid erupted from the base of the rocket as the RD-171M rumbled to life, lifting Zenit off the ground at precisely 19:00:03.435 UTC, 1 a.m. local time at the remote Kazakhstan launch site.

Gimbaling the four nozzles of its main engine, Zenit balanced in a vertical position as it climbed away from Site 45/1 with a thrust-to-weight ratio of 1.7 – making for a quick initial ascent. Within a few seconds of lifting off, Zenit entered its pitch and roll maneuver to attain its planned launch azimuth to the north east, aiming for an initial orbital inclination of 51.4 degrees.

As Zenit approached two minutes into the flight, the RD-171M started a gradual throttle-back from its maximum vacuum thrust of 804 metric-ton-force down to its 74% level to limit acceleration to 4Gs as the first stage approached the end of its burn, consuming a total of 327 metric tons of LOX and Kerosene.

The 10.4-meter long payload fairing split open five minutes and 22 seconds after launch when the vehicle had departed the dense layers of Earth’s atmosphere and the AngoSat spacecraft could no longer be harmed by aerodynamic forces.

Real time calls by the launch team in Baikonur indicated Zenit was flying true and level with nominal performance noted during operation of both stages.

The second stage shut down its main engine seven minutes and 10 seconds into the flight while the RD-8 kept firing for another 85 seconds to finish pushing the stack into orbit with 80 metric tons of thrust. Separation of the Fregat SB upper stage into a slightly elliptical Low Earth Parking Orbit occurred eight minutes and 37 seconds after launch, marking the successful conclusion of Zenit’s involvement in the night’s climb into orbit and the start of a Fregat ascent mission lasting nearly nine hours and targeting a direct insertion into Geostationary Drift Orbit nearly 36,000 Kilometers above the equator.

Fregat SB is the largest member of the Fregat family, adding a torus-shaped Auxiliary Propellant Tank to the baseline Fregat version flying on the Soyuz to enable it to carry heavier payloads into orbit. The SB version is 2.4 meters tall and 3.9 meters in diameter with a launch mass of 11,780 Kilograms, powered by a single S5.92 main engine that operates at 1.5 or 2.0 metric tons of thrust.

Spacecraft separation occurred eight hours and 55 minutes into the night’s flight, after a three-burn mission by the Fregat-SB upper stage, designed to lift AngoSat-1 into a drift orbit near GEO since the satellite lacks chemical propulsion for large orbital changes. Per the planned ascent profile, Fregat-SB began its mission with a coast phase before firing up 74 minutes and 54 seconds into the flight on a seven-minute and 55-second burn that emptied out the JTB Propellant Tank and lift the orbit’s high point to over 4,000 Kilometers in altitude.

The first burn occured around the orbit’s first ascending node, centering the equator so that the high point of the resulting orbit was placed over the equator on the opposite side of the planet. To reach a Geostationary Transfer Orbit, Fregat-SB had to coast for nearly a full orbit, so that its second burn could center the next perigee, starting three hours 23 minutes and 53 seconds into the flight and lasting 11 minutes and eight seconds to raise the apogee to match Geostationary altitude.

Next was the mission’s longest coast phase to allow Fregat-SB to climb all the way to the high point of the orbit where an out-of-plane impulse could bring up the perigee to circularize the orbit and reduce its inclination to as close to zero as possible. Fregat’s third and final burn was expected to start eight hours and 44 minutes after launch and take eight minutes and 41 seconds to reach the desired drift orbit over the equator.

Launch success was confirmed by Roscosmos after spacecraft separation at 3:54 UTC on Wednesday, December 27.