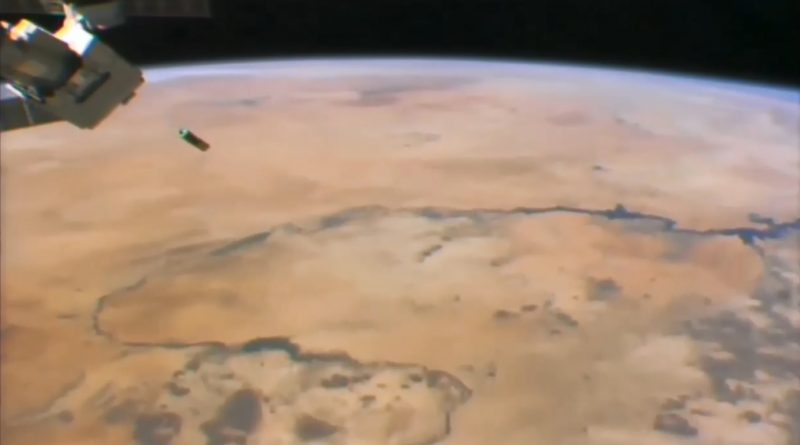 Five small CubeSats were deployed from the International Space Station on Monday via NanoRacks’ commercial deployment mechanism that allows ISS to serve as an orbital launch pad for educational and commercial satellite missions of short duration.

Operations started in the early hours on Monday when the small airlock on the Japanese Kibo module was opened and the NanoRacks CubeSat Deployer was moved to the outside, grappled by the Japanese robotic arm that then moved the deployer to the proper direction for safe satellite release from ISS without risk of re-contact. The first deployment of the day occurred at 10:25:01 UTC when two Lemur-2 satellites were sent on their way for operator Spire Global, joining a constellation of CubeSats delivering meteorological and ship-tracking data. Another pair of Lemurs followed at 15:05:00 UTC and the final deployment of the day was TechEdSat5, operated by San Jose State University and NASA’s Ames Research Center for research into passive, targeted sample return capabilities.

All five satellites deployed on Monday were flown to ISS aboard the HTV-6 cargo spacecraft last December along with a group of Japanese CubeSats that were sent on their way in deployment cycles in December and January. The next batch of CubeSats headed to the Space Station is set for liftoff on March 20 (UTC) aboard the Cygnus OA-7 cargo craft that will deliver more than two dozen CubeSats to ISS belonging to the QB50 Project.

Spire, formerly NanoSatisfi, inaugurated the Lemur project in 2014 with the launch of the Lemur-1 prototype satellite atop a Soyuz Rocket. The primary purpose for that mission was to demonstrate the satellite platform and support systems, not the operational payloads. In place of the meteo & ship-tracking equipment, Lemur-1 featured a pair of Earth-observation payloads, a medium-resolution color camera and a low-resolution infrared imaging system.

Lemur-2 was inaugurated in 2015 with the launch of four satellites atop an Indian PSLV, introducing the STRATOS and SENSE instruments. Over the course of the program, Spire plans to implement incremental improvements of the satellites and add more sensors. The next generation of Lemurs, debuting around 2018, will feature an ADS-B terminal for tracking of aircraft on a global scale.

The goal of the Lemur project is to establish a constellation of small, inexpensive satellites in operation for a number of purposes such as Earth observation, maritime monitoring, communications, meteorology and science.

The Lemur-2 satellites, each weighing 4.6kg & complying with the 3U CubeSat form, carry two different payloads, SENSE, dedicated to maritime monitoring, and STRATOS for atmospheric measurements.

These signals can be transmitted from ship-to-ship and ship-to-shore to allow the monitoring of a local area, but deploying space-based AIS terminals allows a broad coverage and data relay to ground stations for monitoring of large sea areas. However, due to the large footprint of satellites, overlapping and signal collisions become a problem, especially for frequented traffic routes, requiring a steady improvement in reception technology to separate the different signals.

STRATOS makes use of GPS occultation measurements to determine temperature, pressure and humidity profiles of Earth’s atmosphere for application in operational meteorology.

The instrument consists of GPS receivers to be able to track the signals of several MEO satellites and measure the time delay and bend angle of signals that travel through the atmosphere located in the line of sight of the two spacecraft. These phase delay measurements due to refraction by the atmosphere can be made from the satellite altitude to very close to the surface leading to precise information on the properties of the atmosphere at an accurate vertical resolution.