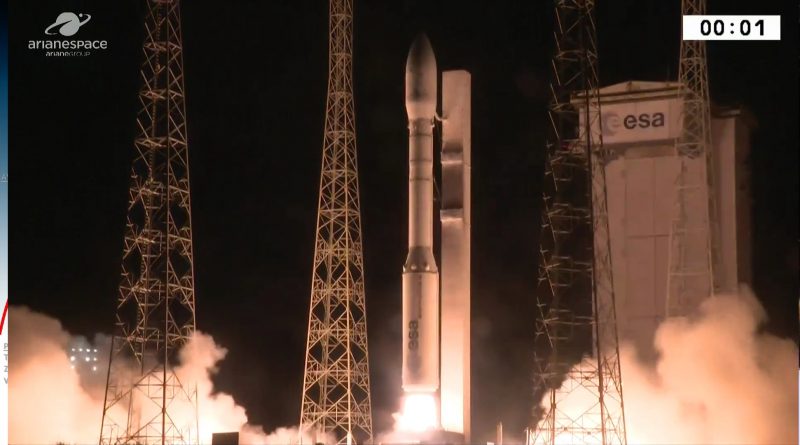 The tenth Vega rocket blasted off from French Guiana Tuesday night, lighting up the edge of the Amazon before swinging to the north to dispatch a pair of Israeli-built satellites into two different orbits via a complex multi-burn mission by the launcher’s upper stage.

The 30-meter tall Vega leapt off its launch pad at precisely 1:58:33 UTC on Wednesday, riding on pillars of fire and smoke as it shot up under the power of its massive solid-fueled first stage. Aiming for a polar orbit, Vega turned straight north and fired its three solid-fueled stages in close succession before handing off to the AVUM upper stage that first fired for six minutes to reach a preliminary orbit to begin a deliberate orbital ballet to dispatch its payloads – requiring a total of five firings of AVUM’s main engine.

Hauling a total payload mass of 990 Kilograms, AVUM re-started after coasting for a third of an orbit to inject the first passenger into a 450-Kilometer orbit. OPTSAT-3000 was sent on its way 42 minutes into the flight, starting a mission operated by the Italian Defence Ministry to collect high-resolution reconnaissance imagery.


With the first satellite on its way, AVUM shed the Vespa adapter to reveal the second passenger of this mission, the French-Israeli VENµS that required AVUM to make two more firings to reach the craft’s desired 720-Kilometer orbit for separation 97 minutes after liftoff. AVUM was then to re-light a fifth time to remove itself from orbit.

Wednesday’s mission was the tenth flight of the Vega rocket since its inauguration in 2012 as the light-lifter in Arianespace’s line of launch vehicles that also includes the ‘Europeanized’ version of the Russian Soyuz to tackle medium-lift missions while the Ariane 5 workhorse handles the heavy-lifting. It was the eighth Arianespace mission in 2017 – two Vegas, two Soyuz flights to Geostationary Transfer Orbit and four dual-payload deliveries by Ariane 5.

Wednesday’s flight, in a sense, was an Ariane-like delivery for Vega – featuring a stack of two satellites with a larger passenger riding in the upper slot and the smaller of the two in the lower berth underneath an adapter. The 368kg OPTSAT-3000 took the upper position on Wednesday, standing 3.35 meters tall, while the 264kg VENµS was only revealed after OPTSAT departed the vehicle when the top portion of the Vespa adapter separated.


OPTSAT-3000 was ordered by the Italian Ministry of Defence in a deal contingent on Israel’s purchase of Italian training aircraft. The satellite was manufactured by Israel Aerospace Industries based on the export version of its OPSAT-3000 satellite platform, coupled with a high-resolution imaging payload known as Jupiter that features a 70-centimeter telescope and panchromatic & multi-band detector units.

Black-and-white imagery delivered by the satellite will have a ground resolution of 0.5 meters while color imagery will reach a resolution of two meters and even better with PAN-sharpening possible because Jupiter can capture panchromatic and multi-band imagery at the same time, covering a ground swath of 15 Kilometers.

The $182 million OPTSAT-3000 has a span of 4.6 meters once its two solar arrays are deployed and the craft is outfitted with an agile pointing system that permits the satellite to capture images at off-nadir angles up to 30 degrees and quickly slew from one target to the next, allowing several ground sites to be imaged with a single pass.

The smaller of the two satellites, VENµS, sets out on a two-part mission starting with a two-and-a-half-year science mission using a Super-Spectral Imager followed by a technology demonstration mission involving a Hall Effect Thruster for a major orbit change and drag-free flight exercise.

VENµS had a long road to the launch pad and is the result of a collaboration between the French and Israeli Space Agencies with the Israeli side tasked with the manufacture of the satellite & its instruments as well as the mission control-related ground segment while the French side contributed technical assistance and will handle the science-related part of the mission.

The VENµS Super Spectral Camera (VSSC) captures images in 12 spectral bands, featuring a 25-centimeter telescope feeding four focal plane assemblies that host a dozen line detectors to collect imagery across a 27.5-Kilometer ground swath at a ground resolution of 5 meters. Superspectral imagery collected by the satellite will be used for ecosystem monitoring, capturing imagery of 50 sites that are representative of the world’s inland and coastal ecosystems, providing information on vegetation cover and health and helping in the development for new automated extraction methods to turn satellite data into biosystem parameters.


Data from the mission will also be useful for tracing the water and carbon cycles and further the current understand of the interface between land masses and the atmosphere.

The second part of the VENµS mission will be focused on IHET, the Israeli Hall Effect Thruster – a 15-millinewton ion thruster developed by Israeli company Rafael for use on satellites requiring frequent orbital changes or drag compensation. Two IHET units are installed on VENµS and will be used to reduce the craft’s orbit from 720 to 410 Kilometers over the course of around half a year followed by one year of drag compensation at the lower altitude to accumulate well over 1,000 operating hours on the thrusters. VSSC will be able to deliver an image resolution of three meters, continuing limited imaging operations once the satellite enters the lower Sun Synchronous Orbit.

Vega’s nighttime liftoff was preceded by a nine-hour long countdown operation that ran very smoothly, in large part due to Vega’s overall design philosophy opting for a simple solid-fueled launch vehicle – avoiding overly complex systems to establish a low-cost system for launching commercial and government satellites into Low Earth Orbit. Simplicity is achieved by using a stack of three solid-fueled stages topped by a liquid-fueled Attitude and Vernier Module which gives the vehicle precise injection and multi-orbit mission capability.

Overall, the Vega launcher stands 29.9 meters tall and weighs 137,000 Kilograms at liftoff, not using any large liquid-fueled stages which eliminates any dynamic operations such as propellant loading from the rocket’s countdown.

Checkouts of the rocket’s Multi Function Unit came up clean and weather was predicted to be favorable, allowing teams to roll back the Mobile Service Gantry three hours before the instantaneous launch opportunity. Vega finished pre-launch checks and was placed in its launch configuration at T-50 minutes to prepare for the Automated Countdown Sequence picking up at T-4 minutes to put in motion the final preparatory steps for liftoff – notably the transfer to internal power, the final check of the guidance system and the handover of control to the rocket’s computers.

Ignition of the P80 first stage marked the point of no return for Vega, catapulting itself off the launch pad with a thrust of 280 metric-ton-force, creating a thrust to weight ratio in excess of two and making for a fast departure. Vega lit up the night skies over the Guiana Space Center, ascending vertically for a handful of seconds before pitching and rolling onto a departure course to the north, heading out over the Atlantic to reach a high-inclination orbit for the delivery of its payloads.

Burning 820 Kilograms of solid propellant every second, P80 accelerated Vega beyond the speed of sound within half a minute, cutting through the dense layers of the atmosphere. Thrust on the P80 began tailing off one minute and 50 seconds into the flight, having consumed 88 metric tons of propellant to accelerate the vehicle to a speed of 1.7 Kilometers per second.

The 11.2-meter long first stage dropped away one minute and 56 seconds after liftoff at an altitude of 59 Kilometers and the 122 metric-ton-force Zefiro-23 second stage immediately fired up on its 77-second burn to continue boosting the vehicle out of the atmosphere. Burning through 24 metric tons of propellant, the 8.4-meter long Z23 accelerated Vega to a speed of 3.8 Kilometers per second, separating from the vehicle three minutes and 40 seconds after liftoff when Vega had reached an altitude of over 200 Kilometers.

The two lower stages exhibited a slight overperformance which was corrected via energy management on the third stage and trajectory adjustments by the AVUM upper stage that was able to shorten its first burn by several seconds as a result.

The third stage, designated Zefiro-9, ignited after a short delay, four minutes and three seconds into the flight followed just five seconds later by the separation of the protective payload fairing. This was Vega’s first flight with a fairing using out-of-autoclave carbon composite technology which was recently inaugurated on the Ariane 5, permitting a significant reduction in production time and cost for the fairing halves.

Generating a peak thrust of 32 metric ton-force, the third stage fired for two minutes and raised Vega’s speed to nearly match orbital velocity. Burnout on the 4.1-meter third stage was followed by a brief passive coast to ensure any residual thrust had tailed off before shedding the spent stage. At separation, six minutes and 42 seconds into the flight, Vega had reached an altitude of 235 Kilometers, traveling nearly 7.6 Kilometers per second.

Taking over control of the flight, AVUM was first tasked with lifting the stack into orbit – starting out with a stabilization of its orientation and a propellant settling maneuver before lighting up the 250 Kilogram-force Main Engine Assembly (RD-869). The burn ran just over six minutes and corrected for injection errors by the lower stages, parking the stack in a slightly elliptical orbit peaking at 455 Kilometers in altitude.

AVUM then coasted for 26.5 minutes to climb towards the high point of the orbit for a one-minute and 25-second burn of the MEA to inject the stack into a circular orbit at 450 Kilometers, inclined 97 degrees. This set the stage for the spring-loaded separation of the OPTSAT-3000 satellite just shy of T+43 minutes, heading off on a mission of at least six years filling a reconnaissance data gap for the Italian defence authorities.

With the first payload on its way, AVUM conducted a re-orientation before jettisoning the Vespa adapter 52 minutes after launch to reveal the VENµS satellite which planned to start out in a higher orbit than OPTSAT – requiring another pair of engine burns by AVUM. The upper stage re-lit 53 minutes after launch and fired for just under one minute to lift the high point of the orbit to 720 Kilometers ahead of half a lap of coasting to set up for the circularization – a 64-second burn completed one hour and 35 minutes into the mission.

VENµS sailed off one hour and 37 minutes into the flight, entering its planned orbit at 720 Kilometers where it will spend close to three years – first going through commissioning and orbital fine-tuning as prerequisites for the 2.5-year science mission with the super spectral camera. The mission will then make its 310-Kilometer altitude reduction and continue in a drag compensation mode before the craft is brought to a purposeful re-entry.

For AVUM, the day was not over once both satellites were on their way as one more burn was left for the upper stage to remove itself from orbit – targeting a retrograde deorbit burn of 78 seconds ten minutes after VENµS separation.

Wednesday’s launch marked Vega’s tenth successful orbital delivery and will be followed by one more Vega mission later this year with an Earth observation satellite operated by Morocco. For Arianespace, the next mission on the manifest is an Ariane 5, currently targeting liftoff on September 1st with the Intelsat 37e and BSat-4 communications satellites headed to Geostationary Transfer Orbit.