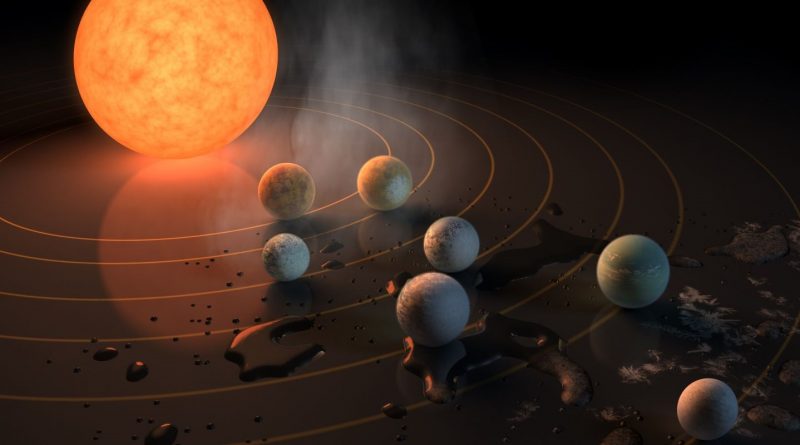 Astronomers discovered a treasure trove of seven Earth-sized planets in orbit around a single star some 39 Light Years from Earth, NASA announced on Wednesday.

Three of the planets in the TRAPPIST-1 system are firmly placed in the habitable zone around the cool dwarf star where liquid water – a key ingredient for life as we know it on Earth can exist, making this recent discovery particularly interesting.

While three of the TRAPPIST-1 planets reside within the so-called ‘Goldilocks’ zone, all seven could theoretically have liquid water under the right atmospheric conditions, making this the largest population of potentially habitable planets in orbit around a single star.

“This discovery could be a significant piece in the puzzle of finding habitable environments, places that are conducive to life,” said Thomas Zurbuchen, associate administrator of NASA’s Science Mission Directorate. “Answering the question ‘are we alone’ is a top science priority and finding so many planets like these for the first time in the habitable zone is a remarkable step forward toward that goal.”


The TRAPPIST-1 system is named after The Transiting Planets and Planetesimals Small Telescope (TRAPPIST) in Chile that was used in the second half of 2015 to study the possible presence of exoplanets around this particular star in the constellation Aquarius. In May 2016, scientists announced they had found two, possibly three, exoplanets in the system. The method the Belgian-led team used is known as Transit Photometry – discerning the presence of planets in orbit around a star by detecting minute decreases in visual brightness whenever a planet transits the star’s disk, as seen by the observer.

Spitzer used its sharp infrared vision in the fall of 2016 for 500 hours of constant observation of the star. These observations confirmed the existence of the two planets and the favorable geometry between Spitzer’s orbit and the star led of the discovery of five more, increasing the number of known planets within the system to seven. Further analysis of data allowed scientists to measure the size of the seven planets and constrain mass estimates for six of them, allowing their density to be calculated which provides valuable insight into their physical makeup. Based on their densities, all of the TRAPPIST-1 planets are likely to be rocky, the outermost could be an icy world.

According to the study published in the journal Nature on Wednesday, the sizes of the inner six planets range from 0.77 to 1.13 Earth Radii and mass estimates vary between 0.41 to 1.38 Earth Masses, though the error bars on these numbers are still high and further study is required to refine the mass estimates.

TRAPPIST’s seven worlds are the first exoplanets orbiting this type of star known as an ultra-cool dwarf that does not possess sufficient mass for hydrogen fusion to be sustained. These low-mass stars represent around 15% of the total population in the stellar neighborhood of our solar system and previously developed accretion models suggested they could host a large number of Earth-like planets. The exoplanet discovery round TRAPPIST-1 seems to validate this hypothesis.

TRAPPIST-1 has a mass of only 0.08 Solar Masses and its emission spectrum shows it to be rich in metal, unusual for such a small star that would normally be expected to have less metal than the sun. Its luminosity is only 1/2500th of the sun’s.

Ultra-cool dwarfs are of particular interest for exoplanet habitability since liquid water could survive on planets orbiting very close to the star. In case of TRAPPIST-1, an M-dwarf at half the temperature of the sun, all seven planets that are currently known orbit closer to their star than Mercury orbits the sun. The innermost planet completes one revolution around the star in just 1.5 Earth Days, however, this close proximity places them in the path of intense flares that are known to be a regular phenomenon on dwarf stars, potentially stripping away the atmospheres of planets orbiting this close.

All seven planets are in mostly circular orbits and the individual planets come so close to each other that an observer on one of the planets could discern weather patterns and geology on a neighboring world.

The science team working with TRAPPIST-1 data conducted climate analysis for each of the seven planets, coming to a preliminary conclusion that the three innermost planets would likely suffer from a runaway greenhouse effect, an interplay between atmospheric opacity and surface temperature that increases the greenhouse effect until all surface water has boiled away – a similar fate was likely suffered by Venus. Planets e, f and g are likely within the star’s habitable zone while planet h is too far away and most likely a frozen world.

The planets may also be tidally locked to their host star, exposing one hemisphere to constant illumination while the other side remains in permanent shadow. This can create strong winds from the day to the night side and extreme thermal environments would limit the habitable portions of the planets to the twilight zones between the permanently illuminated and dark sides.

After the stunning discovery of seven Earth-sized planets around a relatively close star, scientists were eager to begin analyzing their potential atmospheres. The Hubble Space Telescope and other assets have begun screening some of the planets for hydrogen-dominated atmospheres that normally occur with gas planets like Jupiter and Saturn. No evidence of a hydrogen-dominated atmosphere was found for the innermost two planets, indicating they indeed are rocky in nature, though more work is needed to determine whether they have atmospheres resembling that of Earth.

TRAPPIST-1 will keep scientists busy for many years to come:

Spitzer, Hubble and the Kepler Telescope are currently on the case and will collect measurements to refine the properties of the planets with Kepler also keeping an eye out for any new additions to the already unprecedented set of Earth-sized planets. The newly discovered system will be one of the first targets for NASA’s James Webb Space Telescope that will provide the sensitivity needed to detect chemical species within an exoplanet’s atmosphere (including bio-signatures) and deliver precise readings on temperatures and pressures on a planetary surface, two critical factors for habitability.

The discovery of potentially life-bearing worlds around a dwarf star will also energize future efforts of searching for similar systems around other dwarfs.