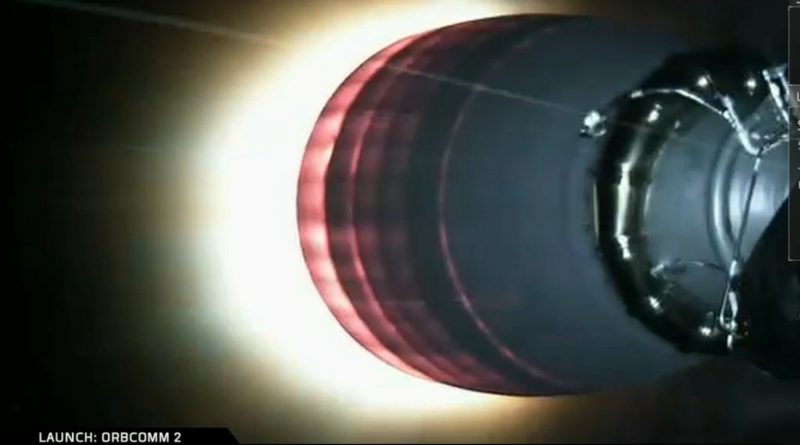 Monday’s launch of SpaceX’s Falcon 9 rocket made a successful orbital delivery of a group of 11 small satellites to join Orbcomm’s Machine-to-Machine communications fleet. Aside from achieving a historic first in landing the rocket’s first stage at Cape Canaveral just minutes after liftoff, the return to flight mission and premiere of the Falcon 9 FT version also accomplished a re-start demonstration of its second stage – considered just as important as the first stage landing, given its criticality for the near-term in SpaceX’s bread and butter business of launching Geostationary Communications Satellites.

Falcon 9 departed Space Launch Complex 40 at 8:29p.m. local time and thundered into the night skies over Florida, heading to the north-east for a trip across the Atlantic Ocean. The first stage burned for nearly two and a half minutes before handing off to the second stage in a clean separation, assisted by a new separation system inaugurating an additional pusher mechanism. While the first stage embarked on its adventurous landing maneuver, the second stage ignited its MVac engine, an upgrade to the previously used engine running at an uprated thrust setting and hosting an extended nozzle to optimize its performance when operating in the vacuum of space.


The second stage fired for seven minutes, delivering the remaining 6km/s of delta-v after the first stage accelerated the stack to five times the speed of sound. Revealed at the T+3-minute mark when the protective payload fairing dropped away, the eleven OG2 satellites were aiming for an insertion orbit of 620 by 660 Kilometers at an inclination of 47°. Separation was accomplished in five pairs of satellites followed by the release of a single satellite – completed in sequential fashion starting 14.5 minutes into the flight.

Orbcomm CEO Marc Eisenberg confirmed that all 11 satellites checked in with ground stations after their successful deployment and transitioned to an operational flight mode by Tuesday morning, extending their solar arrays and communications antennas. The Joint Space Operations provided the following orbital parameters for the 11 OG2 satellites:

A standard GTO delivery from Cape Canaveral calls for the second stage firing twice – the first burn placing the stack into a Low Earth Parking Orbit, to be followed by a coast so that the second burn can raise the apogee of the orbit to geostationary or supersynchronous altitude, positioned above the equator.

Because of the changes made to the second stage and its MVac engine in the transition to the Falcon 9 FT, SpaceX was seeking a reduction of risk for the first GTO mission and therefore decided to shuffle missions. Originally, the SES 9 mission for SES World Skies was first on the firing line but was switched with the OG2 mission to Low Earth Orbit – leaving enough propellant margin to land the first stage and conduct a demonstration of the second stage re-start.

This re-start test was highly desired to verify the that the MVac engine is capable of igniting after coasting in orbit for several minutes. The first attempt of an in-space re-start of the Merlin 1D back in September 2013 had not been successful when its TEA-TEB igniter fluid lines froze due to exposure to supercold oxygen. The fix in this case was easy but showcased the importance of risk-reduction in the form of in-space hardware testing and SpaceX decided to follow this philosophy before launching the modified second stage on a critical multi-burn mission.

SpaceX confirmed the second stage re-light was a success and the absence of the second stage in orbital data logs confirms it was deorbited shortly after launch. The 0.4km/s retrograde burn was to set the stage up for a targeted re-entry over the Indian Ocean, putting a close to a successful flight and clearing the way for the launch of SES 9, currently expected some time in January.

For the 11 OG2 satellites, the coming weeks will be filled with checkouts and orbital adjustments to establish the operational 17-satellite constellation as the latest additions join six satellites launched last year atop a Falcon 9 v1.1 rocket.

Each of the small satellites weighs 172 Kilograms and measures 1 by 1 by 0.5 meters in its stowed configuration. Utilizing Sierra Nevada’s SN-100A satellite platform, the spacecraft are equipped with a Hydrazine propulsion system, a single deployable solar array and a VHF communications terminal to receive and transmit data packets to and from ground terminals. The VHF communications payload features a Helical Quadrifilar antenna with an 8-meter long boom that is 25 centimeters in diameter. Orbcomm satellites operate at frequencies of 137 to 153 MHz.

Orbcomm provides a wide range of machine-to-machine M2M communication services for all branches of industry and government, providing relay of small data packets at low latencies from mobile transmitters to ground-based terminals. Examples of Orbcomm applications include the transportation industry specifically trailer and container tracking, cold chain monitoring and cargo security – on a global scale.