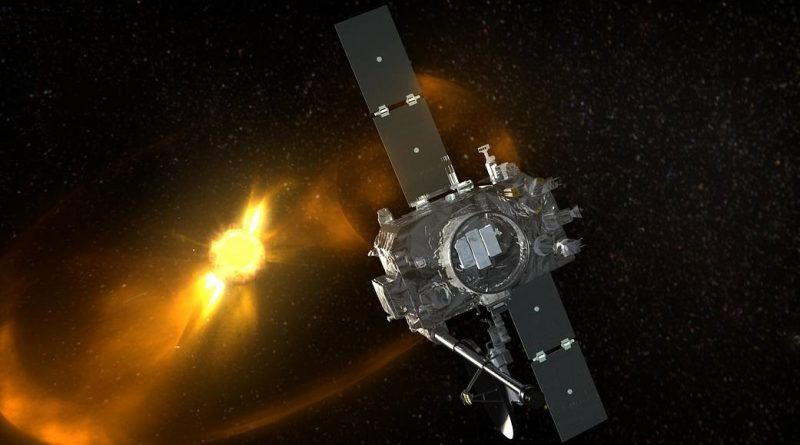 NASA re-established contact with the STEREO-B sun-watching satellite on Sunday almost two years after the spacecraft had fallen silent during what was expected to be a routine test run.

STEREO – the Solar Terrestrial Relations Observatory – is a solar observation mission comprised of a pair of nearly identical 620-Kilogram satellites launched in 2006 atop a Delta II rocket. The mission has been set up so that one of the spacecraft entered an orbit around the sun that is inside Earth’s orbit (STEREO Ahead or STEREO-A) while the other spacecraft was ejected into the opposite direction to enter a heliocentric orbit outside that of Earth (STEREO Behind, STEREO-B).

The primary goal of the mission was to deliver stereoscopic images of the sun and deliver data on solar activity on the side of the sun not currently facing Earth. This data helps in the forecasting of adverse effects of solar activity on communications, power grids and satellites. Each spacecraft is outfitted with a camera suite, particle measurement devices, plasma detectors and radio wave sensors.


The mission’s objectives were fulfilled during a two-year primary mission, but NASA decided to keep the STEREO spacecraft in operation for as long as possible given the operational benefits of keeping track of solar activity.

Both spacecraft continued operating through solar storms until the mission approached what is known as conjunction – a period when the sun is located between the spacecraft and Earth, creating radio interference that makes it impossible to communicate with the spacecraft. In preparation for this period, the spacecraft went through tests of their systems and operational modes to be used during conjunction. These safe mode and hard command loss timer tests were successfully carried out on the Ahead spacecraft but when the Behind spacecraft was put to the test, a serious anomaly occurred.

The Command Loss Timer – intended to automatically reset the spacecraft if no commands arrive from Earth in 72 hours – was intentionally fired on October 1, 2014. This was to ensure the satellite would re-start every three days during the three-month conjunction, essentially ensuring no lock-ups could harm the spacecraft over the lengthy period with no communications.

Within minutes of the intentional re-start, an initial weak telecomm signal from the spacecraft faded away. STEREO-B was not heard from since the test.

Based on the data captured from the weak signals after the test, the team pieced together a probable scenario that transpired aboard the spacecraft.

According to the data, STEREO-B failed to acquire attitude information with its Star Trackers which is not uncommon, but the satellite also encountered a problem with the backup system when one of the ring laser gyros within the Inertial Measurement Unit failed. From this point, the spacecraft could no longer point its antenna toward Earth, explaining the loss of signal.

The big unknown was whether STEREO-B recognized the faulty IMU and switched to solar pointing via sun sensor data. In the event this transition had not taken place, STEREO-B would have spun up trying to correct a roll bias that was not actually present.

The mission team spent several weeks sending commands in the blind hoping that STEREO-B would receive inputs from Earth to partially restore its functions. These attempts did not pay off and the mission team reduced efforts to a monthly check whether signals from the spacecraft were present, continuing to instruct the spacecraft to power up its communications equipment.

On Sunday, at 22:27 UTC, the Deep Space Network established a lock onto a carrier signal coming from STEREO-B – representing the first sign of life from the faraway spacecraft in 22 months. The signal was monitored for several hours and revealed that the spacecraft was apparently spinning at two revolutions per minute and was using its low gain antenna to transmit the emergency carrier signal.

STEREO-B was acquired for a second pass on Monday during a three-hour window.

All the downlink passes only captured the carrier frequency of the spacecraft that does not include any data. The spacecraft’s avionics are likely powered off to maintain battery state of charge.

The mission team expects a recovery – if possible at all – to take an extended period of time to slowly transition the spacecraft to a positive power balance, assess the health of the subsystems, transition to three-axis stabilization and finally warm the spacecraft’s instruments to re-start mission operations.

With good news from STEREO-B, teams are hopeful to regain their second spacecraft to continue in the extended mission of the STEREO project. The STEREO-A spacecraft continues to function well, approaching the ten-year mark in a mission envisioned to last three.