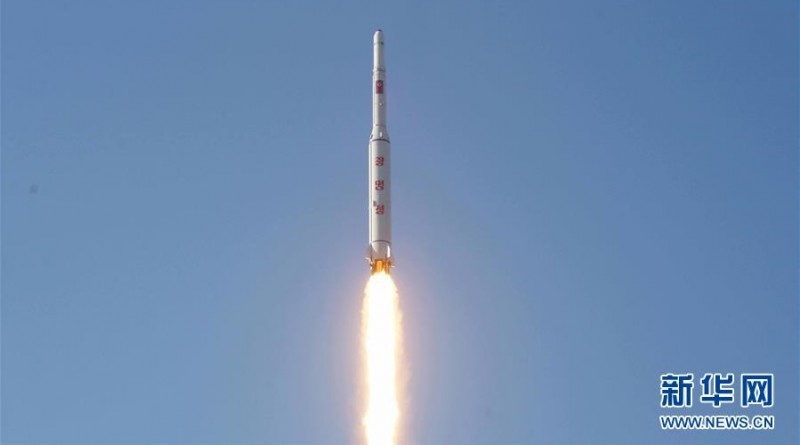 North Korea successfully launched a satellite into orbit on Sunday, achieving the country’s second successful orbital launch following up on Pyongyang’s first satellite launched in December 2012. However, North Korea’s launch vehicle technology might be ahead of its satellite technology as the Kwangmyongsong-4 satellite has yet to show activity in orbit and is reported to be tumbling.

The three-stage rocket, officially identified as Kwangmyongsong, but closely resembling the Unha-3 launch vehicle launched twice in 2012, lifted off from the Sohae Satellite Launching Station at 0:30 UTC on Sunday. Powering uphill with a thrust of around 120 metric ton-force, the rocket swung to the south to ascend towards orbit from its west coast launch pad, overflying the Yellow Sea between the Chinese and South Korean coast lines.


The Unha rocket was tracked independently by Japan, South Korea, China and the United States as it fired its three stages to reach orbit – dropping its lower stages and payload fairing in the identified safety zones in the Ocean. The Kwangmyongsong-4 satellite was released nine minutes and 46 seconds after launch, reaching an orbit of 465 by 501 Kilometers at an inclination of 97.53 degrees.

No details on the satellite were available immediately after launch, though South Korean press reports claimed the spacecraft had a mass of 150 to 200 Kilograms, heavier than the 100kg Kwangmyongsong-3-2 satellite launched in 2012. Video footage published by North Korea’s Central Television channel showed replicas of the KMS-4 satellite, comprised of a box structure with two fold-out solar panels and a central body-mounted solar panel. Also, the satellite appeared to carry a pair of  cameras to fulfill its primary purpose of collecting video and still imagery of the North Korean territory for environmental assessments and agricultural planning.

The spacecraft being heavier than its predecessor may provide an explanation for its orbit that is over 80 Kilometers lower on apogee and 33km on perigee than the orbit of Kwangmyongsong-3-2. However, analysis of orbital data conducted by Robert Christy, shows the argument of perigee of the new KMS-4 satellite was offset 180° to the KMS-3-2 satellite, indicating its orbital insertion occurred at apogee which suggests a launch vehicle underperformance.

Further underlining that the achieved orbit was not on target is a drift of the Local Time Of Descending Node of over 30 seconds since launch meaning the satellite is not in a proper sun-synchronous trajectory and will eventually suffer prolonged night passes.

Conflicting reports emerged at the start of the week regarding the satellite’s status as some U.S. news outlets reported the satellite was exhibiting a tumbling motion, citing U.S. defense officials. Other reports indicated the satellite had stabilized only to be followed up again by reports of tumbling. Satellites relying on passive attitude control systems often need several days to several weeks to stabilize, therefore tumbling on KMS-4 was not yet a definitive sign of the satellite being dead.

What is a more definitive indicator of the satellite’s status is a continuing radio silence from the small spacecraft. According to information published for KMS-3-2, the satellite is outfitted with an X-Band communications system for the downlink of Earth imagery and a ~470 MHz UHF radio to transmit the “Song of General Kim Il Sung” and “Song of General Kim Jong Il” to the world.

Radio operators have been listening for signals from the satellite since its launch, but so far have come up empty handed. One complicating factor is the proximity of the North Korean satellite to the European MetOp-A weather satellite which also transmits in UHF around 465 MHz. Although MetOp is 300 Kilometers higher than KMS-4, the satellite footprints and transmission zones have been overlapping since Sunday’s launch. KMS-4 is pulling out in front of MetOp-A given its lower orbit and separation should be sufficient by Friday to ascertain whether it is KMS-4 or MetOp-A that is transmitting.

It can be assumed that the Kwangmyongsong-4 satellite is non-functional unless North Korea publishes Earth imagery acquired by the spacecraft or radio signals can be definitively attributed to the spacecraft.

Meanwhile, South Korea fished the payload fairing of the Unha-3-type launcher out of the East China Sea. The fairing was separated when the second stage of the rocket was firing and fell into the ocean, around 750 Kilometers downrange from the Sohae launch site. The South Korean Military completed a measurement of the fairing showing it to be 1.25 meters in diameter and 1.95 meters in length with a 1.1-meter cylindrical section.

For the December 2012 mission, South Korea was able to recover a large portion of the first stage tank and engine section which revealed great detail about North Korea’s rocket technology. During Sunday’s launch, the first stage disintegrated into over 270 fragments before impacting the Ocean, according to tracking data collected by South Korea. This brought forward the theory that the rocket stage was intentionally detonated to prevent any foreign governments from recovering debris.

Video released by North Korean TV shows onboard footage of the stage separation sequence with the first stage separating from the two-engine second stage followed by the jettisoning of the interstage section which broke apart in the exhaust stream of the second stage. The first stage, however, remained intact immediately after staging – adding some merit to the hypothesis of an intentional explosion, also considering the large number of fragments – favoring an explosion rather than an aerodynamic break-up.