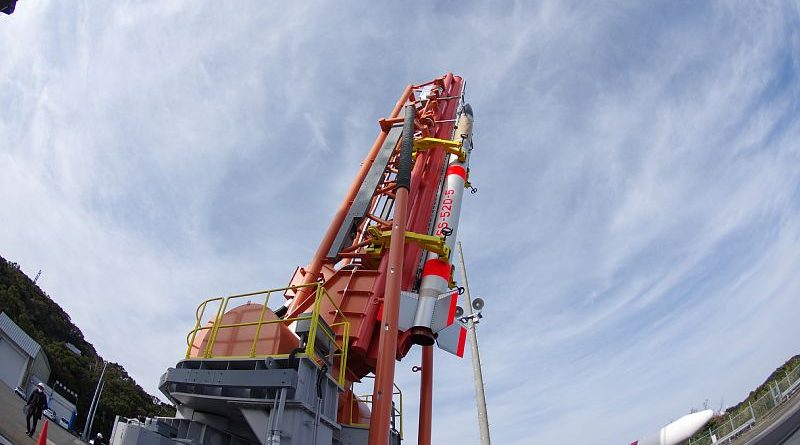 Just over a year after crashing into the Pacific Ocean on its first test flight, Japan’s SS-520 sounding-rocket-turned-orbital-launch-vehicle stands ready for another try to become the world’s smallest orbital launch vehicle, just powerful enough to lift a three-Kilogram CubeSat.

The SS-520-5 mission carries a re-flight of the rocket’s original payload and is targeting liftoff from the Uchinoura Space Center during a ten-minute launch window opening at 5:03 UTC on Saturday.

SS-520-4 started off as a one-off project of the Japan Aerospace Exploration Agency to demonstrate the feasibility of single-CubeSat launches and potentially accelerate commercial developments in this unexplored area of the market. The addition of a purpose-built third stage to the existing two-stage SS-520 sounding rocket design made the 9.54-meter tall vehicle just powerful enough to lift a triple-unit CubeSat into Low Earth Orbit – creating the world’s smallest orbital launch vehicle with a launch mass of only 2,600 Kilograms.


The one-off launch took place on January 15, 2017 when the beefed up sounding rocket shot up from its rail launcher to lift the TRICOM-1 experimental satellite into orbit in just over four minutes – one of the fastest orbital deliveries ever attempted. However, all telemetry data from the ascending rocket vanished just 20.4 seconds into the planned 31.7-second burn of the powerful first stage motor that was to lift the vehicle out of the atmosphere.

Given the nature of this experimental mission, engineers had built a checkpoint into the rocket’s flight program that required a signal from the ground to be sent to the vehicle to permit the ignition of the second stage. After the loss of data, engineering teams exercised caution and did not send the signal in the blind in order to ensure the vehicle would crash in the downrange safety area clear of any vessels. Radar tracking showed SS-520-4 reached a peak altitude of 190 Kilometers – confirming the first stage finished its planned burn with normal performance, allowing a sudden catastrophic failure to be ruled out.

The inquiry into what exactly caused the vehicle to stop communicating focused on telemetry gathered in the last 552 milliseconds before the signal was lost – showing tell-tale signs of a short circuit somewhere in the electrical system of the rocket and sending engineers looking for vulnerable areas where a short could have occurred.


Investigators did not have to look for long and quickly identified a possible weakness in a bundle of more than a dozen cables routed externally along the rocket’s second stage to provide connectivity between the batteries and control equipment on the upper stage and the boost stage.

These wires were routed in and out of the rocket through simple cut-outs on the 2nd & 3rd stage shells, essentially running in an S-turn and using a protective fiberglass tape around the cables where running through the cut-out. Ground-based testing confirmed that both the protective tape and the wire insulation material would be quickly abraded by the edge of the cut-outs in the vibration environment experienced during launch – causing a transient current in excess of 40A and knocking out the rocket’s entire electrical system.

Improvements to the cable routing design were fairly straightforward to ensure the wire bundle would be sufficiently protected to withstand the vibration environment experienced in flight. Within a month of the failed 2017 mission, JAXA announced that it had committed to a re-flight effort with an initial goal of another attempt within a year of the January setback.

Nikkei reported the re-flight effort would cost between $2.64 and $4.4 million and was likely to be split between government and private funding as there are multiple commercial companies that expressed interest in a Nano Satellite Launch Vehicle capable of placing single CubeSat missions into orbit in order to gain independence from rideshare missions which do not allow operators autonomy in their flight schedule and orbit design.

Pushing toward their goal of completing the re-flight before the end of 2017, JAXA scheduled the launch for December 24, then to the 28th to work around the planned launch of an Epsilon rocket from the same range. However, on December 26, the flight was delayed into 2018 because of a faulty sensor in a Nitrogen tank of the second stage that feeds the ram line control system setting the proper orientation for the upper stage burns.

Due to the delays with the Epsilon-3 mission and its own issues, SS-520-5 is now looking at a fairly brief window of February 3 through 12 with daily launch opportunities; however, weather is only expected to be good for Saturday before a potential multi-day cut-out. If the mission can not get off the ground during the ten-day launch period, a new window would have to be coordinated which could push the mission by several months due to fishing activities in the downrange impact zones for the first and second stage of the vehicle.

The goal of the SS-520-4/5 project is the collection of data for the development of an Ultra-Small Satellite Launch Vehicle for CubeSat or NanoSatellite missions. A number of small launch vehicles are currently in development – highlighted just recently by the successful test flight of Rocket Lab’s Electron – but even these will require CubeSat operators to deal with the constraints of rideshare missions.

Creating a vehicle capable of launching individual CubeSats or NanoSatellites could be economically viable for missions requiring specific orbital parameters or missions of opportunity that need to stick to a certain schedule. Although the current cost for launching a 3U CubeSat is around $240,000, operators are likely willing to pay more for a dedicated mission.


SS-520 finds heritage in the single-stage S-520 that flew 29 times since 1980 and adds a second stage to be able to fly payloads to higher altitudes, completing two flights in 1998 and 2000. In the orbital configuration, a solid-fueled third stage is added to the two lower SS-520 stages to achieve the necessary performance for sending around three to five Kilograms into a stable orbit.

The second stage of the rocket is the standard SS-520 second stage which features a composite motor case and measures around 1.7 meters in length, using the same diameter as the first stage.

A dynamic navigation algorithm kicks in at T+2 minutes and 37 seconds to measure the current state of the vehicle and calculate the optimized ignition time for the second stage – provided clearance is given from the ground after engineering teams have verified good performance by the 1st stage to permit the vehicle to head further downrange.

The second stage burn begins around three minutes into the flight when the vehicle will be 179 Kilometers in altitude, its speed having decreased to 1.0km/s. Stage 2 employs spin stabilization and burns for 24.4 seconds, in the process consuming 325 Kilograms of solid propellant. A 5.7-liter, 230-bar Nitrogen tank on the second stage feeds four thrusters in charge of setting up the correct attitude for the second stage burn (pitching down) and then spinning the stack up for stabilization.

Stage 2 accelerates the rocket to a speed of 3.6 Kilometers per second and separates three minutes and 55 seconds into the mission, at an altitude of 188 Kilometers. The third stage in charge of orbital injection is 0.8 meters long and holds 78 Kilograms of propellant that will be consumed over the course of a 25.6-second burn starting three seconds after separation from the second stage and increasing the rocket’s speed by 4.5 Kilometers per second.

The SS-520-5 mission, like the original flight, is targeting an orbit of 180 by 1,500 Kilometers at an inclination of 31 degrees. Separation of the TRICOM-1 satellite is expected 7 minutes and 30 seconds after launch, at an altitude of 205 Kilometers and 1,751 Kilometers downrange from the Uchinoura Space Center.

TRICOM-1R has been commissioned as an identical re-flight mission of the TRICOM-1 CubeSat lost in the January 2017 mishap. Although it complies with the 3U form factor, TRICOM-1R is unlike the vast majority of CubeSats as it is not ejected from a deployment tube and instead features a base-mounted separation system interfacing with the upper stage of the launch vehicle via a central separation bolt.

TRICOM-1R was developed by the University of Tokyo and measures 11.6 by 11.6 by 34.6 centimeters in size with a mass of 3 Kilograms. The satellite uses body-mounted solar cells for power generation and operates in spin-stabilized mode. Five Earth-imaging cameras are installed on the CubeSat and a Store and Forward communications terminal can pick up data packets from a ground station and downlink it upon command from another ground station on a different part of the planet.