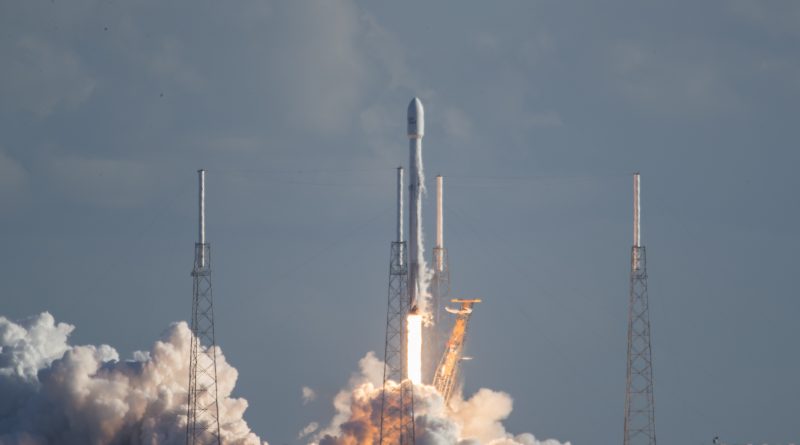 
The GovSat mission comes after the January 8 Falcon 9 launch with the ultra-secretive Zuma mission that left a lot of discussion in its wake as unconfirmed reports of a failed payload separation claimed the billion-Dollar mission had been lost. SpaceX maintained the Falcon 9 rocket performed all its tasks during the overnight ascent mission and all data pointed to a nominal launch vehicle performance – still leaving open the possibility that a custom-made payload adapter, built by spacecraft manufacturer Northrop Grumman, malfunctioned.


Wednesday’s Falcon 9 mission was tasked with lifting the SES 16 / GovSat-1 satellite into orbit for a mission of over 15 years, delivering tamper-resistant, encrypted communications for European government institutions and NATO members across Europe, Africa, the Middle East and vast stretches of the Atlantic and Indian Oceans. The X- and Ka-Band powerhouse was manufactured by Orbital ATK using the company’s GEOStar-3 satellite platform that debuted just last week on the Al Yah 3 high-throughput satellite.


Wednesday’s launch was SpaceX’s sixth mission with a previously flown first stage, the third with SES involvement after the company placed their SES 10 satellite on the very first ‘flight-proven’ Falcon 9 in March of last year followed by the launch of SES 11 in October. SES has been one of the ‘early adopters’ of the innovations SpaceX had to offer – placing trust in the California-based company in 2013 when putting SES 8 on the first Geotransfer flight of the Falcon 9 rocket and again in 2016 when SES 9 flew on the first GTO mission of the upgraded Falcon 9 Full Thrust vehicle.