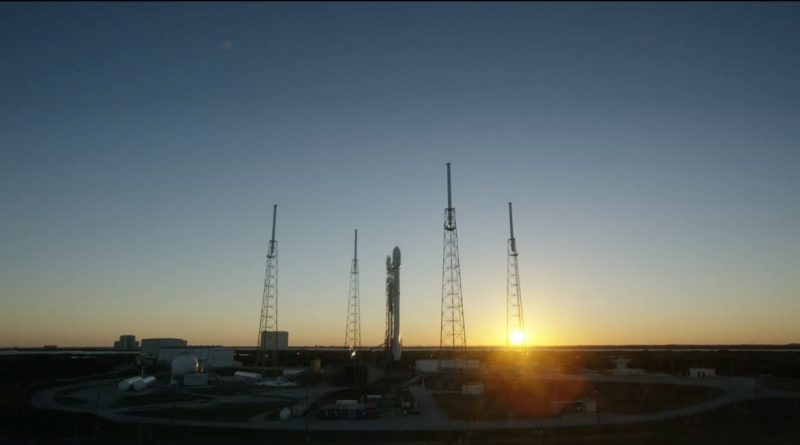 SpaceX is setting up for the company’s fifth attempt to launch a Falcon 9 rocket carrying the SES-9 communications satellite – hoping for calm winds, clear seas and cold LOX on Friday to get Falcon 9 off the ground after a series of slips.

Friday night’s window opens at 23:35 UTC and stretches to 1:06 UTC, though only a portion of this window will be usable by the 70-meter tall rocket that will again aim for the Autonomous Spaceport Drone Ship to return its first stage booster as a secondary mission objective.


The first countdown on Wednesday, February 24 was ended ahead of tanking when SpaceX determined that winds were not particularly favorable and an additional day would be needed to sufficiently chill the Liquid Oxygen to be pumped into the two-stage rocket. Because of SES-9’s weight of 5,300 Kilograms and its high-energy orbit, Falcon 9 needs all of its performance, requiring the LOX to be at the proper density to fill the stages up to flight mass, directly dependent on temperature.

The next day’s launch attempt was abandoned inside two minutes to T-0 when SpaceX had to call a scrub because the LOX loading sequence would not finish to permit a liftoff, again reflecting the tight margins of this mission beginning with the tanking sequence, timed to fill up the LOX tanks as close to launch as possible.

Another attempt Sunday night could have resulted in a successful liftoff if it had not been for a boat entering the downrange safety area, causing a 34 minute hold in the countdown.

When the boat had finally moved out of the area, the oxygen in Falcon’s tanks had warmed up and the ignition of the nine Merlin 1D engines was aborted at the last second when one engine showed a low-thrust condition likely due to a Helium bubble released from the warming LOX in the turbulent flow inside the engine piping.

Falcon 9 remained safe after its aborted ignition and SpaceX recycled for a launch attempt on Tuesday, but an extreme wind shear around ten Kilometers in altitude would not permit a safe ascent of the rocket, leading to another launch delay.

Setting up for a Friday attempt, SpaceX is looking at better conditions in the upper atmosphere with peak winds of 100 knots at an altitude of 11 Kilometers. Weather conditions on the ground are looking favorable as well with only a 10% chance of weather rule violations during the window due to slight concerns of Cumulus Clouds moving over the area during the day. After sunset, skies are expected to clear and winds will die down to create good conditions for Falcon’s post-sunset liftoff.

In case of problems on Friday, weather will remain cooperative on Saturday with calmer Upper Level Winds and only a slight concern of clouds over the launch site.

Hoping for an on-time liftoff, Falcon 9 will be loaded with around 500 metric tons of Liquid Oxygen and Rocket Propellant-1 starting half an hour prior to T-0, heading into its critical Terminal Countdown at T-10 minutes to set the stage for the ignition of the nine engines with three seconds on the countdown clock. Falcon 9 is aiming for a launch just ten minutes after sunset, flying into illumination a short time after lifting off with its engines delivering nearly 700 metric-ton-force of thrust at launch.