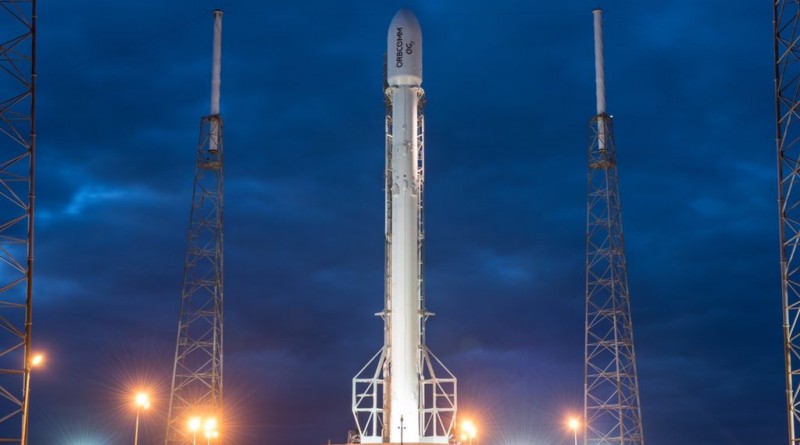 SpaceX decided to postpone the Falcon 9 Return to Flight Mission on Sunday to a new liftoff target Monday night with a one-minute window opening at 1:33 UTC on Tuesday, 8:33p.m. local time at the Florida launch site. The delay has been called to provide additional time for reviews of Friday’s Static Fire Test and to allow the super-cooled Liquid Oxygen oxidizer to be conditioned for launch.

Sunday’s target had been, even in the hours leading up to liftoff, identified as a ‘No Earlier Than’ target by SpaceX and this mission’s customer Orbcomm. Standing 70 meters tall atop its pad at SLC-40, Falcon 9 was powered up 12 hours ahead of the planned launch time to press into countdown operations, beginning with an extensive set of tests and setup operations for propellant loading.

Weather forecasters predicted almost pristine weather conditions for the one-minute launch window with a 90% chance of favorable conditions. However, SpaceX decided to delay the launch 24 hours to increase the odds of mission success. Interestingly, the reasons given for the postponement by SpaceX and Orbcomm differ.


SpaceX CEO and Chief Designer Elon Musk Tweeted “Just reviewed mission params w SpaceX team. Monte Carlo runs show tmrw night has a 10% higher chance of a good landing. Punting 24 hrs.“ This would have been the first time SpaceX delayed a launch to increase the chances of a successful landing of the booster that had been cleared by the FAA on Friday to make an onshore touchdown at Landing Complex 1  in SpaceX’s continued quest for reusability.

Orbcomm, the operator of the 11 satellites hidden under Falcon’s payload fairing, said in a statement: “Upon further review of the static fire data, SpaceX has determined that an additional day prior to launch will allow for more analysis and time to further chill the liquid oxygen in preparation for launch.“

The complexity involved in the use of densified Liquid Oxygen chilled from its boiling point at –183°C to –207°C has already caused some head-scratching over the past several days as the Static Fire Test for this mission had to be postponed on Wednesday and Thursday due to issues related to the oxidizer handling system. Friday’s Static Fire countdown also dragged on for multiple hours after Falcon 9 was loaded with around 500 metric tons of propellants. Falcon 9 aborted its countdown sequence twice due to a slow valve on the ground support system and an indication related to the upper stage throttle valve. A third attempt finally achieved a smooth count and Falcon 9 ignited its nine uprated Merlin 1D engines for a brief moment to gather performance data.

This data was scrutinized over the past two days and the Launch Readiness Review was passed, clearing the way of liftoff. Why SpaceX took a step back to analyze data from the Static Fire again has not been made public. The need for additional LOX chilling is of some interest as the temperature of the oxidizer drives the mass of effective propellant aboard the vehicle, directly affecting the amount of available performance / delta-v from each of the two stages. While LOX at a marginally higher temperature may not have come into the way of a successful orbital delivery for Orbcomm, there may have been concern that the first stage would not have sufficient propellant left over for its ambitious return.

The complexity with sub-cooled LOX is the need for a predictable and reliable propellant configuration at the moment of T-0. As LOX is loaded into the stage, it warms up and forms a two-phase system with the more dense, cold LOX at the bottom of the tank and a less-dense area of warmer LOX forming at the top of the tank. Therefore LOX has to be circulated to remove warm LOX from the tank and replenish it with LOX at the desired temperature to keep the stage at flight mass.

The 11 Orbcomm satellites do not come even close to requiring Falcon 9’s entire performance and plenty of margin for the landing of the first stage should be available, but SpaceX may be taking a path on which the first stage delivers close to its maximum performance during ascent to increase the margins for the second stage burn.

Meteorologists have issued an 80% chance of favorable weather conditions for the 01:33-01:34 UTC window on Tuesday, a 10% drop from Sunday night’s forecast. Concerns are violations of the cumulus cloud and thick cloud rules as an onshore flow brings clouds over the Space Coast. A frontal boundary will approach from the south, but is not expected to reach Cape Canaveral for the launch opportunity.