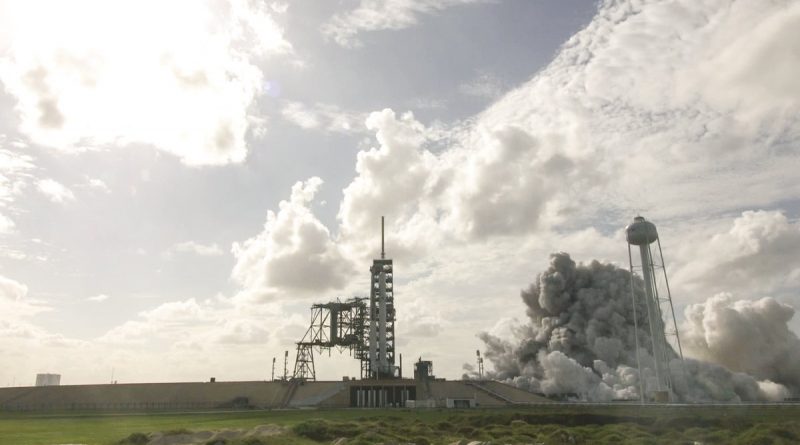 SpaceX test fired a previously flown Falcon 9 booster on its Kennedy Space Center Launch Pad on Monday in preparation for the company’s third re-use mission aiming for liftoff on Saturday. Carrying the SES-11 communications satellite, Falcon 9 will be tasked with a high-energy delivery into Geostationary Transfer Orbit, using a first stage that flew earlier this year with a Dragon cargo spacecraft.

The launch of SES-11 will mark the 14th in a record-setting year by SpaceX that so far pulverized the company’s previous best mark for the number of launches, extended SpaceX’s streak to 12 successful booster recoveries in a row and completed the first two re-flight missions of Falcon 9 first stages – demonstrating what the company had so long worked toward.


The first re-flight mission occurred on March 30 when Falcon 9 B1021 reached space for the second time, dispatching a brand new second stage and the SES-10 satellite toward orbit before making the return trip from the edge of space a second time. BulgariaSat-1 flew on the second re-use mission on June 23, marking the first flight of an orbital launch vehicle stage from both coasts of the United States after that booster had lifted a group of Iridium-NEXT satellites from Vandenberg in January.

Booster #1031 – earmarked for its second flight this weekend – first saw action on February 19 when lifting off from LC-39A at the Kennedy Space Center with the Dragon SpX-10 spacecraft, carrying 2.5 metric tons of cargo to the International Space Station. Refurbishment work on the Block 3 booster between flights included detailed inspections of the airframe & engines, the replacement of the engine section heat shield and re-attachment of four folded landing legs. SpaceX hopes to cut these steps to an absolute minimum with the inauguration of Falcon 9 Block 5 that will be fully optimized for rapid and cost-effective re-use.


SES, customer of Falcon’s first re-use mission, confirmed in August that it, based on the results of the first mission, had opted for another flight-proven booster for the SES-11 launch. Initially, SES said that SES-11 was unlikely to fly on a used booster while SES-14 and 16, also booked to fly on SpaceX, would be the more likely options for re-use missions.

The Falcon 9 for this mission, featuring a previously flown Block 3 first stage and new Block 4 second stage, rolled out to the pad at LC-39A on Monday, still missing its payload per the new procedure instated after the loss of the AMOS-6 satellite in last year’s explosion of a Falcon 9 counting down to its static fire. Gearing up for the test, Falcon 9 was placed in a vertical position and put through an initial series of checks before pushing into the automatic countdown sequence at the one-hour point, marking the start of the rapid tanking operation to fill over 500 metric tons of sub-cooled Liquid Oxygen and chilled Rocket Propellant-1 into the two-stage rocket.

Although the second stage is only a bystander in the firing test of the first stage, it also receives a full load of propellant and Helium pressurant to check out the integrity of its systems as a last end-to-end test of the entire launch vehicle to avoid any surprises on launch day. Standing autonomous on its pad, Falcon 9 was isolated from propellant supply, running on internal power and operating under control of its onboard computers when triggering the ignition of the nine Merlin 1D engines on the first stage, soaring to a collective thrust of just under 700 metric ton force.


While newly-built boosters typically perform a 3.5-second static fire for the engines to complete start-up and reach stable operating conditions, the test is slightly changed for flight-proven boosters – extending the burn to up to seven seconds to obtain additional performance data with the engines in steady operation after completing start-up. Monday’s firing – occurring around 20:30 UTC – appeared to use a five-second engine burn.

Immediately after the test, SpaceX teams went into a quick review of data to ensure the firing reached its desired duration and all required performance parameters were captured before giving the go-ahead to de-tank the rocket. Falcon 9 will return to the pad-side hangar to meet its payload later in the week while in-depth reviews of data from the test are underway to clear the way for liftoff.

The SES-11/EchoStar 105 mission has a two-hour launch window opening at 22:53 UTC on Saturday, October 7. This will mark the opening of a SpaceX double-header as another Falcon 9 is currently deep in its processing campaign at Vandenberg Air Force Base in California for an early morning liftoff on October 9 with the third group of Iridium-NEXT satellites, to be preceded by a Static Fire Test on October 5.

The next Cape Canaveral mission is looking at liftoff on October 30, also using Launch Complex 39A as Space Launch Complex 40 is still in the process of being re-activated after last year’s AMOS-6 incident. Work at SLC-40 is largely complete and engineers are currently outfitting the Transporter, Erector, Launcher (TEL) inside the SLC-40 hangar. Initially, SLC-40 had been hoped to re-open for Falcon 9 missions around September/October.

This latest delay at SLC-40 will also push the debut of the Falcon Heavy rocket as a number of modifications have to be made to the LC-39A ground system and TEL before being able to accommodate the three-core launch vehicle, requiring missions to shift back to SLC-40 first to free up LC-39A for outfitting. Speaking at the International Astronautical Congress last week, SpaceX CEO Elon Musk noted that Falcon Heavy is still hoped to fly this year; however, given the recent schedule changes, a more realistic goal would be having Falcon Heavy ready for rollout to the pad before the year is out.