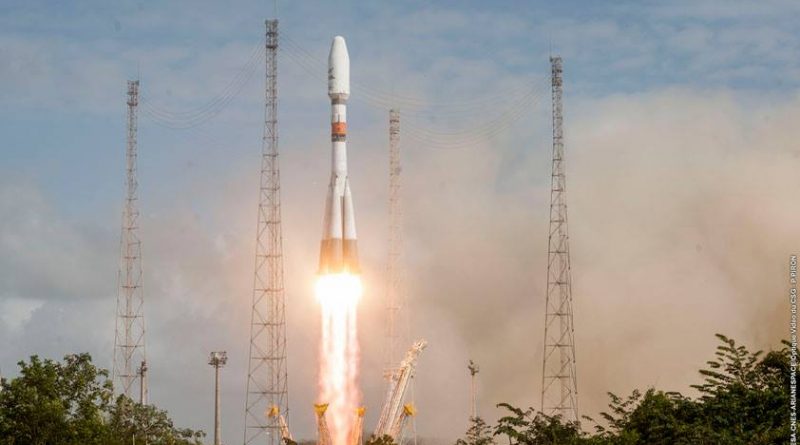 A highly sophisticated multi-use communications satellite relying on 3D printed parts and ion propulsion lifted off from French Guiana on Thursday atop a Russian-built Soyuz ST-A rocket, carrying out only its second Geostationary Transfer Mission from the French-operated space port on the edge of the Amazon jungle.

The workhorse rocket, making its 17th launch from South America, took flight at the precisely calculated time of 11:54:53 UTC to enable the venerable booster and its Fregat-M upper stage to inject the SES-15 satellite into its desired transfer orbit from where the craft will be tasked with half a year of orbit raising maneuvers to take up station over the Americas to deliver Internet and TV distribution as well as GPS augmentation for air traffic over the United States.


Thundering off powered by its core stage and four strap-on boosters, Soyuz swung on a due easterly departure – taking advantage of French Guiana’s proximity to the equator to deliver the satellite to a low-inclination orbit to save on fuel & time when maneuvering into the Geostationary Belt. The boosters dropped away after two minutes while the core stage continued firing to propel the 46-meter tall rocket out of the atmosphere before handing off to the RD-0110 engine of the third stage that fired for nearly four minutes.

Next it was Fregat’s turn, igniting on a long burn to boost the stack into an elliptical transfer orbit ahead of four and a half hours of coasting ahead of a brief, 52-second burn to achieve an elliptical injection orbit with elevated perigee altitude – catered to the requirements of the all-electric satellite.

SES-15 set sail at 17:13 UTC after a smooth flight on the Soyuz/Fregat, starting out on a mission that could last up to 18 years to deliver in-flight Internet to airline passengers, providing capacity for television broadcasters and beaming GPS augmentation signals to airplanes to give pilots and air traffic controllers more accurate navigation data.

The compact SES-15 satellite weighed in at 2,302 Kilograms, becoming the first all-electric satellite operated by Luxembourg-based telecommunication provider SES and the fifth Boeing-built satellite using only ion propulsion after a pair of dual satellite launches on SpaceX rockets in 2015 and 2016. It uses Boeing’s 702SP satellite platform optimized for all-electric propulsion used for orbit raising and stationkeeping – creating low-mass yet powerful communications satellites suitable for a range of launch vehicles and rideshare missions, opposed to the heavy GEO satellites for which propellant typically makes up nearly half the satellite’s initial mass.


The major drawback of ion propulsion is its low thrust. Although highly efficient in terms of impulse, ion thrusters only reach a fraction of a chemical engine’s thrust, meaning it takes lengthy periods of thrusting to change the satellite’s speed in a meaningful way. For SES-15, half a year is budgeted to transition the craft from its initial orbit into its slot in Geostationary Orbit – placed 35,800 Kilometers above the equator and matching the Earth’s rotational speed to remain in the same spot in the sky.

SES-15 will eventually take up residence at 129 degrees West – a new orbital location to serve the Americas and the Caribbean. The spacecraft’s communications package has been optimized for data-intensive applications – comprising 16 Ku-Band transponders and a high-throughput Ka-Band payload, combining wide beam coverage over North America and high-throughput spot beams that cover the same area from Hawaii & Alaska to the eastern tip of Newfoundland.

Specific services provided by the satellite include aeronautical connectivity for flights over the continental U.S. and Canada, government communications, VSAT networks (Very-Small Aperture Terminals) and maritime services. SES-15 also sports a U.S. government-funded Wide Area Augmentation System (WAAS) payload for GPS augmentation that is accomplished with a large network of ground stations that track the variability in GPS satellite quality and beam correction messages to Geostationary satellites which relay them to all aircraft in their footprint.

SES-15 was initially planned to take the lower passenger position on a dual-satellite launch on an Ariane 5 rocket, but an increasingly packed manifest for lower-berth payloads prompted SES to switch over to the Soyuz rocket to get the satellite into orbit as soon as possible. The launch, however, has to be delayed from April 4 by a general strike in French Guiana that caused a complete stand-still at the space center for a month until an accord between protesters and the French Government was signed allocating funds to improve security, health and education opportunities in the small French territory.


After resumption of the launch campaign, it was fairly smooth sailing – the Soyuz rocket was moved to the ELS launch complex on Monday and crews installed the SES-15 satellite, already encapsulated in the protective payload fairing, later that day. Final tests and mission simulations confirmed the rocket and its payload were ready for countdown operations, initiated in the pre-dawn hours on Thursday.

The Russian State Commission provided clearance for fueling of the Soyuz after a final pre-launch review and rocket-grade Kerosene and Liquid Oxygen began flowing into the 12 propellant tanks on the rocket at the T-4-hour mark. In addition to 274 metric tons of propellants, Soyuz also received Nitrogen to pressurize its tanks during flight and Hydrogen Peroxide to drive the engine pumps.

The fully-fueled rocket was revealed 70 minutes prior to the day’s first of two T-0 opportunities and teams put in work final preparatory steps to load the rocket’s guidance profile into its digital flight control system and switch the satellite to battery power in readiness for the fast-paced events of the last six countdown minutes.

Hot-staging occurred four minutes and 47 seconds into the flight when the RD-0110 engine of the Block I upper stage soared to life and the pyrotechnic separation system sent the 27.8-meter core on its way to a watery grave in the Atlantic. Generating 30,400 Kilogram-force of thrust, Block I was targeting a sub-orbital delivery with engine shutdown eight minutes and 46 seconds into the flight followed three seconds later by separation of the Fregat upper stage.

Flying in its intermediate-performance version known as the Fregat-M, the upper stage assumed control of propulsive flight nine minutes and 49 seconds into the mission when firing up its 2,000-Kilogram-force S5.92 engine on a planned burn of 13 minutes and 45 seconds.

The flight profile used on Thursday differed from that used earlier this year by the first Geotransfer mission of the Europeanized Soyuz which made use of a simple one-burn injection into a standard Geostationary Transfer Orbit. Due to the requirements of the all-electric satellite, Fregat was tasked with a pair of burns to reach an orbit with an increased perigee altitude to avoid the satellite passing through the high-drag regions of Earth’s outermost atmosphere that would slow the satellite’s progress toward GEO.

After completing its first burn, Fregat went into a passive coast mode for the next four hours and 34 minutes, climbing uphill in a transfer orbit of 284 by 31,431 Kilometers to reach peak altitude where a propulsive maneuver would raise the perigee (low point) of the orbit. Re-start of the main engine was marked four hours and 57 minutes into the mission and the burn was only planned to last 52 seconds, boosting the perigee altitude by nearly 2,000 Kilometers.

The Soyuz VS17 mission aimed for an injection orbit of 2,200 by 31,300 Kilometers, inclined 6 degrees to either side of the equator. Following completion of the propulsive flight phase, Fregat used its attitude control thrusters to properly position for the spring-loaded separation of the SES-15 satellite five hours and 18 minutes after liftoff.

Arianespace confirmed Soyuz/Fregat hit the mark and dropped the satellite off in its intended orbit and SES was able to confirm good health of the SES-15 satellite after receiving signals from it through a ground station in Australia. It was the 40th SES satellite launched by Arianespace in a long-standing partnership that both parties hope to continue in the future.

Keeping up a steady pace of missions to make up for lost time, Arianespace plans to launch its next Ariane 5 on June 1 with the ViaSat-2 Internet satellite and the Eutelsat 172B spacecraft destined to service the Asia-Pacific Region.