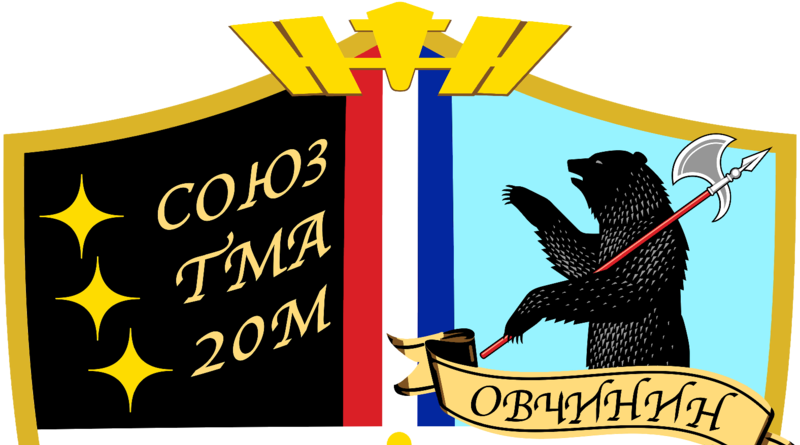 The Soyuz TMA-20M patch is of a shield shape used in many insignia including previous space missions. The four fields of the patch are separated by a band of colors representing the American and Russian flags to pay tribute to the joint American-Russian crew of the TMA-20M mission. The center of the patch features the silhouette of a Soyuz spacecraft with its various appendages and the patch is crowned by the International Space Station, the destination of the TMA-20M mission.

The three stars in the upper left field of the patch represent the three crew members of the Soyuz while the other three fields feature animals. The black bear comes from the coat of arms of the city of Rybinsk where Soyuz commander Alexey Ovchinin was born; Rybinsk is nicknamed the “capital of barge-haulers,” known as Burlaks in Russian – the callsign of the Soyuz TMA-20M spacecraft. The Bald Eagle in the lower right carries the vector of the NASA logo in its beak, representing Jeff Williams as the sole NASA astronaut on this mission. The grey crane in the lower left of the patch stands for Cosmonaut Oleg Skripochka, a symbol he used for his first space mission, Soyuz TMA-01M. Coincidentally, Skripochka got to fly on the very first Soyuz TMA-M spacecraft and again flies on the final mission of this spacecraft variant.