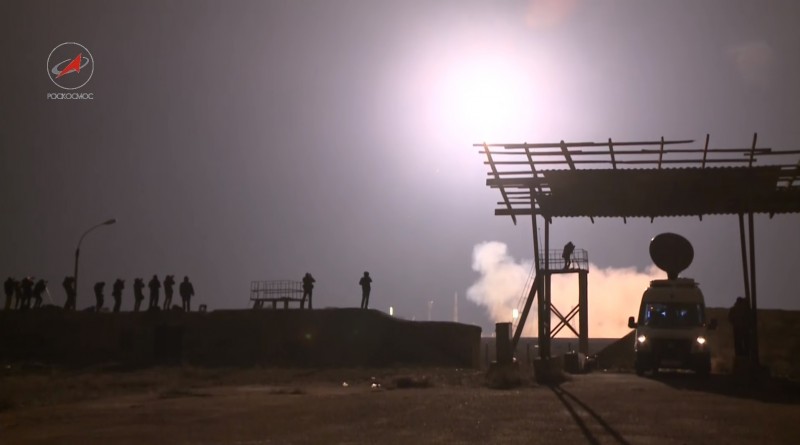 The Soyuz TMA-20M spacecraft and its three crew members successfully entered the fast lane to the International Space Station for an overnight rendezvous, being lifted into a very precise orbit by the Soyuz FG launch vehicle after its middle-of-the-night blastoff from Kazakhstan. The initial orbital parameters for the spacecraft, released by the Russian Mission Control Center, are within the tight limits needed by the Soyuz spacecraft to proceed with its planned four-orbit rendezvous, bringing the crew to their orbital destination within six hours of launch.

The three Soyuz TMA-20M crew members, rookie commander Alexey Ovchinin and veteran Flight Engineers Oleg Skripochka and future U.S. space flight record-holder Jeff Williams climbed into their spacecraft two and a half hours ahead of Friday’s liftoff, taking their seats atop 274 metric tons of explosive propellants. The 50-meter tall Soyuz FG rocket lit up the night skies over the Baikonur Cosmodrome after an on-time liftoff at 21:26:38 UTC, calculated based on the latest tracking data of ISS.

Powered by its boosters and core stage, all outfitted with multi-chamber engines, Soyuz soared into the night sky with a total thrust of 422 metric-ton-force, heading to the north-east to chase down the International Space Station that had passed over the Cosmodrome just minutes before launch. Soyuz fired its boosters for one minute and 58 seconds, their separation was visible in a clear night at the launch site.


With the boosters departing the vehicle at an altitude of 50 Kilometers, Soyuz continued powered flight on its Core Stage alone. Soyuz shed its launch shroud 85 Kilometers in altitude just after the T+2.5-minute mark, giving the crew a glimpse outside as they approached the first sunrise of their 174-day space mission.

The Core Stage shut down 4 minutes and 45 seconds after liftoff, handing off to the Block I upper stage in the typical hot-staging sequence. Block I with its RD-0110 four-chamber engine finished the job of boosting the Soyuz into orbit, making a burn of three minutes and 58 seconds. The 7,200-Kilogram spacecraft and its three crew members separated from the booster eight minutes and 48 seconds after liftoff, having reached a speed of 27,500 Kilometers per hour.

Soyuz TMA-20M – the last in the TMA-M series to fly – aimed for the following insertion orbit:

Russian Ground Stations tracked the Soyuz for seven minutes after spacecraft separation to get a precise fix on its orbit, published by the Mission Control Center as follows:

This orbit is well within the specified margins for the six-hour express rendezvous after a good insertion by the Soyuz FG launcher in another textbook mission. Orbital data from the Joint Space Operations Center was published a short time after launch, however, it should be noted that Russian ballisticians use a different Earth model than orbital parameters calculated by JSpOC:

Having arrived in orbit, Soyuz executed a number of critical steps, in particular the deployment of its two power-generating solar arrays and KURS antennas as well as the pressurization of the spacecraft’s Unified Propulsion System to be ready for the link-up with ISS. The crew was given a GO to proceed with all planned operations as they exited Russian Ground Station range on their first lap around the planet, set to feature a pair of main engine burns to begin the process of climbing up towards ISS straight away.

The first SKD main engine burn was set for T+46 minutes and will last 49 seconds to increase the vehicle’s velocity by 19.6 meters per second, raising the orbital mean altitude by 21 Kilometers. DV-2, as the second burn is known, occurred 90 minutes after launch to increase the vehicle’s speed by 12.4 meters per second and raise the perigee by 33 and the apogee by 20 Kilometers.

Both rendezvous burns were carried out successfully and the Soyuz passed its manual hand controller checks, confirming Commander Ovchinin can fly the vehicle under manual control in case of an issue with the automated rendezvous systems.

Ballistics experts used the tracking data gathered after launch and calculate the orbital parameters expected after the first two maneuvers so that the subsequent burns can be re-planned to fly out any insertion errors and position the Soyuz correctly for the Automated Rendezvous Sequence. The second orbit of the mission again includes a pair of engine burns – aiming to place the vehicle in a 281 by 302-Kilometer orbit for the initiation of the Automated Rendezvous Sequence at 1:03 UTC on Saturday.

Another ground-targeted rendezvous burn is completed a short time later to set the Soyuz on a course taking into the 200-Kilometer communications zone around ISS where relative navigation is possible. KURS will be powered up around 1:35 UTC to begin the final phase of the orbital link-up with Soyuz searching for the KURS signals transmitted by ISS.

Two omni-directional AKR antennas determine the basic signal direction and Soyuz automatically points the 2AO KURS antenna towards the signal to enter a Line-Of-Sight attitude in which heading and pitch angle can be determined by KURS for burn targeting. Closer to ISS, the ASF-1 KURS antenna will lock onto ISS for the calculation of range and range rate along with pitch, heading and line of sight angles.

KURS will undergo two tests, one at a range of 80 Kilometers and a shorter test at 15 Kilometers to verify good data is provided by the system and onboard burn targeting is working as planned. Heading in the close vicinity of ISS, Soyuz will reduce a deliberate targeting offset to reach the 400-meter point for the initiation of the flyaround, designed to take the Soyuz on a slow lap around the Station to get aligned with the Poisk docking compartment.

Soyuz will halt its approach when directly aligned with Poisk at a distance of 200 meters to allow the crew and Mission Control to make a quick assessment of systems and the alignment before commanding final approach to begin. Covering the last 200 meters, Soyuz will make a gentle approach, retract the 2AO antenna and conduct periodic DPO firings to remain on target.

Docking is set for 3:11:47 UTC, though the exact time may move by a few minutes depending on the progress of the flight and the duration of Stationkeeping which is known to vary.

After docking, Soyuz will retract its docking probe and close its hooks to pull the docking interfaces together to form a tight seal that is verified as part of a leak check before hatches will be opened and the three arriving crew members can be welcomed by Tim Kopra, Tim Peake and Yuri Malenchenko. Hatch opening is currently planned at 4:55 UTC.