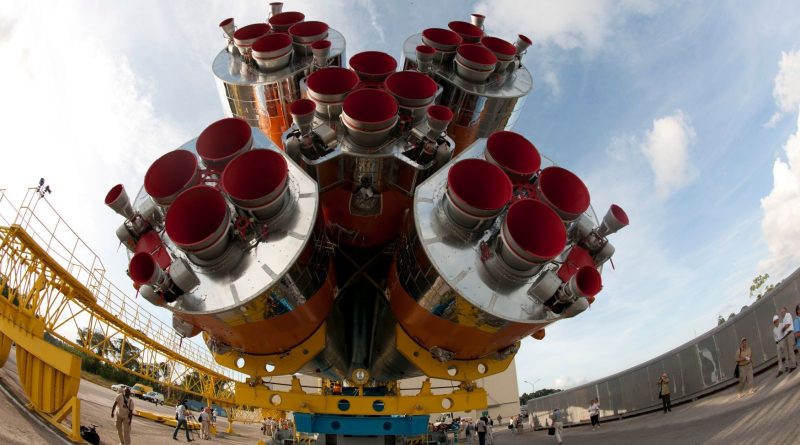 A Soyuz rocket has been assembled for launch from the Guiana Space Center on Tuesday, set to lift the next two Galileo satellites into orbit in the continued deployment of Europe’s Navigation Satellite Constellation.

Liftoff is planned for 8:48 UTC with Soyuz completing a standard nine-and-a-half-minute climb before its Fregat Upper Stage takes over for the remainder of a three-hour and 48-minute flight to Medium Earth Orbit over 23,000 Kilometers in altitude.

Deployment of the operational constellation began in 2011 with the launch of two In-Orbit Validation Satellites followed by another pair of IOV craft in 2012. The third Galileo launch in 2014 reached a lower-than-expected orbit, requiring the satellites to expend much of their onboard fuel to reach a usable orbit. 2015 saw three Soyuz launches with Galileo satellites bringing the total number of operational satellites in orbit to 12.


Tuesday’s VS15 launch marks the last planned Soyuz mission dedicated to the deployment of Galileo with subsequent launches switching to the Ariane 5 rocket that can lift four satellites into orbit. The first quadruplet launch is planned later this year followed by another two launches in 2017/2018 to bring the satellite constellation to operational strength.

Tuesday’s mission was added to the Galileo launch manifest earlier in the year based on the readiness of the satellites and the desire to accelerate the deployment pace. With four satellites flying on Ariane 5 in the fall, the Galileo constellation will enter its Initial Operational Capability, offering navigation services to customers.

The Galileo FM-10 and 11 satellites – named Daniele and Alizee – were delivered to French Guiana in early April coming from their manufacturer OHB in Bremen, Germany. Heading from Europe to South America aboard a 747 cargo aircraft, the two satellites completed the last leg of their journey via road transport. Arriving in a clean room at the launch base, the two satellites were unpacked and completed an inspection ahead of stand-alone testing and a fit check atop their launch dispenser that allows the two satellites to ride into orbit side by side.

The two 715-Kilogram satellites finished fueling for flight in early May and their installation on the payload dispenser was completed on May 10/11. While work on the satellites was still underway, the Fregat-MT upper stage in use for this launch finished its dedicated processing campaign at the purpose-built FCube facility where Fregat received its Hydrazine Reaction Control System propellant and main propulsion system propellant components, Unsymmetrical Dimethylhydrazine and Nitrogen Tetroxide plus Helium pressurant gas.

Fregat met its two passengers for the first time last week when the payload stack was installed atop the fully-fueled upper stage. Next, the Orbital Unit was encapsulated in the protective payload fairing, marking the last time the two satellites could be seen on prior to liftoff.

The Soyuz ST-B rocket for this flight completed assembly in the weeks ahead at the MIK processing facility.

Work included the installation of the four 19.6-meter long boosters on the 27.6-meter Core Stage ahead of the integration of the Block I third stage. In its ST-B version, Soyuz uses the well known design that has been flying for decades, though has been modified to improve the performance of the vehicle by introducing a new third stage with structural improvements and an upgraded closed cycle engine along with modern digital flight control systems.

When flying from French Guiana, Soyuz includes further changes to allow it to deal with the climate at the equatorial launch site and an explosive Flight Termination System – not used in missions from Russian Spaceports – is added to the 46-meter tall rocket. Soyuz ST-B, outfitted with a Fregat-MT upper stage with enlarged tanks, can lift up to 1,645 Kilograms to Medium Earth Orbit, making it just powerful enough to launch a pair of Galileo satellites.

Soyuz emerged from the MIK assembly building on Friday and was moved over to the ELS Launch Pad where it was placed in its vertical launch position, held in place by four support arms. The Mobile Service Gantry was moved in position over the vehicle, permitting the payload stack to be rolled out and hoisted atop its launch vehicle to complete the assembly of the Soyuz. With structural and electrical connections in place, the assembled launch vehicle went through a countdown and launch simulation over the weekend.

A final GO from mission managers was given on Monday after a review of the status of all required systems – the launch vehicle, satellites, ground tracking network and mission control system. With no outstanding issues, Soyuz was cleared for a lengthy countdown operation starting in the evening hours on Monday (local time.)

The second Fregat burn is planned to commence three hours and 38 minutes into the flight and last four minutes and 22 seconds. Galileo FM-10 and FM-11 are targeting an insertion orbit of 23,222 Kilometers at an inclination of 57.4 degrees. Spacecraft separation is planned at T+3 hours 47 minutes and 57 seconds as the two spacecraft are released simultaneously, being deployed into opposite directions to prevent a collision of the satellites.