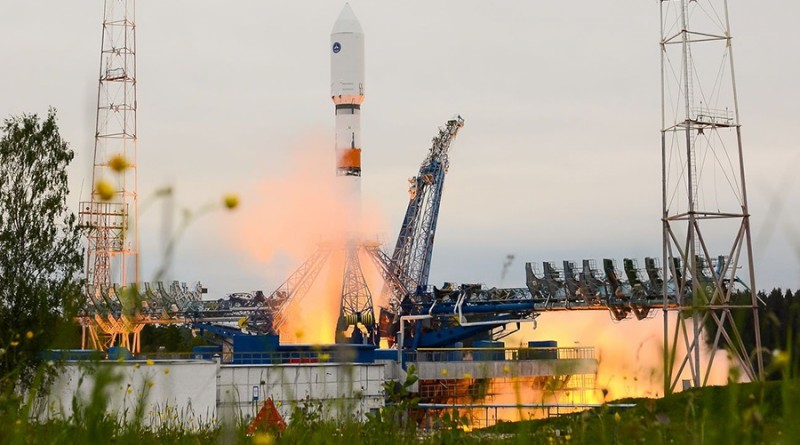 Russia’s Soyuz workhorse rocket lifted off from the Plesetsk Cosmodrome at 8:44 UTC on Sunday, embarking on a three-and-a-half-hour mission to a 19,100-Kilometer orbit around Earth to deliver a Glonass-M navigation satellite, replenishing the aging constellation as part of standard upkeep and maintenance.

Making its second launch of the week after Tuesday’s Galileo deployment from French Guiana, Soyuz blasted off from Site 43/4 at Russia’s primary military launch site, flying to the south east. The 46-meter tall Soyuz again delivered a flawless performance as part of a nine-and-a-half-minute ascent mission to lift the Fregat-M upper stage to a sub-orbital trajectory to take over control of the mission.


To directly deliver Glonass-M No. 53 close to the constellation’s operational orbit, the Fregat Upper Stage was tasked with three engine burns – the first immediately after separation from Soyuz to enter a preliminary Low Earth Orbit, the second to lift the apogee to over 19,100 Kilometers followed by a three-hour coast phase to set up for the critical circularization. Glonass-M was released into its target Medium Earth Orbit at 12:16 UTC and established communications with ground control.

The following orbital parameters were released for the Glonass-M No. 53 satellite and its spent Fregat Upper Stage:

Glonass, Russia’s independent Navigation Program, entered development in the midst of the Cold War in 1976 and saw its first launch in 1982.

It took over a decade to deploy the satellite constellation to operational strength and, over many years of operation in the 1990s, the program struggled to maintain operational services due to funding issues causing frequent outages when satellites could not be replaced at the end of their service lives.

A push to replenish the constellation was started in the 2000s, though a number of launch failures made upkeep of the Glonass system a difficult task. Continuing to struggle with funding and schedules, Glonass was shifted to a Launch-On-Need architecture in recent years – only delivering satellites to orbit when aging satellites in orbit are close to the end of usable service and begin showing signs of degradation.

Launching satellites only when needed is implemented as a cost-saving measure and keeps the constellation at operational strength with only a minimal number of operational spares. Delivering satellites to orbit as part of a scheduled outline can lead to more operational satellites in orbit than actually needed which has been the case for the American GPS after a rapid launch initiative with the GPS IIF satellites.

Glonass, GPS and Galileo are similar in architecture – featuring a constellation of spacecraft in Medium Earth Orbit around 20,000 Kilometers in altitude.

To deliver global round-the-clock coverage, the systems consist of over two dozen satellites in different orbital planes to ensure a sufficient number of spacecraft is overhead at any given location around Earth to enable receivers to calculate their precise position.

Prior to this launch, the Glonass program had an inventory of eight finished second generation Glonass-M satellites and several third-generation Glonass-K satellites were being manufactured, however, the production of the latest generation of spacecraft was slowed down by sanctions placed over Russia by the West. With a limited number of satellites in stock, operators have to weigh very carefully when to deploy a new satellite.

Glonass-M No. 52 launched into Plane 3 of the constellation in February to fill a hole in the operational system created by the unexpected failure of a Glonass bird launched in 2011 and the subsequent death of a spare satellite that had well outlived its expected mission duration.

Though fully operational as of Sunday, Glonass includes seven satellites that have exceeded their operational service lives – likely to require replacement in the near future. Two more Glonass-M launches on Soyuz are on the books for the remainder of the year and a three-satellite launch on Proton that had been removed from the schedule in 2015 has been tentatively penciled in for late 2016 or early 2017.

The Launch of Glonass-M No.53 used the Soyuz 2-1B rocket – one of two modernized versions of the workhorse of the Russian & Soviet Space Programs using the well-known design of the Soyuz consisting of a large core stage with four-liquid fueled boosters strapped to it and a Block I upper stage installed atop. Overall, Soyuz 2-1B stands 46.1 meters tall weighing 308,000 Kilograms when fully fueled for launch.

The Soyuz headed into an eight-hour countdown to get ready for liftoff, starting with a series of tests and reconfigurations to set up for propellant loading at L-4 hours, filling the rocket with over 274 metric tons of Kerosene and Liquid Oxygen. Liftoff was preceded by a six-minute automated countdown sequence including the final steps such as tank pressurization and transfer to internal power ahead of engine ignition at T-20 seconds.

Liftoff occurred at precisely 8:44:37 UTC on Sunday as Soyuz began rising from its launch pad with a total thrust of 422 metric-ton-force. The vehicle quickly swung to the south-east to head towards a 64.7° orbit, using its digital guidance system to execute a pitch and roll maneuver shortly after liftoff.

Consuming 1,600 Kilograms of propellants per second, Soyuz headed uphill, its boosters delivering the majority of thrust for the initial portion of the flight to rapidly accelerate the launch vehicle. Soyuz pushed through Mach 1 and encountered Maximum Dynamic Pressure just after passing 70 seconds into the mission.

One minute and 58 seconds into powered flight, the RD-107A engines of the boosters were shut down after exhausting 39,600 Kilograms of propellants each. Immediately after engine shutdown, the four boosters were jettisoned by pyrotechnic devices and pistons that pushed the boosters outward for a clean separation.

With the 19.6-meter long boosters tumbling back to Earth, the Soyuz headed on powered by its Core Stage alone, its RD-108A engine consuming over 300 Kilograms of propellant per second to deliver 102,000 Kilogram-force of thrust. Shedding the protective payload fairing along the way, the 27.8-meter core stage burned until T+4 minutes and 45 seconds. At T+4:47, the command to ignite the third stage’s RD-0124 engine was sent followed after a short interval by the initiation of the stage separation pyrotechnics that severed the connection between the third and core stage to allow the thrust of the engine to pull the third stage away from the spent core.

Delivering 30 metric tons of thrust, the 6.8-meter long third stage consumed nearly 23 metric tons of LOX and Kerosene in four and a half minutes, placing the stack on the expected trajectory for Fregat separation that occurred just before the T+9.5-minute-mark.

The third stage of the Soyuz was to remain on a sub-orbital trajectory heading for re-entry. To avoid re-entry, Fregat had to raise the perigee of its insertion trajectory by conducting a short main engine burn to enter an orbit of around 200 by 240 Kilometers.

Fregat is an autonomous Upper Stage that is equipped with its own power, propulsion and control system to perform flights of up to 48 hours. The hypergolic S5.92 engine of the upper stage is capable of operating at two thrust settings – 2,025 and 1,430 Kilogram-force.