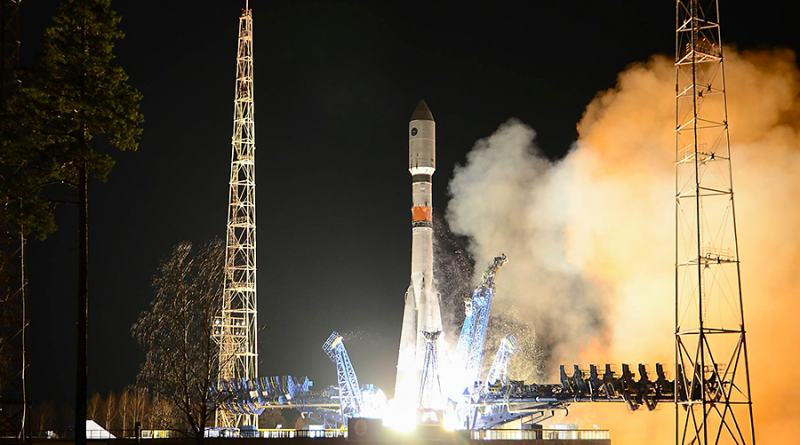 Russia’s trusted Soyuz rocket blasted off from the Plesetsk Cosmodrome in the early hours on Friday with a Glonass navigation satellite to replace a recently-failed member of the country’s Global Navigation Satellite System that has switched to a launch-on-need scheme in recent years to keep the constellation operational while waiting for the next generation of satellites to become available.

Soyuz – flying in its modernized 2-1B version with a Fregat-M upper stage – blasted off from Site 43/4 at the northernmost Cosmodrome in Russia at precisely 0:02:32 UTC, lighting up the night as it embarked on a multi-hour mission to dispatch its 1,500-Kilogram payload into a Medium Earth Orbit around 19,100 Kilometers in altitude. The Soyuz rocket was in action for a nine-and-a-half minute ascent mission to lift the Fregat-M onto a sub-orbital arc from where the upper stage was tasked with a three-burn mission profile to reach the target orbit for spacecraft separation three and a half hours after the early morning blastoff.


The Russian Ministry of Defence confirmed the successful launch of Glonass-M No. 52 Friday morning and orbital parameters released by the Joint Space Operations Center confirmed an on-target injection:

Friday’s launch marked only the third orbital space launch from Russia’s primary military launch site this year, following up on the launch of the second EKS / Tundra missile warning satellite in May and the launch of the secret Kosmos 2519 satellite tasked with an Earth-imaging mission and recently starting a satellite inspection mission via a small sub-satellite that separated from the parent spacecraft and had a distant encounter with another Kosmos craft and made closer flybys of the parent satellite itself.

It was the eleventh launch of Russia’s Soyuz in 2017 – two have occurred from French Guiana, six were from Baikonur (five in support of the International Space Station) and three were from Plesetsk. At least another four Soyuz launches are still on the manifest for 2017, two from Baikonur and two from the new Vostochny Cosmodrome with the potential of one or two more missions from Plesetsk, though military manifests are less clear.


Glonass is Russia’s independent Global Navigation Satellite System, initiated in the midst of the Cold War in 1976 and seeing its first launch in 1982. The constellation reached operational strength after a decade-long deployment effort, but after the end of the Soviet Union, struggled to remain in service due to funding issues causing frequent outages when satellites could not be replaced at the end of their lives.

A push to replenish the constellation was started in the 2000s, though continued funding troubles and a string of launch failures made upkeep of Glonass a difficult task. The second generation of Glonass satellites, Glonass-M, was inaugurated in 2003 with a longer service life of seven years, higher navigation accuracy and additional military and civilian signals. By 2011, the Glonass system was back at full operational strength and launches switched from triplet launches on Proton rockets to a combination of Proton missions and single-satellite launches on Soyuz to keep the constellation replenished.

24 satellites are needed in an active role to guarantee round-the-clock coverage across the globe since a sufficient number of satellites must be overhead at any given location to allow a user on the ground to calculate its position. Additionally, in-orbit spares in each of the three planes of the constellation are desired to ensure satellites that stop functioning can be replaced quickly.

Production of Glonass-M satellites ended in mid-2015 with 61 satellites built by ISS Reshetnev – nine of which were available as ground spares to be orbited as necessary to keep the constellation operational. The spare satellites are being launched only when needed to extend Glonass services as long as possible in order to bridge a gap between the second-generation satellites and the next generation, known as Glonass-K.

Glonass-K1 – the first iteration of the Uragan Block K – switches from a pressurized satellite platform to ISS Reshetnev’s Ekspress-1000A bus for a considerable reduction of launch mass to around 935kg. K1 satellites have a planned service life of 10 years and will support all existing L1 and L2 civilian & military signals and add civilian CDMA signals to be transmitted in the L3 band.

The initial plan was to only launch two Glonass-K1 prototypes and then move on to Block K2, but sanctions placed upon Russia by the west made procurement of K2 parts difficult which sent the satellites back to the drawing board. K1 prototypes were launched in 2011 and 2014 with the first only remaining in a prototype role without entering the active constellation and the second starting operational services in Plane II of the constellation.

Presently, ISS Reshetnev expects to be able to begin launching serial-produced K1 satellites some time next year with a total of 13 spacecraft on order. Glonass-K2 – utilizing the heavier Ekspress-1000K platform with a significant increase in power – is expected to launch an initial prototype no-earlier-than next year and will add L1 and L2 CDMA signals for civilian and military use as well as search and rescue functions. The introduction of K2 satellites will also mark the start of an expansion to 30 active satellites, introducing three new orbital planes.


Currently under study is the Glonass-KM program that would succeed Glonass-K in the second half of the 2020s, continuing all legacy functions and introducing interoperable signals compliant with GPS and Galileo/Beidou including modernized L1C and L5 Safety of Life.

Friday’s launch of Glonass-M No. 52 follows up on the most recent Glonass launch that occurred back in May 2016 with the Glonass-M No. 53 satellite. Six Glonass-M spacecraft now remain in storage to be launched as needed to keep the system up and running before the next-generation satellites are available to enter active duty.

According to this week’s Glonass status report, the constellation currently has 25 satellites, 23 of which are marked as operational. One spacecraft (the first Glonass-K1) is in flight testing status and the Glonass #715 satellite – among the oldest active members of the constellation – suffered an anomaly in June and is in a checkout status, leaving Orbital Slot #14 (Plane II) unoccupied. Of the 23 operating satellites, 13 have already exceeded their nominal seven-year life expectancy.

Glonass-M No. 52 – most likely destined for the empty slot #14 in Plane II – was shipped from ISS Reshetnev to the Plesetsk launch base around August 25 to undergo final preparations before being installed atop its Fregat-M upper stage for encapsulation and installation on the Soyuz booster.

In use on Friday was the Soyuz 2-1B modification – one of two modernized versions of the undisputed workhorse of the Russian and Soviet space programs. Utilizing the well-proven design of four boosters around a large core stage and a Block I sitting atop, Soyuz 2-1B stands 46 meters tall and weighs 308 metric tons at launch, capable of lifting 7,600 Kilograms into orbit.

Setting the stage for a nighttime liftoff, Soyuz entered an eight-hour countdown on Thursday, starting with final checkouts before the propellant loading sequence picked up at L-4 hours to load the vehicle with some 274 metric tons of Kerosene and Liquid Oxygen as well as Nitrogen/Helium pressurization gases and Hydrogen Peroxide to drive the core & booster turbopumps. Revealed on its launch pad, Soyuz completed a six-minute automated countdown sequence to pressurize its tanks, switch from ground to onboard power and purge its engines prior to reception of the ignition command at T-20 seconds.

Soyuz took flight at precisely 0:02:32 UTC – 3:02 a.m. local time, rising from its launch pad with a thrust of 422 metric ton force. The vehicle was expected pitch and roll onto an ascent path taking it to a 64.8-degree orbit with launch precisely timed to carry Glonass-M No. 52 into its desired position in Plane II of the constellation.

Burning 1,600 Kilograms of propellants every second of powered flight, Soyuz was to fire its boosters for the first 118 seconds of the flight – each burning nearly 40 metric tons of propellants to help accelerate Soyuz to a speed of 1.5 Kilometers per second. Exhausting their propellant supply, the 19.6-meter long boosters were to be jettisoned and pushed out and away from the still-firing core stage – relying on its four-chamber RD-108A engine to push the vehicle toward space.

Generating 102 metric ton force of thrust when flying through the tenuous upper atmosphere, Soyuz was to drop its payload fairing once aerodynamic forces could no longer harm the Glonass satellite. Hot-staging was expected to occur four minutes and 45 seconds into the flight with the core stage shutting down its four-chamber engine and the third stage firing up at the moment of stage separation to pull away from the 27.8-meter long core.

Firing up its 30-metric-ton-force RD-0124 engine, the modified Block I third stage was set for a burn of four and a half minutes, burning some 25 metric tons of propellant to accelerate the stack onto a sub-orbital arc for Fregat separation just before hitting T+9.5 minutes into the flight.

The autonomous Fregat Upper Stage was then to assume control of powered flight – set for a lengthy three-burn mission to deliver Glonass-M No. 52 directly into its desired position in the Glonass constellation. Fregat-M stands over 1.6 meters tall and measures 3.35 meters in diameter, holding 5,750 Kilograms of self-igniting propellants expended by a restartable, S5.92 engine to generate 2,000-Kilogram-force of thrust.

Fregat’s first order of business was an initial firing of the main engine to boost the vehicle’s speed to orbital velocity, typically aiming for a Parking Orbit of 200 by 240 Kilometers, based on previous Glonass missions. The first coast phase is fairly short as Fregat continues passively until reaching the proper position for the lengthy second burn, around 9.5 minutes in duration to lift the stack into an elliptical transfer orbit peaking near 19,100 Kilometers in altitude.

Fregat will then coast for about three hours to climb all the way up to apogee so that the third burn can serve as a circularization maneuver. This burn has a planned duration just shy of four minutes, targeting an orbit 19,130 Kilometers in altitude for spacecraft separation some three hours and 30 minutes after liftoff.