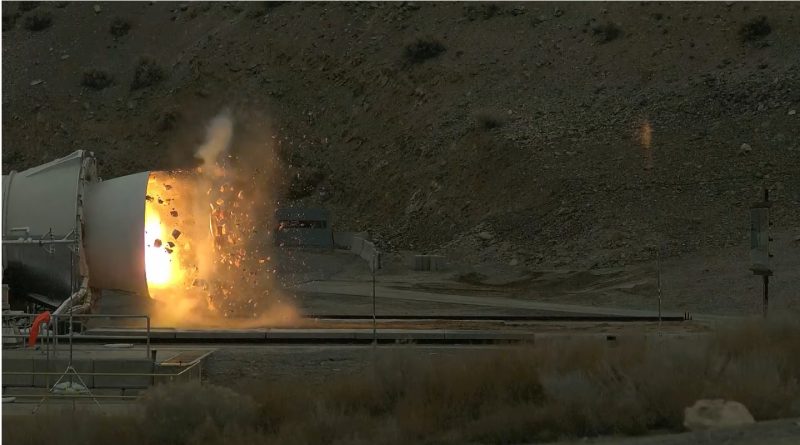 NASA and Orbital ATK are gearing up for the second and final qualification test of the Solid Rocket Booster for the upcoming Space Launch System. The booster – securely held in a horizontal position on the ground – will rock the Utah desert for a full two-minute burn on Tuesday with ignition planned at 14:05 UTC.

Tuesday’s firing marks the final critical test before the large five-segment Solid Rocket Boosters (SRBs) are cleared for flight on SLS, currently aiming for its debut launch in late 2018 to take an uncrewed Orion spacecraft on a shakedown mission around the Moon.

The Space Launch System’s twin boosters largely build on heritage from the Space Shuttle Program that used four-segment boosters. However, to accomplish its bold missions taking humans Beyond Earth Orbit, SLS will need bigger boosters with five instead of four segments.


Adding a fifth segment to the existing Shuttle SRB is not as simple as it may initially sound, requiring extensive thermal and structural analysis as well as a complete test program.

Tuesday’s test will take place at Orbital ATK’s T-97 test stand at the Promontory, Utah facility. It will mark the second of two Qualification Tests that build on three prior Development Test firings to lead into final reviews to clear the redesigned boosters for flight aboard SLS, delivering the necessary kick to lift the ultra-heavy-lift launcher off the ground and into orbit.

While the Shuttle’s boosters were re-used after operational missions, SLS will fly in a fully expendable configuration, dropping the boosters into the Ocean with no plans for re-use.

However, Orbital ATK can use its inventory of Shuttle booster segments to build the SLS SRBs. As such, Qualification Motor 2, to be fired on Tuesday, includes case segments flown on a total of 40 Shuttle flights and fired for seven static tests. All but one booster segment have flown on the Shuttle, the only new segment being one of the aft stiffeners.

The five-segment SRBs deliver 25% more total impulse than the Shuttle’s boosters did and incorporate a number of modifications aside from adding one center segment. Modifications include the addition of modern avionics and a new insulation that replaces the Shuttle SRB’s heavy asbestos insulation, cutting around 860kg.

Overall, the five-segment SRB as flown on SLS measures 53.95 meters in length, is 3.71 meters in diameter and has a mass of 726,000 Kilograms. The motor casing consists of 12.7-millimeter thick steel and the individual motor segments are mated via field joints consisting of a tang and clevis secured by a pin. Joints between the individual cylindrical elements of each segment are known as factory joints, employing a similar design. The joints are sealed by O-Rings and include leak check ports to verify the integrity of the rings after integration.

The booster from aft to forward consists of the aft skirt housing thrust vector control systems & separation motors, the solid rocket motor nozzle extension, the lower segment consisting of one attach segment and two stiffeners, the three center motor segments each comprised of a capture feature cylinder and a cylindrical segment, and the forward motor segment that is topped by the forward dome and frustum & nose cap (not present for the test).

The boosters are loaded with a typical solid-propellant mixture consisting of 16% aluminum powder acting as fuel, 69.8% ammonium perchlorate acting as oxidizer, 0.2% iron oxide catalyst and 12% polybutadiene-based binder and 2% curing agent that gives the propellant a rubbery texture.

The SRBs host their own hydraulic power units fueled by hydrazine that drives a turbine powering a hydraulic pump to provide working pressure to the two servoactuators that gimbal the nozzle by +/-8 degrees to provide thrust vector control as commanded by the flight computer. Two HPUs are installed on each SRB aft skirt to provide redundant TVC capabilities.

Ignition of the booster is accomplished through a complex chain of safety barriers that require three signals to be present to ignite NASA Standard Detonators which in turn set off a pyro booster charge itself igniting the propellant in the igniter initiator that expels high-temperature, high-pressure combustion products down the entire length of the booster leading to an instantaneous ignition of the solid rocket motor propellant across its entire inner surface area.

Chamber pressure and thrust of the booster can be varied over the course of its burn based on the needs of the launch vehicle to limit stress at MaxQ and towards the end of the SRB burn. The five-segment SLS boosters deliver a peak thrust of 16 Meganewtons (1,630 metric ton-force or 22 million horsepower).

The very first five-segment booster was tested in October 2003 as an Engineering Test Motor aiming to explore the possibility of flying the Space Shuttle with the larger SRBs to increase its ISS payload capability by 9 metric tons.

The first Development Motor was successfully tested in September 2009, completing a full-duration instrumented test firing at ambient temperature. The next test, DM-2, in August 2010 used a motor that was cooled to a core temperature of 4°C – the minimum temperature the SRB is certified for to evaluate its performance in extremely cold conditions while the DM-3 test in September 2011 explored the upper end of the allowable temperature range at 32°C.

With three successful development tests, the way was clear for the final two Qualification Tests.

QM-1 in March 2015 again used a booster heated to its maximum allowable temperature while QM-2 will repeat the cold firing to validate performance parameters right on the edge of the qualification envelope of the boosters which covers all typical temperatures at the Cape Canaveral launch site.

Casting of the SRB segments for QM-2 was completed by late 2015 and stacking of the SRB finished in February. Since the first week of May, thermal conditioning has been underway since it takes a long time to cool down 726 metric tons of material to just 4°C. No fewer than 11 dry runs of the test firing were conducted in the last two weeks to verify all data-gathering equipment and safety procedures are in place for the critical firing for which there is only one attempt since solid rockets can not be shut down once lit.

A Go-No Go decision comes at T-6 hours to verify all systems are in readiness and the weather is favorable for the test. At this point, the test bay housing that kept the booster protected and at the right temperature will be retracted and teams will begin clearing out the danger zone.

The formal countdown procedure starts at T-1 hour to ready all high and low-speed data collection systems. A final Go for the test will be given at T-9 minutes and final safety barriers will be removed. As part of a highly choreographed sequence, data recorders will be started and data coming from hundreds of channels will be verified to clear the way for ignition when clocks hit zero.

QM-2 has a list of 82 specific objectives to be accomplished by analyzing data gathered by high speed cameras, temperature & pressure sensors, strain gauges, displacement sensors, electrical sensors and a range of other sensing equipment to deliver a full picture of the performance of all systems of the booster during its 126-second firing. Of particular focus are systems that have received an upgrade from the Shuttle to the SLS boosters such as the new insulation and propellant liner and the redesigned nozzle that will increase the robustness of the booster design.

In addition to data collection during the burn, teams will perform forensics on the burnt out booster to assess how the different systems behaved in the extreme thermal environment reaching a peak temperature of just over 3,000°C and an exhaust gas velocity in excess of Mach 3. To preserve the condition of the booster at burnout, a high-fidelity quenching system will deliver Carbon Dioxide into the chamber an the exterior of the cases will be cooled down with water for several hours after the test.

Eventually flying on the Space Launch System, the two Solid Rocket Boosters will deliver 75% of the total liftoff thrust of the SLS rocket operating alongside the four RS-25 engines of the core stage of the rocket that uses heritage from the Space Shuttle’s external tank.

In total, SLS will have a liftoff thrust of 39.5 Meganewtons, being capable of lifting 70 metric tons into Low Earth Orbit when flying in its initial configuration ahead of the Block II upgrade that will increase payload capability to 130 metric tons.

Initially, SLS will use an Interim Cryogenic Propulsion Stage as second stage with a single RL-10 engine until the introduction of the Exploration Upper Stage powered by four RL-10 engines as part of the Block IB upgrade of SLS that will be capable of lifting over 90 metric tons into orbit. The 130mt Block II upgrade is still in the distant future, combining advanced boosters with Exploration Upper Stage.