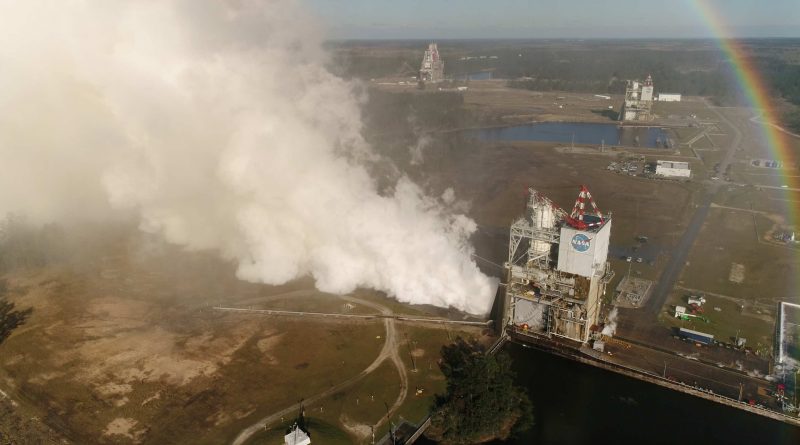 NASA test fired a former Space Shuttle Main Engine on Wednesday as testing of the RS-25 engines continues in preparation for their new role of powering the Space Launch System rocket for Beyond Earth Orbit exploration missions.

The test was conducted on the A-1 test stand at the Stennis Space Center and marked the first RS-25 test of 2017, involving development engine 0528 to evaluate a number of test objectives to ensure the engines can fulfill the requirements of SLS. Over a total burn duration of 380 seconds, the engine fired at three different throttle stages to collect data in different operational environments.

Wednesday’s test was conducted by engine manufacturer Aerojet Rocketdyne and prime contractor for Stennis facilities Syncom Space Services. It marked the 12th RS-25 test in support of SLS in a program that aims to verify the added requirements and performance beyond what was needed for the Space Shuttle. The test was the first to be observed by drones, creating some never-before-seen views of the test firing.

The test was primarily dedicated to validate a pair of tweaks on the engine – a low-pressure fuel duct and an increase in the Liquid Oxygen inlet pressure as the result of a request from the SLS vehicle side to better deal with loads on the launch vehicle during ascent. This change takes the LOX inlet pressure beyond what the engine was certified for during the Shuttle’s tenure and therefore requires extensive evaluation and testing.


“The RS-25 is a remarkable engine that continues to undergo testing at Stennis to ensure that the Space Launch System rocket will have the performance necessary to safely take our astronauts into deep space,” said Aerojet Rocketdyne CEO and President Eileen Drake. “Never before has drone technology been used to give us a bird’s eye view of our engine test.”

The RS-25 is considered one of the most robust and flight-proven engines in the world given its three-decade career powering NASA’s Space Shuttle into orbit. At the end of the Shuttle Program, RS-25 had the end of a successful career in close sight, having behaved exceptionally well in the vast majority of missions with only one major engine-related incident that led to a safe “Abort to Orbit” on mission STS-51F.

The cancellation of NASA’s Constellation Program in favor of SLS brought new life for the RS-25 design when it was selected as the main engine for the massive SLS Core Stage that will host four engines. SLS will use the leftover Shuttle inventory of flown and non-flown RS-25s to power its first four missions before newly produced engines will be flown.

Modifications of the existing engines to make them fit for SLS are limited to the Engine Control Units that replace the Shuttle-era controllers to make the engines compatible with the SLS rocket’s control system. New production engines, initially known as RS-25E but now only referred to as RS-25, will also implement a number of simplifications to transition the engine from a reusable design to a cost-effective expendable design by replacing a number of long-life hardware items. On SLS, RS-25 will be flown at 109% of rated performance, the Shuttle used the 104.5% setting to create more benign operational environments for re-use considerations.

To qualify the engines, and in particular the all-new controllers, NASA lined up a multi-year testing campaign starting in January 2015, nearly four years after the last RS-25 was fired on the final launch of the Space Shuttle. Two development engines used by the Space Shuttle program were chosen for the SLS testing campaign, planned to amass 3,500 and 4,500 seconds over the course of 18 planned firings.

The next four tests of engine 0528, planned before the end of May, will involve Flight Models of the Engine Control Units for qualification of the actual flight units for the inaugural SLS mission. The second half of 2017 will see initial acceptance tests of flight engines that will then be shipped to NASA’s Michoud Assembly Facility for integration with the first flight stage of SLS, planned for use on Exploration Mission-1 currently slated for 2018, but under review for the possibility of flying that mission with a crew which would cause a fairly significant slip.

Qualification of the new Engine Control Units will be formally completed with the first flight engine acceptance test.

Once the EM-1 core stage is fully assembled at Michoud, it will ship to Stennis where the B-2 Test Stand is currently being prepared to handle a test firing of the massive core stage with all four engines operating simultaneously. The SLS core stage, with design heritage from the Shuttle’s External Tank, will stand 64.8 meters tall with a diameter of 8.4 meters, holding nearly 1,000 metric tons of Liquid Oxygen and Liquid Hydrogen Propellant.

After the first four flight engines pass their acceptance tests, Stennis will get even busier with a barrage of tests lined up for 2018 and 2019 to validate the new production RS-25s that have a number of modifications to make them more cost-effective as expendable engines, no longer built for refurbishment. These qualification tests will also raise the nominal thrust setting by another 2% to push the engines to their highest performance that can be safely achieved to give SLS the best possible payload capability.