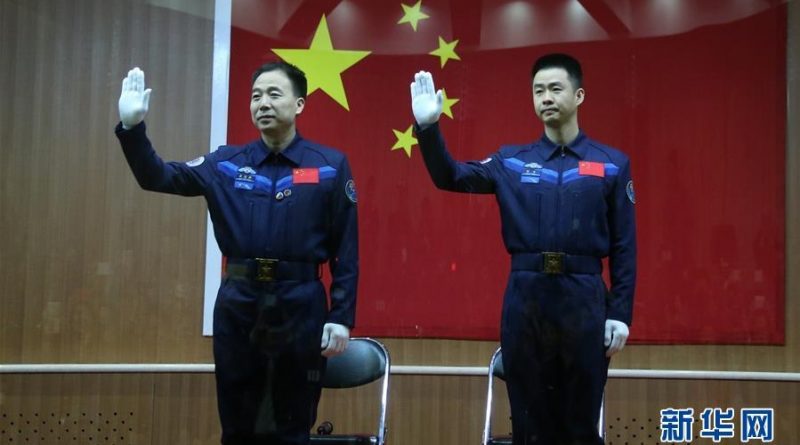 China has begun the countdown to the country’s longest crewed space mission to date, now confirmed for liftoff on a Long March 2F rocket at 23:30 UTC on Sunday after the detailed flight plan and the crew’s identities were kept under close wraps until the day before launch.

The Shenzhou-11 mission will more than double China’s existing space endurance record, aiming for a mission duration of 33 days, 30 of which will be spent aboard the Tiangong-2 space laboratory lifted into orbit last month by a CZ-2F carrier rocket to continue an effort to master the technology and procedures needed to sustain a large modular space station in Low Earth Orbit – a goal China aims to fulfill before the end of the decade.

The launch campaign for the Shenzhou-11 mission – China’s first crewed flight in over three years – was unusually silent. Normally, China’s human space endeavors represent the only exception in a typically secretive spaceflight program, but for this mission, the planned launch time, flight duration and even the identity of the crew members was kept secret until a press conference held at 1 UTC on Sunday – less than 24 hours before the scheduled launch time.


Selected as the crew for China’s most ambitious human space mission to date is a veteran astronaut with two previous space flights and a space rookie.

Serving as commander of the Shenzhou 11 mission will be Jing Haipeng who is a veteran of the Shenzhou-7 and 9 missions, spending 15 days and 12 hours in space. A trained fighter pilot, Jing was selected as part of the 1998 astronaut class.

Shenzhou-7 was launched in September 2008 as China’s third crewed mission to space, the first with a crew of three and the first (and to date only) mission to attempt a spacewalk. Jing, serving as the Descent Module Monitor Astronaut, remained inside the Entry Module while his crew mates Zhai Zhigang and Liu Boming brought the Orbital Module down to vacuum to enable Zhigang to venture outside in a spacewalk lasting only 22 minutes. The total mission duration for SZ-7 was two days and 20.5 hours.

Jing was the commander of the Shenzhou-9 mission in 2012, the first crewed flight to the Tiangong-1 space laboratory that launched in 2011 and was visited by an uncrewed Shenzhou to demonstrate the docking sequence.

The crew, including China’s first woman in space, completed a pair of docking maneuvers, the first in automated mode and the second, about halfway through their planned stay on Tiangong in manual mode, exercising an undocking – re-docking maneuver. The mission was 12 days and 15.5 hours in duration.

With his role as the commander of Shenzhou-11, the 50-year old Jing will become the first Chinese astronaut to fly to space three times, further adding to his existing record.

Chen Dong was selected as an astronaut as part of the 2010 class of seven astronauts – five male and two female. To date, only the two women, Liu Yang and Wang Yaping, have flown to space out of the all-pilot astronaut class. 38 years old, Chen will be responsible for backing up his commander during mission critical events and completing a full schedule of experiments aboard Tiangong-2.

Spending a full month aboard the Space Laboratory, the crew will follow a schedule of six eight-hour work days per week dedicated to the various experiments that cover a number of areas with particular focus on microgravity plant-growth, biotechnology, human physiology in space, and technology demonstrations. The crew’s home in space measures 10.4 meters in length, is 3.35 meters in diameter and offers a habitable volume of 15 cubic meters featuring state of the art science facilities, an exercise bike for the crew, and a pair of crew quarters.

Shenzhou-11 is the last stepping stone in terms of crew activity to pave the way to the modular Chinese Space Station that is expected to begin deployment before the end of the decade using China’s new, more powerful rockets to lift the individual modules to orbit. Another important technique – in space cargo delivery and refueling – will be demonstrated next year when the Tianzhou-1 cargo craft completes a demonstration mission to Tiangong-2.

Now on the eve of their launch on a five-week space mission, the two crew members will be looking back at a lengthy training process for what is shaping up to be a relatively busy mission in terms of the scientific program waiting for them aboard the Tiangong-2 space station module.

They arrived at the Jiuquan Satellite Launch Center earlier this week, after Monday’s rollout of the 58-meter tall Long March 2F rocket, to complete an ingress and ascent rehearsal, also participating in traditional pre-launch ceremonies.

The trusted Long March 2F rocket is comprised of four boosters clustered around a large core stage and topped by a second stage tasked with giving the vehicle the final boost into orbit. It is based on the CZ-2E which had to undergo over 200 modifications to meet the standards for launching crews into space.

Countdown Operations get underway at Jiuquan

Countdown operations at Launch Area 4, Jiuquan kicked off around 18:30 UTC on Saturday when engineers put tanking procedures in motion to fill the Long March 2F rocket with over 410 metric tons of hypergolic propellants – Unsymmetrical Dimethylhydrazine and Nitrogen Tetroxide. Although highly toxic, the propellant combination has the advantage of being storable at room temperature, allowing tanking to be finished well ahead of the crew’s arrival at the launch pad.

The crew’s countdown will begin in the overnight hours to Monday (local time) with a last meal in the comforts of gravity ahead of a busy final preparations phase. The two crewmen will put on their Launch and Entry Suits five hours prior to launch, arriving at the launch pad with 2.5 hours on the countdown clock to ingress their Shenzhou spacecraft.

Commander Jing Haipeng will enter the center seat inside the Entry Module while Chen Dong boards the right seat.

The crew will be sealed off inside the Entry Module and the side hatch of the Orbital Module will also be closed to mark the start of leak checks while teams on the outside button up the payload fairing and depart the launch pad.

The 480-metric-ton rocket will be revealed atop its launch pad at T-45 minutes when the two lower Service Platforms retract, followed by the upper section at T-27 minutes. Terminal countdown picks up at T-15 minutes when the Launch Abort System is activated and placed in automatic mode.

Shenzhou-11 transitions to internal power, followed later by the Long March 2F rocket and the launch team will perform a last Go/No Go check at T-4 minutes. At that point, the crew members close their helmets to be ready for the ride into orbit.

Tanks on the rocket start pressurizing in the final two countdown minutes and the umbilical arms detach and retract inside the last minutes of the count.

The final ten seconds will be counted down in Chinese and, when clocks hit zero, Long March 2F will command its four boosters and core stage to fire up.

Rising from its pad with a total thrust of 604 metric-ton force, Long March 2F will complete a brief vertical ascent before pitching and rolling onto a south-easterly trajectory across the Chinese mainland.

Switching to mid-altitude abort mode, Shenzhou-11 will jettison its Launch Escape Tower 121 seconds after liftoff. Like the Russian Soyuz which it closely resembles, Shenzhou has launch abort capabilities from the pre-launch phase all the way into orbit.

The four boosters – each 15.3 meters tall and 2.25 meters in diameter – will exhaust their propellant supply of 37,800 kg (each) 127 seconds into the flight, shutting down their 740-Kilonewton YF-20B engines. Separation of the boosters occurs two minutes and 35 seconds into the flight followed by a very brief period of stabilization by the first stage.

The 28.5-meter tall core stage will shut down its YF-21B engine cluster comprised of four YF-20Bs after consuming 174 metric tons of propellants.

Stage 2 assumes control of powered flight two minutes and 40 seconds after launch when separating from the spent core and firing up its YF-24B engine pack consisting of a 738.4kN YF-22B main engine and a four-chamber YF-23B that is in charge of steering and provides a thrust of 47kN. The 14.2-meter long stage shares the first stage’s diameter and holds 86.5 metric tons of propellant.

Separation of the protective fairing is expected three minutes and 30 seconds into the mission with the 12-meter long halves splitting open and dropping away to reveal the Shenzhou-11 spacecraft. The second stage main engine fires for precisely five minutes while the vernier keeps burning for another ~114 seconds to optimize the orbit of the spacecraft.

Spacecraft separation is expected just shy of ten minutes after launch into an orbit of approximately 200 by 330 Kilometers, inclined 42.8 degrees. Shenzhou-11 will quickly unfurl its power-generating solar arrays and stabilize its orientation in space to mark the start of the crew’s two-day commute to Tiangong-2 that will begin with orbit-raising maneuvers on Monday followed by the close rendezvous on Tuesday. Docking, likely to be completed in automatic mode, is set for approximately 19:40 UTC based on the orbital geometry between Shenzhou and Tiangong.